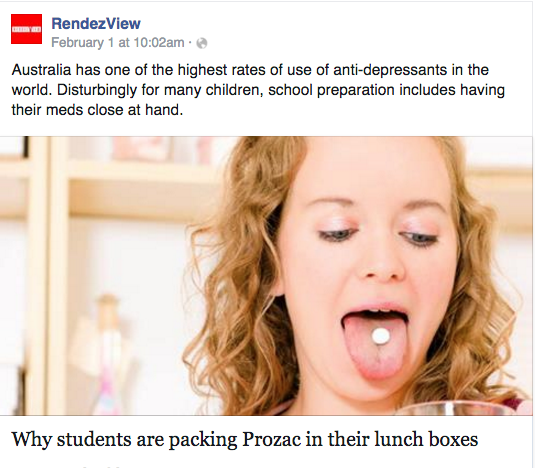 For more and more young people, the preparation for back to school this year will include making sure they have their anti-depressants close at hand.

Australia has one of the highest rates of use of these medications in the world and a recent University of Sydney study found that there has been a particularly marked increase in the use of these drugs in children and adolescents.

In fact, over the four-year period from 2009-2012, researchers found that the largest increase in use was amongst children aged between 10-14 years.

Dr Emily Karanges, now a research fellow in the Medicines Policy Unit at the University of NSW and lead author of the paper based on the study’s findings, suspects the rates of usage would be even higher amongst those who are school-aged today: “There is no reason to think this trend would have reversed. Given the steep upward trajectory in the rate of antidepressant use at the time of our research, especially among young people, I’d expect the figures now would be significantly higher again.”

Yet the therapeutic guidelines from the US, UK and Australia recommend that psychological therapies rather than medication be used to manage depression and anxiety of a mild or moderate severity, and that anti-depressants should only be used for severe disorders or when all other treatments have first proved ineffective. This is because these drugs are often less effective in depressed children and adolescents than in adults, and come with increased risk of self-harm and suicidal thinking.

Karanges also advocates for caution as: “The brain is still developing up to the age of 25 and antidepressants are a pretty blunt instrument. We know very little about how they might be changing the development of the brain and whether they might have long-term effects into adulthood.”

So what is driving this eagerness to medicate kids who need support?

Although counsellors and psychologists can’t prescribe medication, many are quick to suggest young people visit a GP to access these (it is not uncommon for this to be suggested as a solution even during an introductory counselling session). Concerned parents may then go to their GP specifically requesting drugs.

And many time-poor GPs report feeling ill equipped to treat mental health issues; according to the Black Dog Institute, in Australia GPs don’t have to have any specific training in mental health to practice.

Karanges points out that these types of medications are also heavily marketed to the medical community: “It is perhaps no coincidence that the anti-depressants that were most rapidly increasing in use were also the newest ones and the ones most likely to be advertised to doctors.”

GP’s may also have the misguided view these types of medications are relatively safe. A Danish study published in The British Medical Journey this week found that the harms reported in antidepressant trials were often seriously misrepresented and underreported, this included suicide attempts and suicidal idealation being coded in reports by pharmaceutical companies as “emotional lability” or “worsening depression”.

Reports issued by drug companies were, the authors said, “even more unreliable than we previously suspected”. The study concluded by recommending “minimal use of antidepressants in children, adolescents, and young adults, as the serious harms seem to be greater, and as their effect seems to be below what is clinically relevant”.

Instead, treatments such as psychotherapy and exercise were suggested.

It may also be that culturally, we are not always comfortable with the full spectrum of human emotions and are too eager to seek a quick fix.

Psychologist Jacqui Manning says she would be reluctant to suggest medication, particularly with a young person, until a range of other strategies had been tried first.

“I may see teens during highly stressful life events like the HSC exams or a breakdown or death in the family,” she said.

“Sometimes parents will say, ‘my child isn’t coping — do you think they need meds?’ I’ll respond that there are many things we can try first and that their son or daughter’s feelings are a normal human response to an extremely stressful situation.”

Whilst it is important not to stigmatise or alienate those young people who do genuinely need medication, Iain McGregor, Professor of Psychopharmacology at the University of Sydney, has called for time out on making medication our default response when supporting children and teens in crisis.

“We need to have a national debate about what is driving this phenomenon,” he said.

“Why are we so reliant on pills for the mental wellbeing of our young people?”

And what is happening that is making our kids feel so desperately sad in the first place?