I’ve had the opportunity to contribute to, and write, some really interesting pieces for various media outlets this week. I want to share the highlights with you here.

The always-wise Dr Karen Brooks unpacked the reluctance some (including our political leaders) have with the term “Feminist” here: Why is feminism such an uncomfortable word?

Increasingly, young women are afraid to align themselves with feminism in case it makes them a social pariah. They also feel too intimidated to join the often robust dialogue about what it means to be a feminist in contemporary times for fear of how they’ll be spoken to or silenced or (mis)understood. An example of this can be seen in Helen Razer’s response to Watson’s speech (“a boxed kitten makes great digital capital” – ouch).

This lack of generosity towards fledgling feminists and their position needs to be addressed.

Dannielle Miller, author and CEO of Enlighten Education, runs workshops with tens of thousands of young women every year. She says less than 10 per cent call themselves feminists even though most admit they’re not quite sure what a feminist is. But once they understand, they see it makes sense to be one. “After all,” says Miller, “why wouldn’t you believe in gender equality?”

I loved having the opportunity to contribute and offer an insight into how young women feel about the women’s movement. As I explained in a previous blog post, for me, finding Feminism as a teen girl felt very much like finding Home. Finally, a place where I felt known, understood, accepted and challenged! I still find the sisterhood to be the most incredible source of inspiration and validation. What a joy then to be able to introduce the next generation to a movement that is still very much needed – and in desperate need of their perspectives!

One of the ways in which I connect young girls to Feminism through Enlighten’s Real Girl Power workshop is through humour (which is a great way too of instantly debunking any “feminists can’t be fun” stereotypes). We begin by exploring what popular culture will often tell us girl-power should look like and deconstruct how the phrase has been used to sell women everything from cleaning products to super-stomach-sucking-elastic pants (irony much?). You may read more about this workshop here. 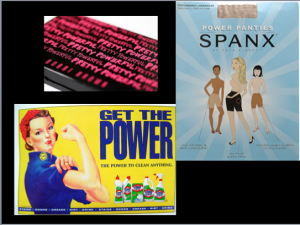 Ninemsn ran the results of a huge UK survey on teens conducted by the Schools Health Education Unit. The key findings?

The state of the economy is not just a bother for bankers — teenage girls seem to be absorbing the stress too, with a survey suggesting their confidence has dipped since the world was thrust into a Global Financial Crisis (GFC).

Cyber bullying is also taking its toll, according to the UK survey of 30,000 school students, with a third of 10 and 11-year-olds saying they fear being bullied.

Teens’ confidence ratings had been consistently improving between 1990 and 2008 when 41 percent of 14 and 15-year-old girls said they had a high self-esteem.

But that dropped in the following six years, with only 33 percent now saying they feel good about themselves.

Why might the economy may be impacting on girls in this way? I am quoted in the article: “Children are economically dependent on their parents and their families and those pressures filter downwards. Often the first things that tend to go are branded items, such as cosmetics and new clothes, which are the kinds of things that really matter to teenagers…Having the right shoes or brand of jeans can seem like such a critical thing for trying to fit in with a peer group. There also is social stigma about being the ‘poor kid’… I would imagine a lot of young people are feeling a sense of shame, which is impacting on their sense of self and their self-esteem.” I also helped explain why we may still be seeing huge concerns over body image and technology in this article so do check it out.

Finally, I wrote an Opinion piece for the Daily Telegraph on the art of being alone. Although this was aimed at all readers, not just those who care for young women, you may find some of the ideas on the art of connection useful.

More people are living by themselves than ever before. In fact one in 10 Australians live alone. Single, however, does not necessarily mean lonely. Countries with high levels of people living alone actually score well on international happiness ratings.

Is it because these solo artists are content in their own company?

Despite the popular rhetoric around the appeal of “me-time,” the reality is we are social creatures and need human interactions in order to be happy.

Social researcher Hugh Mackay, author of The Art of Belonging, argues that “communities can be magical places, but the magic comes from us, not to us”.

The key then is to learn how to venture out and connect. And even more fundamentally, to learn that it is OK to do so. It is this idea that I explored in my writing.