Skip to content
Were you surprised the recent Plan International survey on Sexism in the City showed that for most young women, experiences of street harassment are common?

If so, there’s a good chance you’re a bloke.

Because every woman I know has been catcalled, or followed on the street, or perhaps had a man lunge at her.

The first time I recall being sexually harassed in my community was when I was 12 years old, and just starting high school.

As I walked across a bridge with my friends, filled with nervous excitement about the new girls I might meet, and the stationery I had so carefully selected and packed in my shiny new sparkly pink pencil case, I noticed a man waiting under the bridge for us to pass.

I was so horrified that I ran straight to the local police station to report him. I’m not sure why the police never pursued this — although I do recall them laughing at me when they asked me what exactly I had seen him do and I replied, “wanking”; they hadn’t expected this ponytail-wearing schoolgirl to be quite so blunt. Their amusement only added to my feelings of powerlessness and humiliation.

But “The Wanker”, as all the girls at my school soon named him, remained waiting for us each morning for months. And eventually it became a game to run past him, yelling out our disgust. Shockingly, it no longer shocked me.

This was by no means an isolated incident. Plan International’s Report confirms that despite all the education campaigns aimed at reducing sexual harassment, most young women first experience intimidation when in a public space between the ages of 11 and 15 (I sometimes wonder if the very same men who find it amusing to yell out “show us your tits” to school girls as they drive past them at bus stops are the same ones who rant on social media about how paedophiles should be castrated).

In my work as an educator of teen girls, I often hear stories about intimidation and harassment. And I hear the type of advice given to young women in order to help keep them safe, “walk in groups” “follow your instincts and move away if you feel unsafe …”

These offerings are not designed to make girls feel that they are somehow to blame for a culture that often doesn’t seem to like them very much, nor to limit their freedoms. But rather because short-term, while we work to help change the type of culture that allows sexual harassment to flourish, providing our girls with scripts and strategies for keeping them safe feels essential.

I’ve had emails from three different school principals in the years since we have been running our in-school courses thanking us for giving their students the information they needed when they were in a potentially dangerous situation. On all three occasions, not only had the girls known how to respond to stay safe, importantly, they also knew it was not their fault that they had been targeted. As one principal emailed: “They felt angry rather than ashamed which is just as it should be.” Any protective advice given must be carefully framed within a context of unpacking victim blaming and emphasising why violence is always the fault and responsibility of the perpetrator, and never the fault or responsibility of the victim or survivor. 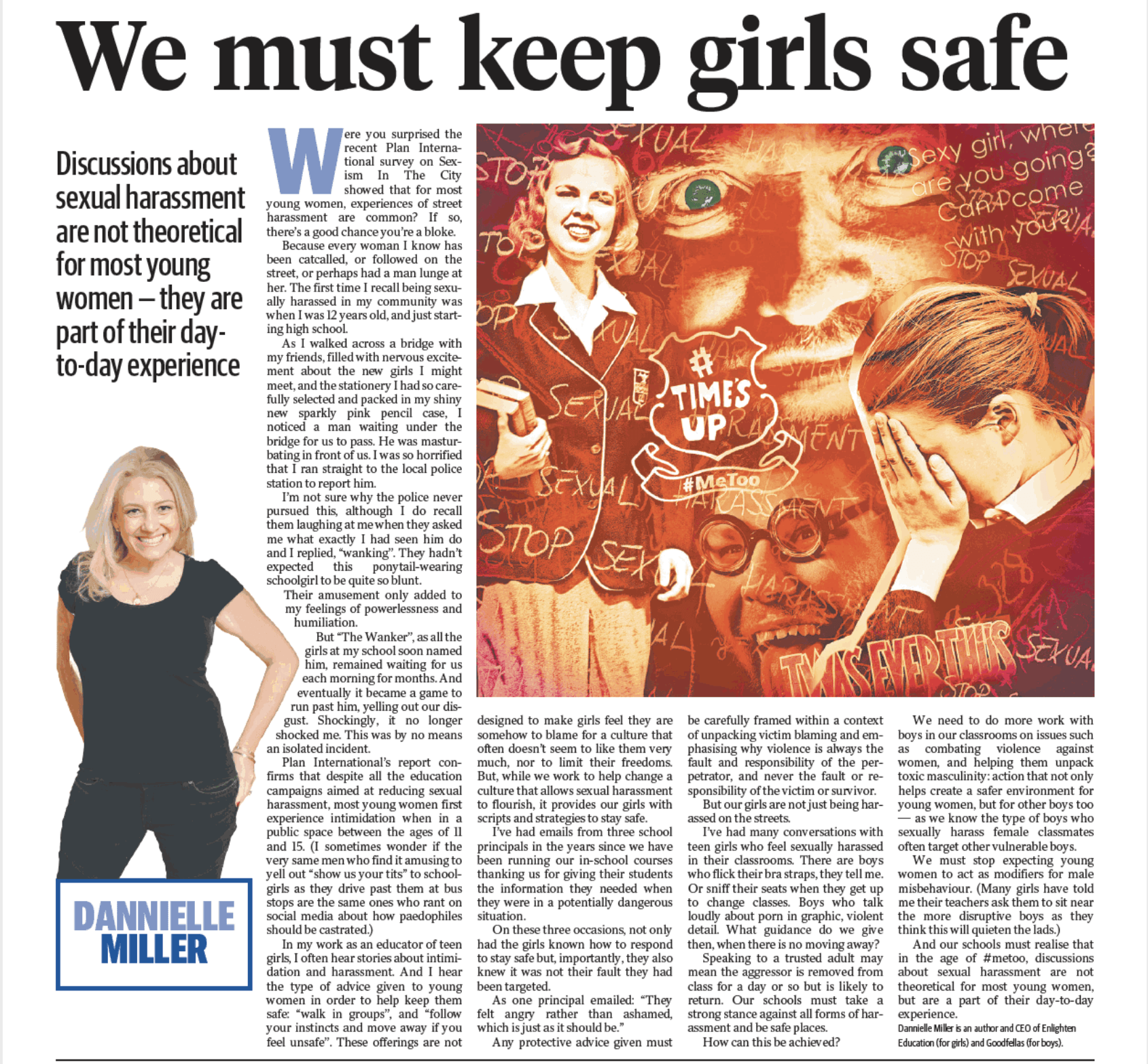 But our girls are not just being harassed on the streets.

Our schools must make a strong stance against all forms of harassment and be safe places.

How can this be achieved?

We urgently need to do more work with boys in our classrooms on issues like combating violence against women, and helping them unpack toxic masculinity — action that not only helps create a safer environment for young women, but for other boys as we know that the type of boys who sexually harass their female classmates often target other boys they perceive as being more vulnerable too.

We must stop expecting young women to act as modifiers for male misbehaviour. So many girls have told me their teachers ask them to sit near the more disruptive boys as they think this will quieten the lads. But as one 14-year-old girl told me “these boys are just gross and it’s not fair”. And she’s right, it isn’t fair.

And our schools must realise that in the age of #MeToo, discussions around sexual harassment are not theoretical for most young women — but are part of their day-to-day experience.

This post was originally published in The Daily Telegraph, 2/6/18