This post was first published in the Daily Telegraph and shared online at RendezView 4/1/16.

Thanks to the “every child gets a medal” approach to raising children, many researchers argue we are now dealing with a generation of entitled, fragile “teacup” kids.

It seems the self-esteem movement of the late 1960s, which encouraged parents to boost their child’s self-confidence regardless of any real merit, has had some undesirable and unexpected outcomes.

Professor Helen McGrath cautions that “a lot of the people who gloated about how to develop self-esteem are now writing about how this is actually a dangerous thing to do because what we are really doing is producing kids who are narcissistic… we focus too much on telling them how good they are, how wonderful they are, how everything they do is fantastic”.American Ethan Couch may well serve as the poster boy to warn of the dangers in overindulging our offspring. At 16 years old, he killed four pedestrians while drink driving then claimed in court that he suffered from “affluenza” — that he no longer knew right from wrong as his parents had never held him accountable.

When the judge seemed to accept this defence and sentenced him to 10 years probation rather than prison, his mother then helped him flee (after first holding a going away party for him).

Both mother and son were arrested by authorities in Mexico last week.

It’s clear that Mr Couch and his mother need to be given some long overdue time out — in a jail cell.

I’ve noticed that on social media, parents are now so loathe to appear to be boosting their child’s sense of self-worth that they begin posts with disclaimers such as “Warning: Proud Parent Brag”.

It strikes me as sad that we now feel worried about sharing our children’s triumphs for fear of being labelled as either pushy or posturing.

Because the real problem isn’t so much high self-esteem in kids, it is false self-esteem. 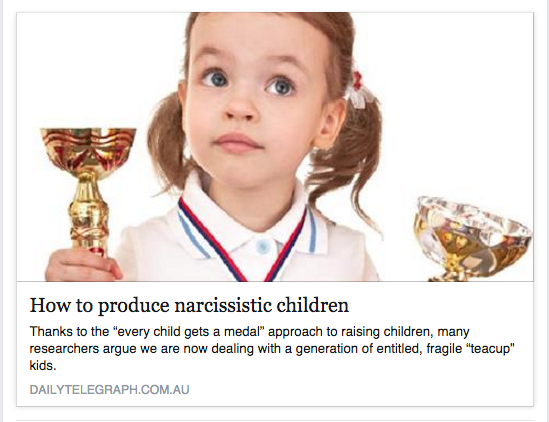 Real self-esteem is about appreciating the skills and abilities you do have, learning how to upskill, and also respecting the gifts others have (in order to value yourself, you must first value the person next to you). It is about competence and connectedness.

And praise is the food that helps children thrive — if it is evidence based and spooned out judiciously.

This year I’d love to see more parents proudly sharing not just their frustrations — after all, there’s a longstanding tradition that allows for eye rolling at our kids — but their triumphs too.

Your child blitzed their exams? Three cheers! They coped well with a loss at soccer and helped rally their teammates? Do tell. They’ve just started their own car washing business to earn extra pocket money? I’m sharing the news.

When achievements are truly noteworthy, I’m all ears.

And when praise is genuine, children are all ears too. Kids have a finely-tuned radar for falsities and can see that the ribbon they scored just for participating is really fairly worthless.