Angsting about the cultural goods young women enjoy and the impact these may have on their morals and intellect is, sadly, nothing new. When romantic fiction grew in popularity in the Eighteenth Century, there was widespread fear that female readers would be seduced into the arms of villainous cads or, perhaps even more alarmingly, away from their lives of domestic drudgery.

And while criticisms of how some reality TV shows treat their talent may be legitimate, the subsequent worrying and belittling of those who like these programs is a missed opportunity to better understand and engage with young women by simply asking them why they like these, because their responses may be less vacuous airhead, more profound philosopher.

When interviewing teen girls on why they loved watching Big Brother, Professor of Media at the University of Sydney, Catharine Lumby, was surprised when one young woman told her the appeal lay in how relatable it was. “She explained to me that her parents, teachers and peers all assess and monitor her. She argued that because she’s always under someone’s watchful gaze and being ordered about, she can relate to the contestants on the show.” Lumby was struck by how insightful this comment was, “Adolescence is a stage where we strive to form our own identities all whilst being judged by others. I can see why watching reality TV stars scramble to present themselves to their fellow contestants, and indeed to the viewing audience, in a favourable light might really resonate.”

We also mustn’t assume that teens passively absorb all the messages presented to them. These shows can be used as a tool to help them frame their own ideas around values and morality. Indeed, much of the joy in consuming them comes from the subsequent deconstructing, hence why Gogglebox (a reality TV show in which viewers watch TV and share their opinions on what’s on screen) is so intriguing to watch.

And while it’s hard to argue that some of the reality TV shows we like to binge aren’t trashy (I’m looking at you Too Hot to Handle) sometimes, one craves the viewing equivalent of a burger and fries over a steamed bowl of greens.

When my daughter and I recently watched Netflix’s new offering My Unorthodox Life together, I noticed we were simultaneously mindlessly scrolling through our phones and getting up and down for snacks. If we missed a shot of Julia Haart discussing her sex life, or of Batsheva plotting her life as a social media influencer, it really didn’t matter. The show demanded nothing more of us to tune in, and then tune out.

Queensland academic, Dr Sarah Casey, agrees that there’s nothing wrong with mindless viewing. She says, “Do we ask if people come away from watching the opera or Shakespeare plays being better people? No.” So, why should we feel guilty if we love Married at First Sight? “Hating on reality TV viewers is a form of classism.”

My advice? Don’t be a hater. You might even want to watch with your daughter, because while we’re quick to attribute influence to a novel or TV show, we are less likely to own that we have far more power to shape our own children. Get involved; ask her what she likes about certain characters, why she hates others, and talk to her about whether she thinks the way the stars are behaving is realistic, or staged (encourage her to fine tune her media literacy skills).

I recently admitted, rather sheepishly, to the editor-in-chief of this very magazine, Sarrah Le Marquand, that I was addicted to the bikini-clad shenanigans on Love Island UK.

“Don’t be ashamed,” she replied. “There’s no show you could possibly watch that would make me think less of you.”

“And besides,” she added, “I’ve been watching The Bold And The Beautiful on and off since I was in high school.” 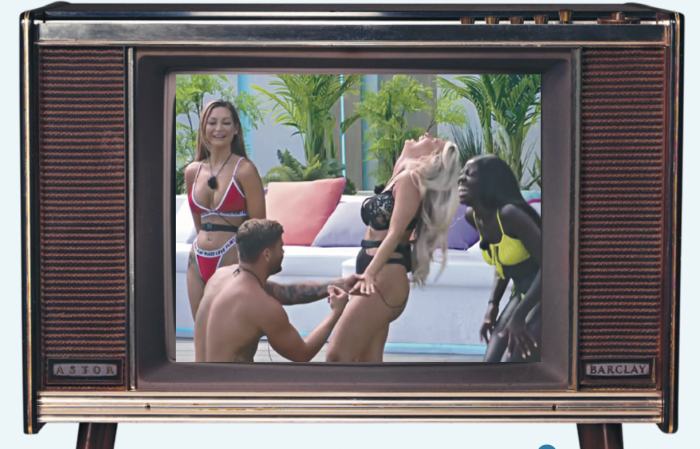 Why I watch –
I have a part time job, I’m a dedicated student, and I volunteer to support my local women’s shelter. Shows like The Bachelor, which I love, help me tune all that busyness out. But I also love the conversations they spark with my friends. For example, when Abbie Chatfield was on The Bachelor, she was criticised for being too forward with Matt but that is just such double standards! I mean Matt was the one dating multiple women! The most unrealistic part of reality shows is the fact they don’t show diversity – real beauty doesn’t always look the way it’s depicted on these shows. My friends and I are all beautifully unique, but we probably wouldn’t get cast on shows like the ones I watch.

This post was originally published in Body + Soul magazine nationally.