Kendall Jenner posting a picture of herself naked and draped over a tabletop wasn’t what caused controversy last week. It was the fact that she was holding a cigarette that ruffled feathers.

Ms Jenner may have added a Clinton-style disclaimer to her Instagram post telling her followers she never inhaled, but she’s far from alone when it comes to being a celeb who loves to pose brandishing a cancer stick.

Forget Prada — it seems the latest must-have accessory for celebs is the cigarette. In fact at the recent Met Gala, more celebrities took selfies of themselves smoking in the bathroom than prancing on the red carpet.

While the beautiful people are free to make whatever choices they desire with their own health, the real concern is whether their behaviour influences the choices of the hundreds of thousands of young people who look up to them.

Worrying about the impact celebrities might have on young people’s decision making is nothing new (although the 24/7 access young people have to the lives of those they admire is revolutionary).

It would be naive to assume the choices celebrities make don’t have any impact on their fans. The stars themselves literally bank on the fact they can shape minds, which is why they are paid millions of dollars to endorse particular products. Study after study shows too that seeing those we admire engaging in a particular behaviour (whether it be smoking, drinking or dieting) helps normalise this, and indeed may glamorise it.

It seems reasonable to expect that along with all the fame and fortune bestowed upon celebrities, there might also be a sense of social responsibility.

However, we do need to acknowledge that many young people are able to make discriminating choices about who they choose to follow (note that “liking” a celebrity doesn’t necessarily equate with approving of their behaviour either. Many teens tell me they follow particular celebs because they are fascinated rather than impressed by their lifestyle: ‘It’s a little like watching a car crash… ugly, but I can’t look away”) and indeed many young people express very little interest in the antics of the Kardashians, Jenners or any of their ilk.

Celeb Youth, a UK collaboration between Brunel University and Manchester Metropolitan University examining celebrity’s significance in the construction of young people’s aspirations, have identified that many of the beliefs we hold around young people and celebrity culture simply aren’t true.

For example, a young person’s interest in a celebrity doesn’t necessarily mean they want to be like them — they may instead be talking about that person in order to demonstrate they have cultural knowledge, or to use in order to frame their own ideas around values and morality, or to feel a sense of belonging with a certain friendship group.

The researchers also found that young people are no more likely to be influenced by celebrities, or to be less critical of the celebrity industry, than adults are. And despite the increased concern that teen “fangirls” will be more swayed by celebrities than young men might be, neither gender is more easily influenced than the other.

It seems too that while we are quick to attribute influence to a VIP, we are less likely to own that we have just as much power to shape our children as any reality TV star may have. Suggesting otherwise? All just smoke and mirrors. 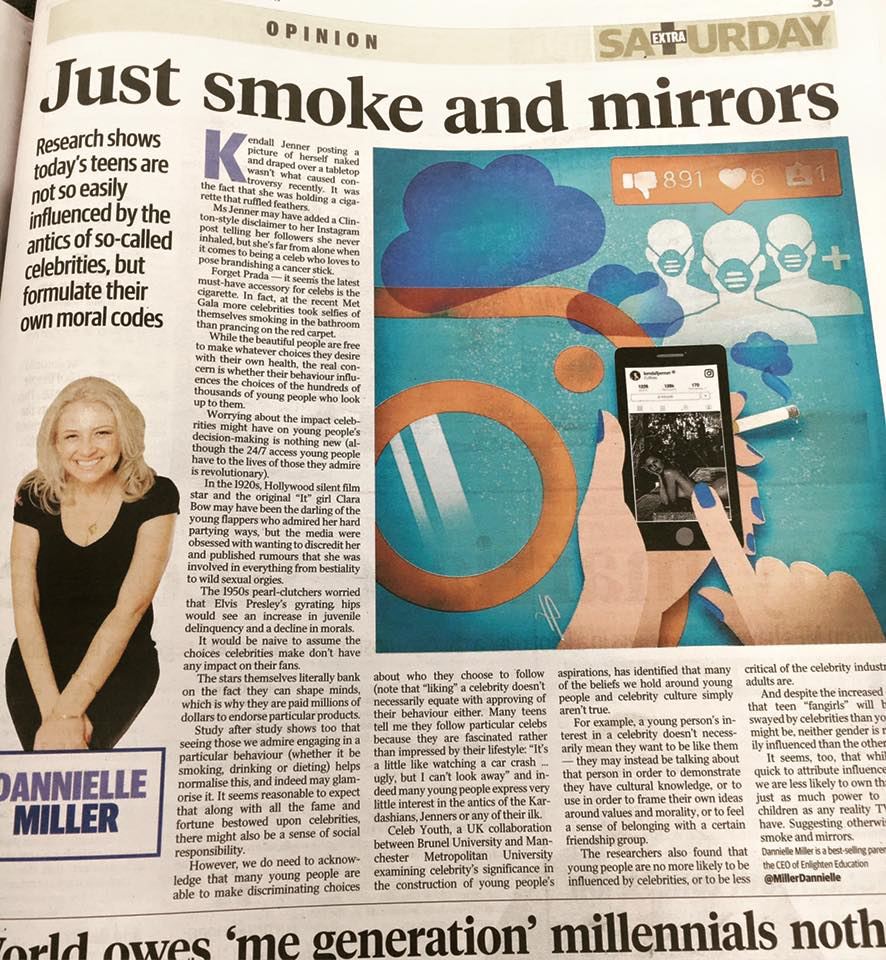