Did you happen to catch the debate on the sexualisation of children in the media (“Sex Sells – but at what cost to our kids?” ) on the ABC’s A Difference of Opinion,Thursday 27th September?  Enlighten’s Victorian Program Director, Sonia Lyne, was present.

I thought the program had interesting moments although the issue did tend to get confused. The real issue set for debate was whether pre-pubescent children are being inappropriately portrayed in a sexual way by the media and having sexy, adult type products directly marketed to them. Associate Professor Catherine Lumby constantly interjected and instead seemed to want to discuss the need for teen girls and women to have the freedom to express their own sexuality – which of course no one on the panel was disputing!

One suspects that Ms Lumby’s historical references were simply an attempt to flex her academic muscle – there was much toing and froing over whose research had the most credibility. Mmmm. I would have loved to have been there and offered a practitioners perspective… the various experts made much of statistics and their recent contact with small handfuls of girls in focus groups. We work closely with over 200 girls each week and I can confirm that although they are incredibly media savvy, they are still vulnerable and susceptible to media messages (if they weren’t why would marketers produce such advertisements?!) and they are not happy!

One positive that came out of the program was the consensus on both sides that education is really important and that all young people need to be critical viewers of popular culture. Although I do not think the media is solely responsible for the sexualisation of children and the objectification of women generally, I do think it plays a key role.

I love the idea of encouraging girls to talk back to the media and share images of women that are positive and affirming (perhaps by creating their own “Hall of Fame”) and by naming and shaming some of the exploitative, inappropriate messages that they will no longer tolerate  – “The Wall of Shame.” This idea is further developed in the video entitled “Girls, Sexuality and the Media” in my VidPod, here girls also become “culture producers not just culture consumers.” Fabulous.

Got me thinking about my own “Hall of Fame” and “Wall of Shame”…. these need not be ad’s that exploit and sexualise young children, rather ad’s that generally objectify women and make us feel less than we are.

I had to restrict myself to just a couple in each category as I have work to do and could easily get carried away here and go for days 🙂 Help me out –  feel free to comment and add yours!

The Hall of Fame

As mentioned in a previous post, love the slogan for their new women’s range (“Sport is not an obligation. It`s a game. So play. And have fun. It`s up to you. Throw away expectations. And surprise yourself along the way. Impossible is Nothing.”) also loved their ad. featuring Jodie Henry looking strong and confident – also pleased at the the lack of gratuitous flesh we are so used to seeing in most sport ad’s! 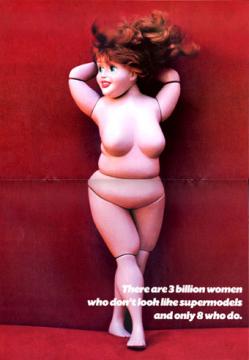 An oldie but a goodie featuring Ruby the anti-Barbie. It still makes me smile. I thought it appropriate to include too given Anita Rodderick, Body Shop founder, has recently died. Love the slogan ” There are 3 billion women who don’t look like supermodels and only 8 who do.”

The Wall of Shame

Unilever and the Lynx ad’s –

Talk about on the nose…beautiful young women who gyrate uncontrollably and strip at the mere sniff of this cheap, nasty aftershave!

And to add injury to insult, the men featured are so damn inappropriate – in one ad. the “sex magnet” is a medical practitioner ( a Dentist – is there any more vulnerable position to be in than with a mouth full of instruments?) whilst another features a girl cavorting wildly in front of her boyfriends elderly father! All so Freudian and horrible.

Lynx’s target market for this campaign is 14-15 year old boys. Gee, thanks for fostering respect for girls in our young men Unilever! As mentioned in a previous post, Unilever also own Dove and whilst promoting this rubbish for boys, they are pushing their Real Beauty campaign on young women…GRRRRRR. I’ll say it again – MIXED MESSAGES. 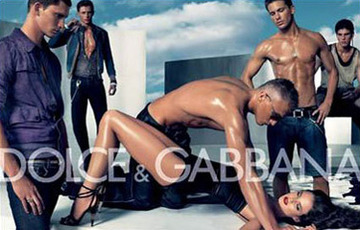 Thank goodness this ad.was banned in Europe as it clearly glorifies violence against women. It is not a new “angle” for D & G though; a number of their campaigns have featured violent images of both women and men in pseudo-rape scenes. I have tried to ease my conscious for years as theirs also happens to be my favourite perfume but this was the last straw! I have thrown all my D&G perfumes out. 🙂 Ahhhhh…purse power.

The ad. below is an older one (2003?) for American Jewellers Natan ( a large prestigious jewellers who have a reputation for producing ad’s that are incredibly demeaning!). I thought this one was so woeful that I googled it to check its authenticity. Sadly, it was the real deal. Thank goodness I don’t have a rock from Natan or that would be binned too! 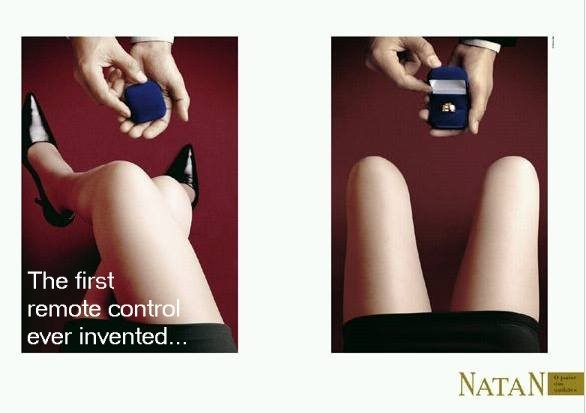 5 thoughts on “Talking back to the Media”