Netflix’s Stranger Things series features a band of Dungeons and Dragons playing, science-loving geeks who have won over audiences by displaying tremendous courage in the face of supernatural forces of evil, and the horrors of hormonal changes.

The show pays homage to 80s cult films such as Stand By Me, E.T. and The Goonies; films that also presented motley crews of unlikely heroes and heroines.

Yet while we are keen to embrace a broad spectrum of what courage can look like on our screens, it seems in real life we are not quite as willing to acknowledge that our kids can earn bravery badges in other ways besides the more tangible conquering of a physical challenge.

Which helps explain why parents may get frustrated if their child happens to be reluctant to leap off the high diving board at the public pool — and why almost every school camp aims to build up bravery by requiring kids to navigate ropes courses and abseil.

I recall loathing this dastardly duo when I was at school; “You’ll feel so proud of yourself once you’ve completed this!” the perky instructors would insist as I tried to explain why I had zero interest in testing myself by clambering backwards off a cliff face. But as you can rarely debate your way out of these activities, I was always, eventually, forced to participate. Afterwards, all I really felt was glad the whole public ordeal was over (and angry at the adults who insisted this was good for me: at the time I was dealing with a myriad of family issues that required great courage to navigate alone. Frankly, I had bravery burn out).

Perhaps due to these type of negative experiences, as a high school teacher, I sought to notice other types of bravery such as emotional and social courage in my students too — and there was plenty to acknowledge. There were the kids who stood up to their peers when they didn’t agree with their behaviour, the young people who were managing violence or absent parents within their homes, the teens who built up the courage to ask their crush to the school formal (despite their trembling hands and quivering voices). No climbing ropes in sight.

I also told my students stories; tales that featured plucky young people who used their wisdom and wit to conquer dark things. And I encouraged them to write their own courage narratives — to articulate a time when they had stepped up, or taken a risk.

The beauty of focusing on the brave? It grows.

Clinical psychologist Andrew Fuller, who specialises in working with young people, argues we should be more actively teaching the type of courage that moves beyond taking a physical risk and instead requires young people to take social risks; “Physical bravery is actually often easier (we may be merely acting on impulse in these moments).”

Fuller talks of the importance of being on “a continual treasure hunt” with our kids. This does not imply we should praise their every thought and deed (a path that may foster narcissism). Rather, we should be on the look out to help them identify and be inspired by moments of courage both in themselves, and in others.

In season one of Stranger Things, Mike tries to inspire his friends to help them look for their missing mate Will by reminding them of his bold and selfless play during a recent marathon game of Dungeons and Dragons. “He could have played it safe but he didn’t. He put himself in danger to help the party.” The boys agree that they need to follow Will’s example; they will apply what they have learnt about courage through playing a board game to the frightening real-world predicament that are now facing.

Perhaps we need a reminder too; our children can, and do, draw on various types of courage to slay all manner of monsters. 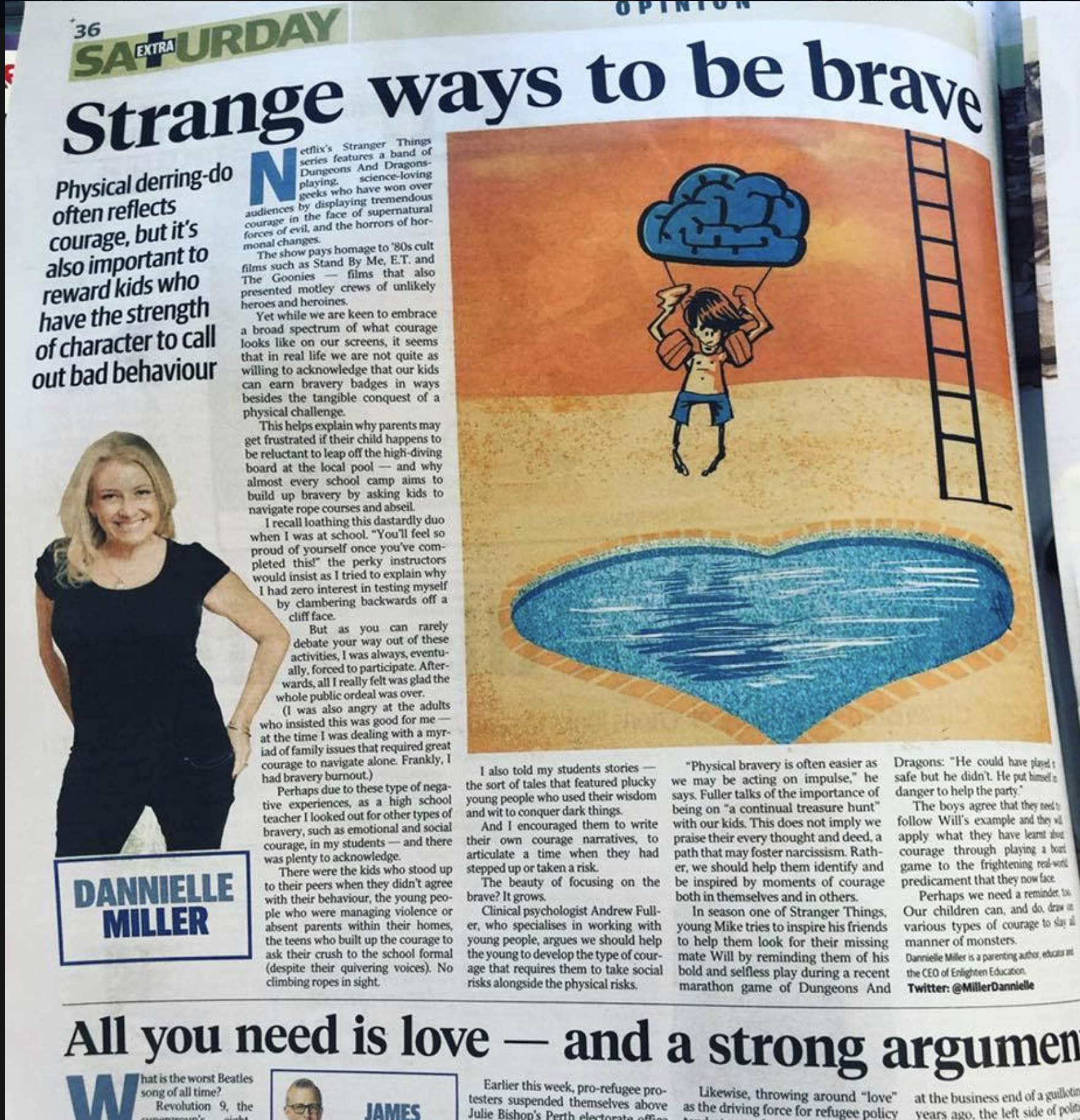 This post was originally published in the Daily Telegraph, 11/11/17