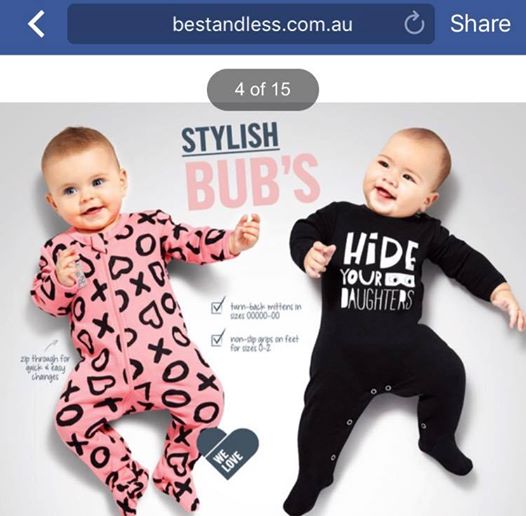 “I’m only here for the ladies.”

You might expect to see these kind of slogans brandished across a T-shirt worn by Benny Hill or Hugh Hefner; by a bloke who hasn’t yet got the memo that being viewed as a player is no longer fashionable.

But thanks to Best & Less, these very slogans are being offered up for babies in its latest catalogue. Heteronormative stereotyping and sexism sold from a tiny size 000.

It would be tempting to dismiss these baby rompers as nothing more than a bit of harmless fun. But why must we impose limiting gender stereotypes on little boys and encourage others to view them as having one-track minds, or more bizarrely still, as the type we need to protect our daughters from?

Messages like these sow the seeds for stereotypes that harm both men and women.

And while much has rightly been made on how viewing girls and women as mere prey harms them, there has not been as much discussion on how these type of attitudes harm boys too.

Dr Andrew Smiler, author of Challenging Casanova: Beyond the Stereotype of the Promiscuous Young Male, argues that stereotypes that view boys and young men as being barely able to control their sex drive risk becoming a destructive self-fulfilling prophecy. These beliefs may lead to destructive hyper-sexuality, unwanted pregnancy, and less fulfilling relationships.

He argues too that despite the cultural assumption that boys only ever want one thing, the reality is that many young men yearn for far more than a mere conquest when they are dating. They want companionship, connection and emotional support.

In the course of my work with young men in schools through the Goodfellas program, I have found that when we first introduce the topic of male sexuality there is initially much chuckling and bravado in the room. But once my male presenters start to unpack the stereotypes, they see shoulders drop in relief and there is always a respectful, genuine interest in having a different conversation.

The boys we talk to report feeling cultural pressure to date and to be promiscuous. Those who don’t conform to the message that all boys just want one thing start to question whether in fact they are normal.

This from 15-year-old James: “I have lots of girls as friends but that doesn’t mean I only like them as I want to do something to them. To be honest, they (girls) are sometimes easier to talk to than my mates. It’s insulting to me, and to them, to imply otherwise.”

Indeed it is. And it’s vital we give all our young people the skills they need to critically assess culture in this way.

As an educator and mother to a daughter, I have given her the skills she needs to question and talk back to marketing messages and media portrayals of women that would limit her.

And I’ve given the same gift to my son too.

Because messages that would reduce baby boys to their penises? They’re for dummies.