It’s the deceptively unhelpful piece of advice that every well-intentioned adult has at one point issued to a child: “You should be friends with everybody!”

Admit it — who among us, parent or not, has not acted as unofficial cheerleader when discussing playground friendships with a young child? Fearful that they might fall into the trap of becoming a bully, we urge them to make friends with everyone. As in, EVERYONE, whether they like them or not.

Amid all the positive messages that were shared yesterday as part of the National Day of Action against Bullying and Violence, the edict “You should be friends with everybody!” was the one sentence I dreaded hearing.

Although well intentioned, it ignores the complex dynamics of human relationships.

The truth is, we are not going to like everybody, all the time. And it’s not only OK to acknowledge that — it’s healthy.

It seems we’ve become so hyper-vigilant against bullies that every playground disagreement, or failure to be invited to a party, is now catalogued as evidence of bullying.

And it’s not just the kids who need educating. Parents are becoming increasingly quick to call schools to express concern that their child has been bullied when in reality, their child has experienced one of the many garden variety friendship fall outs that we all face at some point.

“There are kids who find school hell as they are subjected to ongoing campaigns of intolerance,” a colleague told me. “I’d much rather see resources poured into resolving this rot than in dealing with the tide of parents who call before their child has even had an opportunity to flex their own conflict resolution muscles.”

It’s problematic too that the friendship police often target girls. Any reluctance to have another student sit with them is viewed as evidence of mean girl machinations. Any whispered discussion about their classmates sees them labelled as gossip girls.

Given young women are expected to be paragons of acceptance and inclusivity is it any wonder that some grow up to unable to recognise unhealthy relationships and struggle to set boundaries with those who would hurt them?

The reality is that there are intricate sets of rules that govern the relationships between all young people (boys and girls) and much of the behaviour we are so quick to demonise is how they solidify friendships and practice social manoeuvring.

After all, don’t we as adults have particular mates that we prefer to spend our free time with? Don’t we also find it cathartic to vent to our inner circle when someone annoys us?

It’s far more empowering and realistic to let our kids know they don’t have to be friends with everyone — but they should be friendly.

It’s OK to not invite someone to your party, but don’t boast about the event in front of them. It’s understandable that you may not want to sit with a student you don’t have much in common with, but you could still smile at them when you see them in the playground. It’s natural that you might want to discuss someone who has hurt you with your mates, but be discreet.

When we give permission to our young people to behave authentically, within a framework of mutual respect for others, we are showing them that we don’t just value the feelings of others, but we value their feelings too.

And when they don’t feel forced into faux friendships, well it’s then our young people might just surprise us (and themselves) by realising that kid they initially didn’t like is actually kinda cool. 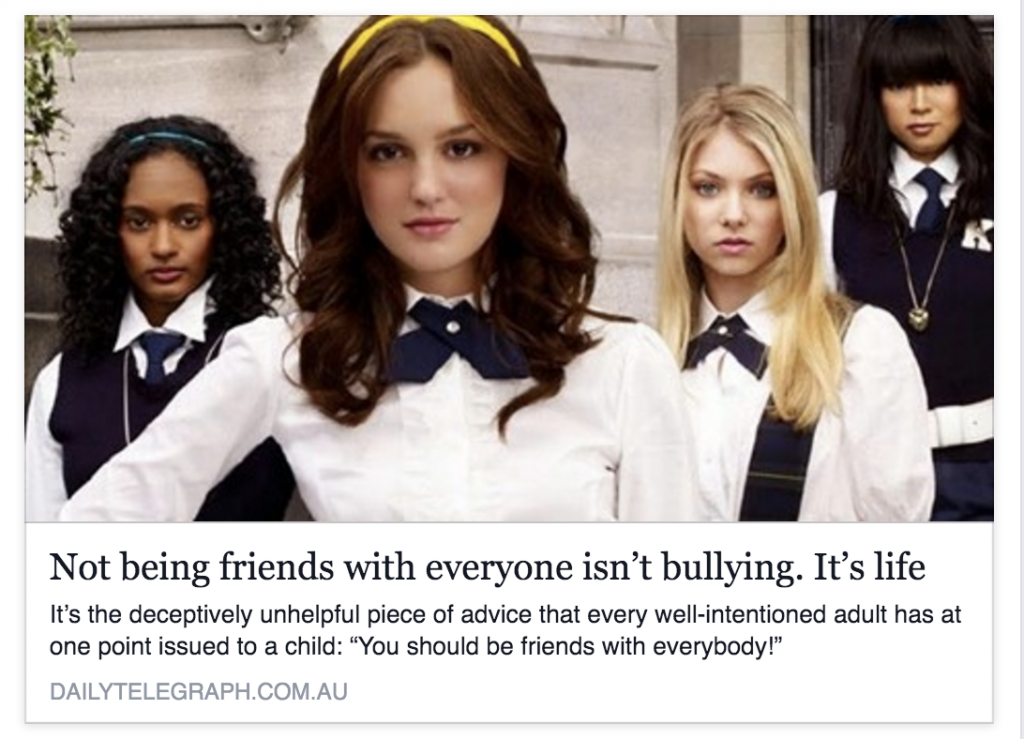 This post was first published by the Daily Telegraph newspaper, 19/3/16 and online at RendezView