On Sunday I woke to the news in the Telegraph that teenage girls were “riddled with fear and anxiety” and, overdosing on paracetamol.

Was this behaviour really impacting on an entire “generation” as the article claimed?

The reality is that although the data cited from the NSW Health Report on the Health of Children and Young people Report (2014) does show self-harming behaviours have increased from between the periods 1993-1994 and 2012-2013, even now, at its peak, hospitalisation rates for intentional self-harm for females aged 15-24 effects 0.46% of the 100,000 surveyed. Hardly a generational scourge.

Yet even one girl resorting to self-harming behaviours is a girl too many.

We should be concerned about the mental health of all young people. And if we are serious about concerns over self-harming behaviours in young people, then we should be taking to the streets in protest over the very high rates of self-harm reported in children currently in detention. The recent Australian Human Rights Commission Inquiry found from January 2013 to March 2014, 128 children aged between 12 and 17 engaged in actual self-harm and 171 threatened self-harm in detention.

But there’s something else we should be concerned about  too. And that’s the way in which we discuss young women. Because it is really not helpful.

If the times we live in are toxic for girls in many ways — think of the huge pressures on them to be not only thin and hot but to be smart and successful; to be everything, all at once —then equally toxic is the way in which the media and our society often chooses to engage with them.

When we are not reducing them all to damsels in distress, we are shaming them as viscous vamps, obsessed with taking “selfies”. There is a salacious pleasure taken in critiquing their mean girl cyber exchanges. In lamenting the length of their skirts. In hyper analysing their every mistake.

Even those who should have teen girls’ best interests at heart, the people who write parenting books, often describe teen girls in terms that are less than kind or generous of spirit. Walk down the parenting aisle of any bookstore and you’ll find plenty of covers depicting adolescent girls as sluttish or surly. As one girl said to me after a seminar, ‘If I came home and found my mum reading a book that presented girls in the way some of these books do, I’d be so hurt. We don’t read books entitled Parents are Pains in the Arses, do we?’

The reality is that whilst certainly girls do live in changing times and are learning to navigate and make sense of the always –on cyber world, the beauty, fashion and diet industries’ obsession with pushing a narrow ideal of what makes a woman loveable, and increased academic and workplace pressures, so too are we all.

And you know what? We mustn’t loose sight of the fact that many girls are doing remarkably well despite all this.

Case in point? The incredible teen Sophie Delezio whose story also appeared in the Telegraph right under the expose on teen girls and self-harm in my news feed. Ms Delezio is one feisty female; after surviving both horrifc burns and later being run over by a car, she is now thriving in Yr 9 at a girls’ school and setting a goal to compete at the 2020 Paralympics as a rower.

It seems too we have a generation that are also not as self-obsessed as we’d like to paint them as being. 80% of Girl Guides over the age of 10 commit two or more hours each week to volunteering; almost double the amount of time contributed by adults.

Anecdotally, as an educator who works with thousands of teen girls every year across Australia I’ve observed that girls are doing remarkably well in a culture that often doesn’t seem to like them very much, or have much faith in their decision making capacity.

Stories about girls in crisis are valid and valuable for they alert us to the challenges they face. But make no mistake, for every media report of girls in crisis, there are statistics and stories aplenty of remarkable young women doing extraordinary things.

Let’s not be blinded by the numbers.

Let’s not be blinded either to the strength and resilience of girls. 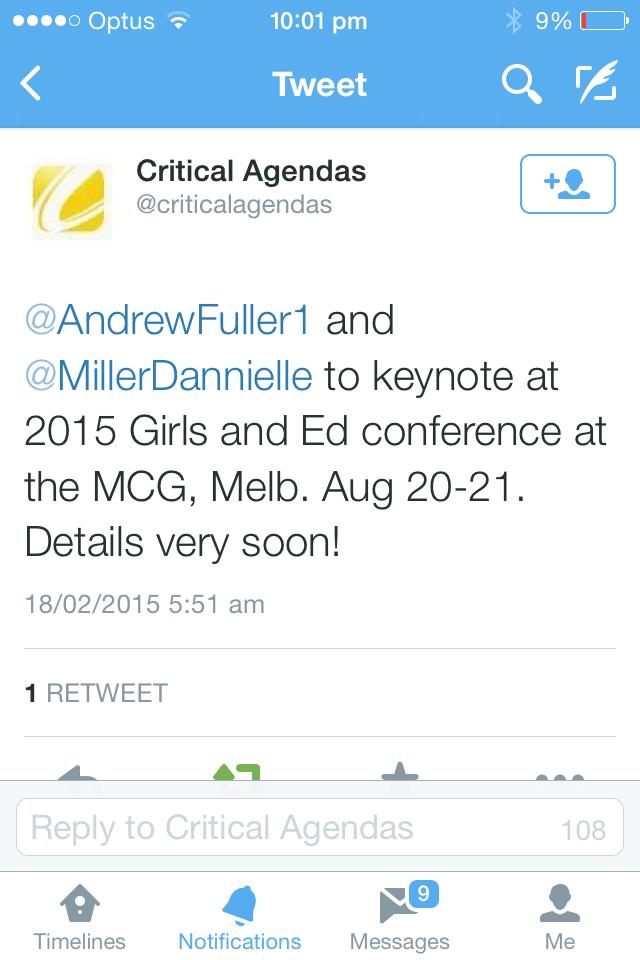 I shall be the opening keynote speaker at the Critical Agendas Girls and Education Conference in August, Melbourne. My talk will expand on these ideas:

“Beyond Victimhood: Why girls need to reclaim their agency and how many young women already are.”

Sexting, cyber -bullying, dieting, drinking. Whilst it is vital to acknowledge the issues that some girls do struggle with, so often the dialogue veers towards labelling girls as victims or shaming them. How can we move towards empowering girls to respond resiliently when faced with life’s inevitable challenges and a culture that doesn’t seem to like them very much? How are some girls already speaking out and reclaiming their girlhood?

What can schools do to further empower young women?

Hope to see you there!