This post was originally published by The Daily Telegraph 16/7/16 and online at RendezView. 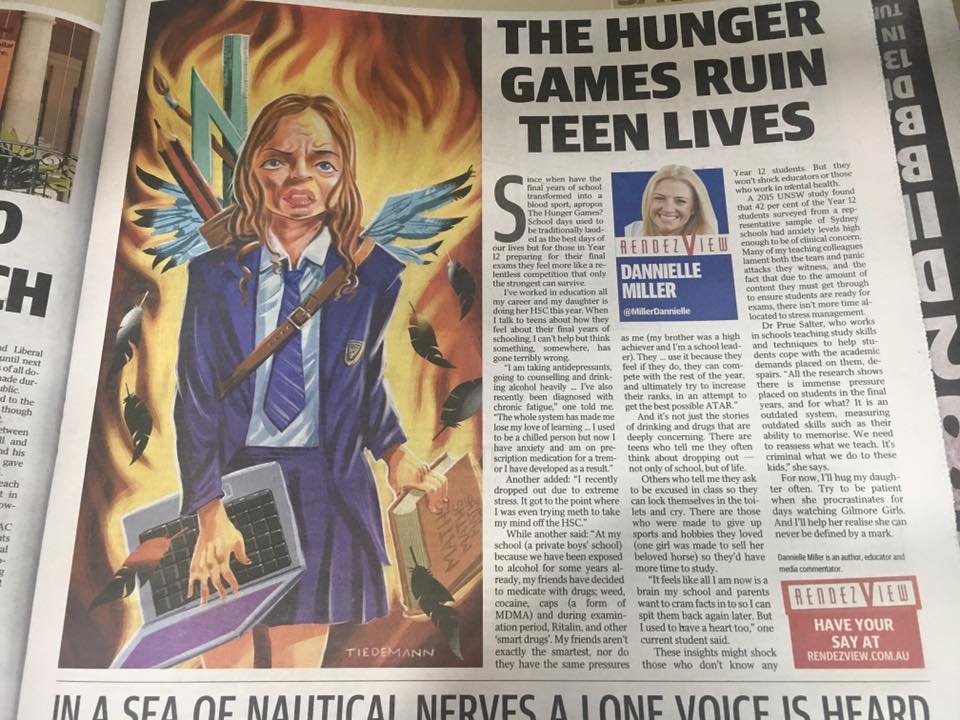 Since when have the final years of school transformed into a blood sport, apropos The Hunger Games?

School days used to be traditionally lauded as the best days of our lives — but those in Year 12 preparing for their final examinations feel more like they’re in a relentless competition that only the strongest can survive.

I’ve worked in education all my career and my daughter is doing her HSC this year. When I talk to teens about how they feel about their final years of schooling, I can’t help but think something, somewhere, has gone terribly wrong.This is what some of them told me:

“I am taking antidepressants, going to counselling and drinking alcohol heavily… I’ve also recently been diagnosed with chronic fatigue.”

“The whole system has made me lose my love of learning… I used to be a chilled person but now I have anxiety and am on prescription medication for a tremor I have developed as a result.”

“I recently dropped out due to extreme stress. It got to the point where I was even trying meth to take my mind off the HSC.”

“At my school (a private boys school) because we have been exposed to alcohol for some years already, my friends have decided to medicate with drugs; weed, cocaine, caps (a form of MDMA) and during examination period, Ritalin, and other ‘smart drugs’. My friends aren’t exactly the smartest, nor do they have the same pressures as me (my brother was a high achiever and I’m a school leader). They… use it because they feel if they do, they can compete with the rest of the year, and ultimately try to increase their ranks, in an attempt to get the best possible ATAR.”

And it’s not just the stories of drinking and drugs that are deeply concerning.

There are teens who tell me they often think about dropping out — not only of school, but of life. Others who tell me they ask to be excused in class so they can lock themselves in the school toilets and cry. There are those who were made to give up sports and hobbies they loved (one girl was made to sell her beloved horse) so they’d have more time to spend on studying.

“It feels like all I am now is a brain my school and parents want to cram facts in to so I can spit them back again later. But I used to have a heart too.”

These insights might shock those who don’t know any Year 12 students. But they won’t shock educators or those who work in mental health. A 2015 UNSW study found that 42 per cent of the Year 12 students surveyed from a representative sample of Sydney schools had anxiety levels high enough to be of clinical concern.

Many of my teaching colleagues lament both the tears and panic attacks they witness, and the fact that due to the amount of content they must get through to ensure students are ready for exams, there isn’t more time allocated to stress management.

Dr Prue Salter, who works in schools teaching study skills and techniques to help students cope with the academic demands placed on them, despairs of the current system.

“All the research shows there is immense pressure placed on students in the final years and for what? It is an outdated system, measuring outdated skills such as their ability to memorise,” Salter says. “We need to reassess what we teach, and how we assess that. It’s criminal what we do to these kids.”

For now, I’ll hug my daughter often. Try to be patient when she procrastinates for days watching Gilmore Girls. And I’ll help her realise she can never be defined by a mark.

One thought on “Year 12: Welcome to the Hunger Games”