Holy anticipation! Has there ever been more patient fans than Wonder Woman’s legion of loyal supporters?

They have had to sit through no less than 10 Superman films, nine Batman movies, two productions dedicated to an obscure DC character known as the Swamp Thing and a stand-alone feature for Justice League lightweight Green Lantern before finally getting to see Princess Diana of the Amazons strut on to the silver screen in her iconic red boots on June 1st.

And frankly, the timing couldn’t be better.First marketed in the 1930s, comic books became a national obsession with children yearning for escapism from the economic bleakness and political instability that defined the world they lived in. And yet, as with most things beloved by young people, by the 1940s there was a backlash by those who considered comics to be guilty of the moral panic double-whammy: promoting violence; and inspiring inappropriate sexual thoughts.

In response to these concerns, All-American Comics hired William Marston, a highly regarded psychologist, to bring some credibility to their publications. And it was he who created the raven-haired, star-spangled pant-wearing yielder of the golden lasso of truth.

From the outset, the agenda was clear. A press release issued when the character debuted declared that, “Wonder Woman was conceived by Dr Marston to set up a standard among children and young people of strong, free, courageous womanhood; to combat the idea that women are inferior to men, and to inspire girls to self-confidence and achievement in athletics, occupations and professions monopolised by men” because “the only hope for civilisation is the greater freedom, development and equality of women in all fields of human activity”.

Who said men can’t be feminists?

And while Wonder Woman may have the power to compel baddies to speak the truth to her, and to deflect bullets with her bracelets, her real power has always been in the girl power she personifies — hence the women’s movement has had a longstanding affiliation with her (Ms. magazine even had her adorn the cover of their launch issue, calling for her to be President).

The symbolism seems to have gotten somehow lost more recently when, to celebrate Wonder Woman’s 75th birthday, the United Nations announced she would be made an Honorary Ambassador for the empowerment of women and girls. Previous honorary ambassadorships have been given to fictional characters such as Winnie the Pooh (for friendship) and Tinkerbell (for the environment). In a bizarre case of your-skirt’s-too-short shaming, an online petition branded WW as too sexy for the role. She was quietly loaded back on to her invisible jet and sent flying.

Yet ask any little girl and they will tell you that there is much more to Wonder Woman than any sexualised interpretation.

Eight-year-old Geli says she loves her: “Batgirl and Supergirl were just sidekicks. Wonder Woman is her own person and the most epic ever.”

Then there’s six-year-old Saskia who believes: “She is the strongest of the DC Superheroes. But what I like best is that she is super kind, like my mum.”

Three-year-old Ivy notes that “Wonder Woman is good because she doesn’t care about pretty dresses, she just wants to kick bad dudes’ butts”.

Devoted fan five-year-old Samantha chose to go as Wonder Woman for her school dress-up day last week. Why? “Because she is fast and strong to look after everyone. She’s the strongest Princess in the world!”

If this week and the horrific events in Manchester have shown us anything, it is that little girls desperately need a symbol of female strength, love and justice.

And they need an escape from the uncertainty that defines the world they now live in too. 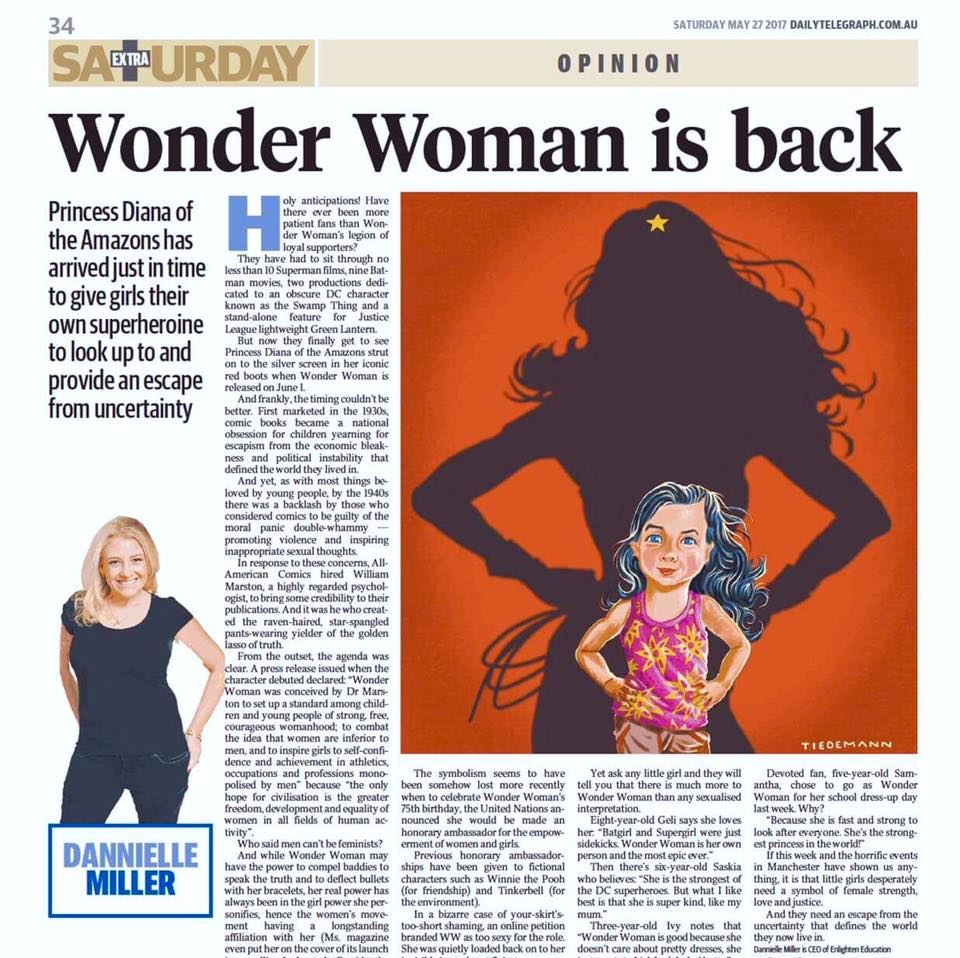 This article was first published by The Daily Telegraph, May 27th, 2017 and online at RendezView.