Skip to content
There has been much in the media over the last month about the sexualisation of children. I have considered entering the current debate on art versus porn, yet I feel that so much has already been said. The links below will provide an insight into some of the arguments that are still raging:
Art or not, it’s still exploitation – Steve Biddulph, The Age, May 28th. 2008
Moral Backlash over sexing up of our children – Miranda Devine, Sydney Morning Herald, May 22nd, 2008
Art not p*rn – Catherine Lumby, The Age, May 25th, 2008
Bill Henson? P*rn culture? Get real – Duncan Fine, Crickey, May 30th, 2008
I am encouraged by the fact that so many people feel passionately about this issue – have we finally reached tipping point? We must debate, discuss and get passionate about the welfare of young children. We also need those who will question and who will stand up and raise the alarm when they feel children are being exploited – we do not necessarily need to agree with them on every occassion, yet surely we should still applaud those who bother to speak up? In an attempt to recap some of the underlying issues around the sexualisation of children that are fueling the flames, I wanted to share with you a guest post this week by Dr. Robyn Silverman, an American body image specialist and parenting expert.

Dr. Robyn writes a popular parenting blog and advice column and her tips have been highlighted in Parents and Prevention Magazines, the Washington Post, and the nation radio show with Dr. Drew Pinsky. For more information or to contact Dr. Robyn, visit her Powerful Parenting Blog at http://www.DrRobynsBlog.com, her body image blog; http://www.KissMyAssets.Wordpress.com, or her website; http://www.DrRobynSilverman.com. This post begins by critcising the Dereon clothing range for children launched about six months ago in America – it caused an outcry there and rightly so.
Do things really need to get this overt here too before we sit up and take notice?  Hope not. Let’s keep raging, debating, and questioning until we get it right. 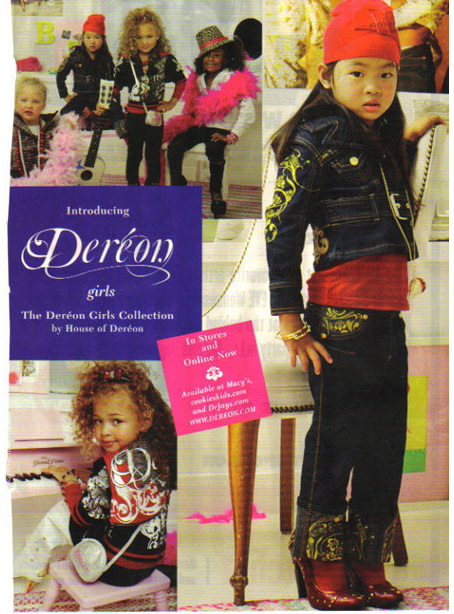 Welcome to “Girls Gone Wild,” Little Tykes Addition. These ads featuring Dereon Girls clothes ( a clothing range designed by Beyonce’s mother)  might provide a momentary laugh if they came out of an old “dress-up box” or if the girls were doing a mock “Pussy Cat Dolls presents Girlicious” audition. But the idea that they’re aimed for public view is alarming.

Still raw from the Miley Cyrus Mess, people are weighing in and they’re not happy with what they’re seeing.

If you thought the soft-porn image of Disney teen queen Miley Cyrus – wearing nothing but ruby-stained lips and a bedsheet – in Vanity Fair magazine was disturbing, you ain’t seen nothing yet. [The young models] are seductively posed and tarted up, JonBenet Ramsey-style, with lipstick, blush and face powder…The creepiness factor is heightened by the fact that women were responsible for marketing this child exploitation. So, what’s next? Nine-year-olds performing stripper routines?

So why are these sexualized images such a problem?

Media, such as magazine ads, TV, video games, and music videos can have a detrimental effect on children.

Not only has the sexualization of girls and women in the media lead to mounting public concern, researchers continue to find that the images can have a profound affect on the confidence, body image, dieting behaviors and sexual development of girls. Dr Eileen Zurbriggen, associate professor of psychology at the University of California, Santa Cruz and the chair of the APA task force on the sexualization of girls is scrutinizing these issues;

“The consequences of the sexualisation of girls in media today are very real,” said “We have ample evidence to conclude that sexualisation has negative effects in a variety of domains, including cognitive functioning, physical and mental health, and healthy sexual development.”

What do they mean by sexualization?

When researchers speak of sexualization, they’re referring to when a person’s value come from their sexual appeal (looks) or their sexual behavior and when the person is looked upon as a sexual object, to the exclusion of other characteristics such as character, intelligence, and ability.

But are children and teens really that impressionable?

While there hasn’t been a body of work that directly links sexualized images in ads and electronic media to problems in girls, individual studies strongly suggest that a link may be evident when it comes to media and eating disorders, low self-esteem and depression in girls. For example;

But here’s the real deal:

Be vigilant about the media that’s delivered through your mail slot. Be conscious about the messages that are conveyed in your living room. If you don’t like what you see:

Don’t buy it: Beyonce may make the clothes but you make the decisions. Only you can determine what comes through your doors from the mall and what goes out your door to school.

Shut it off: No; you can’t be with your child at all times but it’s important to supervise the media flow into your household. There are plenty of parental locks and internet blocks that can put your in control.

Talk about it: Let your child know your values and why you don’t think what the ads are portraying is a smart choice for her or your family.

Ask questions: You may be surprised by your child’s view of the media. They may be more savvy than you think. Ask what she thinks about what she’s seeing—be present—and listen.

Expose her to positive images: There are several positive role models in the media. However, don’t put all your eggs in one basket (we saw what happened with Miley and Jamie Lynn Spears). Open up your children’s world to actual living, breathing, 3-Dimentional role models in your community so that they can be inspired by something well beyond what they see on TV or in clothing ads.

Some decision-makers might be making fools of themselves by “pimping out” little girls in ads or draping a 15 year old tween queen in a sheet and sending it out to print, but you’re still the parent. Continue to instill values in your young children and they’ll be more likely to focus their attention away from these tween tarts and dolls gone wild and towards more appropriate activities; like playing dress up and watching Sesame Street.

If you want to read more on the opinions of Australian researchers and commentators, I recommend you read the many excellent and thought provoking submissions received by the recent Senate Inquiry into the Sexualisation of Children in the Contemporary Media Environment –

7 thoughts on “Too sexy, too soon”