Often companies that do the wrong thing are given lots of free publicity by virtue of the fact that activists  speak out in the media against the toxic products or services they are selling.

Whilst I recognise this is vital work, and certainly I am often called upon by the media to comment on companies who are exploitative, I sometimes wonder whether those getting it so very wrong (think those that pitch prosti-tot merchandise for tweens and those who run with slogans that sexualise and objectify women) might not actually relish the free publicity the ensuing consumer outrage sparks. There is no such thing as bad publicity, right?

This week, I want to also share the work of those who are doing the right thing and focus on some of the many positive things happening in girl world. Why is it we so rarely celebrate?

Kudos, then, to the new website aimed at female drivers: www.motherdriven.com.au. Not only are they uploading my blog posts to share, but they are also offering two free signed copies of my book The Butterfly Effect to members in a competition they are currently running. Better yet was Editor Olivia Richardson’s recent decision not to allow promotion on their site of clothing aimed at tweens that featured slogans like “Bad Girl” and “Rebel”. Olivia explained:

We don’t like to support brands that encourage teen girls/tweens to be “bad girls”, etc. Our web site is a toxic -free zone. We believe girls should not be encouraged to grow up too fast. 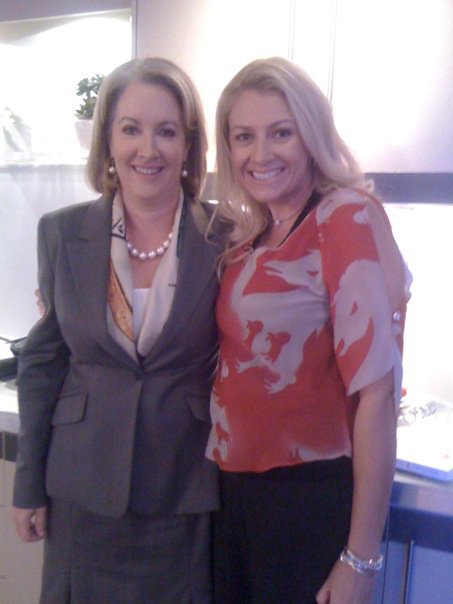 Bravo, too, to the organisers of the upcoming Insights 2010 National Conference on Girls’ Education to be held in Melbourne in June. They have attracted a stellar line-up of speakers, including one of my personal role models, Sex Discrimination Commissioner and Commissioner for Age Discrimination, Elizabeth Broderick (I am pictured here with her just before going on set at Mornings with Kerri-Anne earlier this week), Melinda Tankard Reist, Maggie Hamilton and Kaz Cooke amongst others. I am thrilled to be part of this and shall run a session for delegates on Friday, 18 June, as well as one for student participants, too.

Finally, I am just loving the NSW Department of Education’s free parent web-based magazine School Parents. A browse through old issues turned up some invaluable resources, including facts on tutors, tips on helping your child to successful change schools, advice on hosting teen parties, and interviews with various leaders in education and parenting. I was pleased to be interviewed alongside Dr Michael Carr-Gregg for this month’s issue on managing peer pressure. I thought it apt to reprint the article (with their permission) here:

Your daughter’s school friends are their closest confidants and their meanest critics. Experts on teen girl angst, Dannielle Miller and Michael Carr-Gregg, share their wisdom on taking the heat out of peer pressure.

Find out where your daughter gets her messages from

Girls place far more pressure on themselves than they receive from their peers, says Dannielle Miller, author of The Butterfly Effect. Their friends will comment on body image and shape, sexuality and whether she is perceived by the peer group as being beautiful. This adds to the “inner angst” a teenager may be dealing with, says Dannielle. “Peer-girl pressuring is a reflection of the pressure that’s placed on girls more broadly within society,” she says.

Girls are not only meant to be beautiful, popular, smart and successful, there is also pressure on them to act like “Paris Hilton-type wannabes”, she says.

Ask your daughter to think about the media and broader social influences and whether they’re the types of messages she really identifies with. Quite often you will find that they’re not.

Get involved in your daughter’s world

Knowing your daughter’s interests in popular culture can be a springboard to having a really great conversation, Dannielle says.

“If you go in straight away and say, ‘We’re going to have a big talk about how you manage peer pressure at school’, they’re going to switch off. But if you watch a movie with them like Mean Girls, which shows really good examples of that, they’ll want to have a chat about it afterwards to unpack it.”

Have an honest discussion with your daughter about how often her friends actually engage in risky behaviour, says psychologist Michael Carr-Gregg, author of The Princess Bitchface Syndrome and Girlfriend magazine’s agony uncle. Whether it’s binge drinking, smoking or sexual intercourse, a teenage girl’s ideas may be quite different to what’s really going on.

“Most readers of Girlfriend believe they are the absolute last virgin in their high school because all their friends are talking about their sexual experiences,” Michael says.

“Statistics show year after year that only about half of teens in Australian schools have sex by the time they have left high school. Daughters often feel indirect pressure from peers regarding having sex but much of what she is hearing is simply not true.

“Letting your teen know the truth about how often teens are avoiding these risky choices may let her know that she isn’t alone — something that she absolutely needs to hear.”

You are her greatest influence

“Parents need to know that they are one of the biggest influences on their daughters,” Michael says.

“It may seem like they aren’t listening, but they truly are. When parents stay involved in their daughters’ lives, tell them their views and values, they tend to make better choices for themselves. Many studies have backed this claim,” he says.

“Staying interested and involved in what your daughter is doing and continuing to be aware of what she is up to is crucial. Be consistent with your message about your expectations. If you expect that she will not drink, smoke, do drugs or have sex, she is less likely to do so – it’s as simple as that.”

Be straight about the no-go zones

If you suspect your daughter is taking part in illicit behaviour don’t mess around. Model assertiveness and boundary setting and be upfront, says Dannielle.

“Don’t shy away from those tough conversations if it’s something that is really non-negotiable.”

However, parents need to work out what is and what isn’t negotiable, she says. “If everything is going to be non-negotiable you are going to have conflict. You have to pick your battles. You might have to live with the messy bedroom if everything else is working alright, but with things like drinking alcohol and when it comes to her personal safety you have to let her know what is and isn’t okay,” she says.

“You can do it without belittling her but you need to be very strong and definite about your expectations.”

Seek advice from friends and experts

New parents don’t hesitate to seek advice on how to look after their newborn baby yet when our children reach adolescence we seem think we need to parent alone, Dannielle says.

“Parenting is this ongoing journey. A really important thing for parents who don’t feel comfortable and aren’t sure of how to advise their daughter is to find out what other parents are doing and how they’re dealing with this stuff and to brainstorm it,” she says.

“The other thing to realise is that it does takes a village to raise a child, so if there are some subjects that are just too touchy to raise with your daughter then perhaps an aunty, a neighbour, her favourite teacher or another family member could have a chat to her.”

Similarly, let her know that it is okay if she seeks guidance from other adults such as her year adviser or school counsellor if she would be more comfortable speaking to someone outside the family.

Be your daughter’s role model

“Quite often we like to talk the talk but we have to walk the walk,” says Dannielle. “Your daughter will pick up so much from how you manage yourself and how she sees you behaving and interacting, and similarly how you handle pressure.

“One of the key things that will make young people resilient to peer pressure and to toxic messages, whether they be in the playground or in broader society, is having a strong sense of who we are and what we value and that can be beautifully modelled by parents.”

Encourage your daughter to be assertive

Being assertive about what they believe in is critical, says Dannielle.

“We have to encourage them to speak their mind, not in an aggressive or confrontational way, and to not be afraid to set limits.”

When you see examples of your daughter being assertive praise and model it, she says.

“Show them how it looks. If they don’t see women in popular culture being assertive … then it’s going to be very difficult for them to emerge as a centred being who knows herself.”

Be aware of changes in behaviour

If your daughter becomes obsessed with dieting, the phone stops ringing or they begin spending too much time on the internet it may indicate that something’s not right in their world.

“Big dramatic changes in behaviour are always red flags that we need to be closely paying attention to,” Dannielle says.

“We know through research that a catalyst for eating disorders can be the peer group. A group of girls might decide that they all want to go on a diet together or lose a few kilos before the formal. Unfortunately, one girl will continue to get sucked up in that spiral.

“Similarly, if the phone just isn’t ringing for them anymore or if they seem to be online for an inordinate amount of time they might be caught up in a cyber conflict.

“These are indicators that you need to have a conversation and you need to be a bit more aware of what might be going on in her world.”

A phone call to her school to check that all is well there could also provide another source of support.

I’d love to hear what products and services you have found to be girl-friendly.

2 thoughts on “Things I am Loving”