I spend a lot of time alone.

I’ve been single for about five years now, and I often work by myself from home.

My children are teenagers and although we are very close, they are swept up in their own whirlwind of assignments and social gatherings.

Although it can, at times, feel lonely, I rarely feel as isolated as I have been when I’ve been in the wrong relationship. Feeling a disconnect with the person you’re supposed to be most connected with feels far heavier.

And there are things I have learnt to do to help lift the loneliness. I will take myself to see a movie, or go out for a meal.

Although I am still alone, being surrounded by others and hearing their chatter feels less isolating, and not at all as awkward as some might expect.

Sometimes, I’ll strike up a conversation with someone and make a new friend. I might read a book, or play on my phone (who said social media is making us feel more isolated? I love the instant connection to my tribe who may not be able to meet up in person, but will happily chat away with me online).

In fact, there have been times when I’ve looked around at the couples dining near me and been struck by how crushing their silence seems. Less the amicable quiet shared between companions, and more the loaded, simmering wordlessness of the estranged.

Besides, I’ve come to recognise that loneliness is just another feeling. Like joy or sadness, for me it passes.

Yet for others, loneliness can lead to feelings of shame and desolation.

We know social isolation is strongly linked with depression, suicide, drug and alcohol use, and violence. Janet Morrison, from the UK’s Campaign to End Loneliness, believes loneliness is a health risk we don’t take nearly seriously enough, “ … it has the equivalent impact as smoking 15 cigarettes a day and is as big a risk as obesity”.

We have spent millions on campaigns aimed to deter children from smoking, and to be more physically active. However, our solution to giving young people the skills they need to respond with resilience to loneliness seems to be to convince them they should never experience this emotion.

“You must have more than one child to prevent your poor offspring feeling alone!” relatives will advise. “No child should ever have to sit by themselves!” well-meaning folk will decree.

None of us should be expected to cope with being ostracised, or with being socially isolated for long periods of time; humans are wired for connection.

But if our little darlings have the odd day when they feel lonely? Rather than panic on their behalf and rush to call their school to demand to know what they are going to do about this, perhaps we should instead encourage our kids to find out what makes them feel better in these moments.

Could they go to the library and escape into a book? Could they do their homework and then enjoy taking the night off? Perhaps they could go and practise shooting hoops on the basketball court (an activity bound to attract at least one other child wanting to throw too). Could they tell some classmates who seem nice that they’re feeling alone, and ask to join them (despite the popular belief that the schoolyard is dominated by bullies, most kids are actually kind and accepting).

And we can show our children too that we don’t always have to have a plus one to enjoy ourselves either.

Rather than lamenting the fact that none of our loved ones want to go and see a show we are interested in with us, we could go off merrily to have our own “me party” and chat about how much we enjoyed the experience afterwards.

Learning to be content in your own company is a vital life skill.

Let’s not deprive our kids from the opportunity to develop it.

It might just save them from rushing into the wrong relationships later in life simply to avoid flying solo. 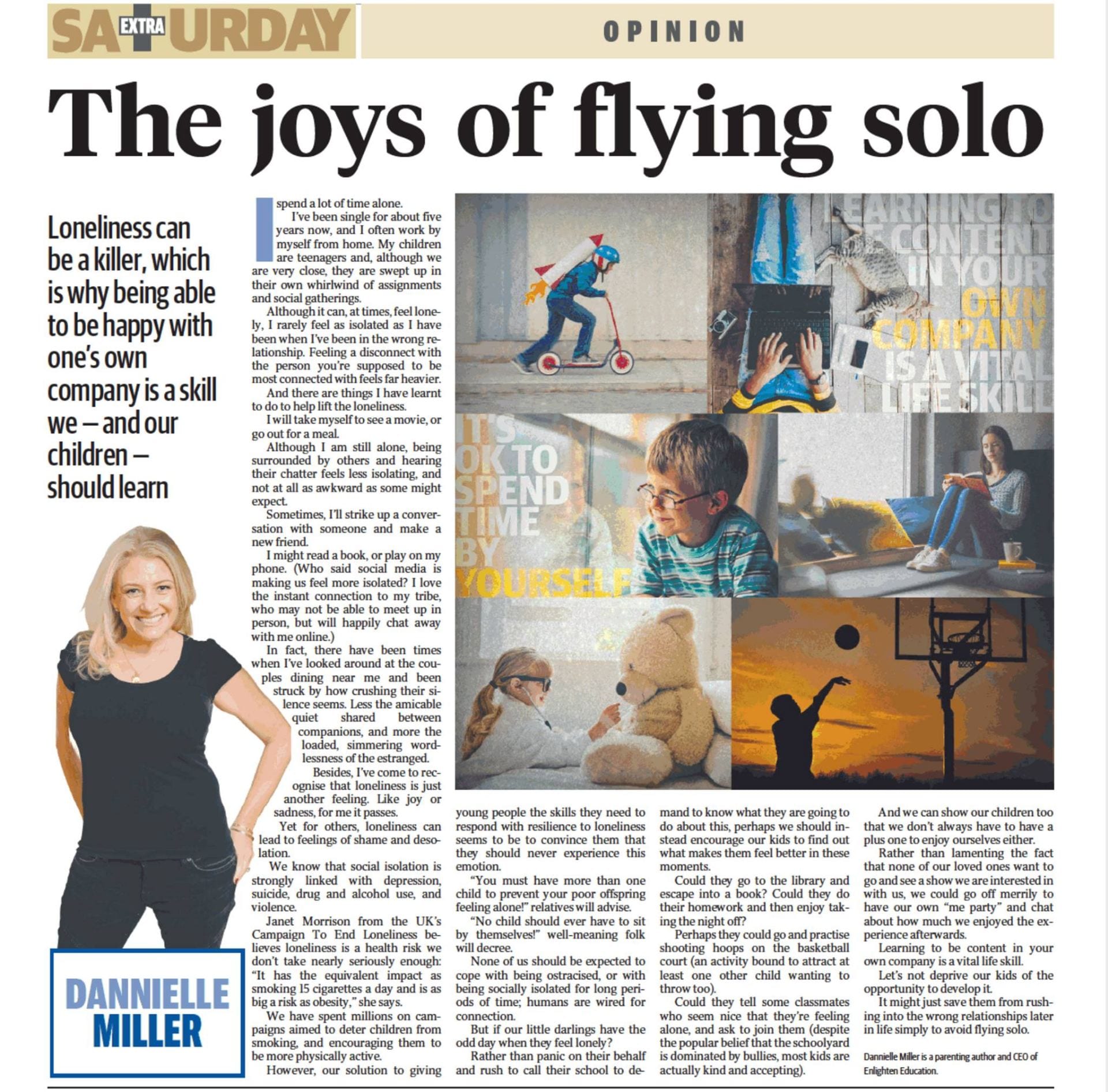