You may recall me sharing my outrage with you over sports commentator Caroline Wilson’s treatment on the Footy Show. The charming Sam Newman decided to dress up a mannequin in skimpy lingerie, staple her picture to its head and thrust it’s crutch into the face of his fellow co-presenters. By all accounts – this was deeply offensive.

Even more offensive – Sam responded to the ensuing outrage by saying that women who complained were “liars and hypocrites”.

The fallout has been really interesting to observe. And it is not just women who are complaining. In a move that media commentators say is virtually unprecedented, the ANZ bank has directed its advertising away from the show. The Age newspaper has also redirected advertising from the show to other Nine programs after Newman attacked the newspaper and its journalists. Women’s Forum Australia is considering requesting more companies boycott the program. Director Melinda Tankard Reist (a regular Butterfly Effect contributor) has made WFA’s stand crystal clear:  “The program has caused a great deal of hurt to a lot of women and if The Footy Show can’t respond in a proper manner, then maybe they will respond when they start losing money.”

I was particularly taken with writer Catherine Deveny’s assessment of the incident in the Herald on the 21st May. I have attached the link to the full article but really it is just so powerful that I feel compelled to quote from it extensively here:

I’ve seen Wilson take the lads on. She’s quick and outspoken. So what took her so long to write about her treatment in Mannequingate?…

I’ve often been confronted by jarring or offensive behaviour and chewed it over silently for a while before realising that I’ve been put off my own instinct by an invisible electric fence in my head.

I hold my tongue while grilling myself — “Am I overreacting? Am I being uptight? What will they think of me if I say something?” — before concluding “No, you’re right. That’s wrong. Speak up.”

By the time I’ve got past the invisible electric fences, it’s often too late.

When the blokes encourage you to play the dignified silence card, that’s code for “pipe down, girly, or we’ll demonise you”. Then you won’t be able to do the job you so obviously love and you’ll end up the loser. There’s always an implication that they’re doing us a favour, letting us play with the boys.

Look what the media does to Cherie Blair, Germaine Greer and Hillary Clinton. Any opportunity newspapers have they run the worst possible photograph of them. One that makes them look mean, ugly and hysterical. Punishment for speaking up and refusing to stay within the fences…

If a bloke had been the victim of such premeditated humiliation, the advice would have been “sue the pants off the bastard, Stevo. You don’t have to take that. Stand up to him. What do you mean ‘dignified silence’? Where are your balls? You can’t let him treat you like that. Shirtfront the bastard. And call a lawyer.”

Ignoring iniquity and injustice doesn’t work. The mere presence of pigs in suits reinforces and vindicates other pigs and lowers the expectation of all male behaviour. Letting it go normalises the whole thing and establishes some kind of precedent along the lines of “these things happen. And they blow over. Boys will be boys.” No. Pigs will be pigs. And it needs to stop.

It’s not good enough to be sorry about this kind of debauched behaviour after the fact. We have to stop it happening, and not just in the media. In workplaces, schools, social situations and under our own roofs.

And within our own invisible electric fences.” 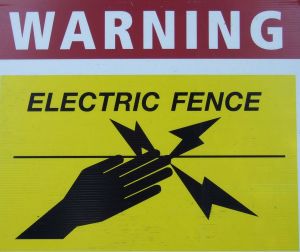 How very true! Yes – this type of blatant misogyny must stop. And yes – we do have to step up and break through our own electric fences. Our girls needs to see what  strong, confident, assertive woman look like. They need to see how we set boundaries, and how we demand to be treated both within the home and by society itself. If we won’t show them, who will?

News flash! With the upgrades made to Edublog over the weekend, I can now upload the audio of an interview I did last month with Prue McSween on girls and bullying. Enjoy!