Just when you thought you’d seen every possible way for marketers to pressure girls to be too sexy too soon, along comes another opportunity for stores to sell product and sexualise girls . . . Halloween! Though we may not have grown up with Halloween as a tradition, trick-or-treating is entering our culture in a big way.

For my daughter, Teyah, and son, Kye, 11 and 8, any celebration that involves dressing up and lollies is bound to be popular, so I took them to a Halloween store at The Supa Centre (Home Hub), in Castle Hill, to pick out a couple of costumes. I’ve always known the centre as a whole to be a fine place to take the kids.

So just how did this casual little school holiday outing to a suburban shopping centre end up with me appalled beyond belief, racking my brain for a response to a perplexed 8-year-old’s question about bestiality and hightailing it out of the store just before security came to escort me out? I went on Mornings with Kerri-anne to tell the story. (Note, when I say “homemaker centre” in this video, I’m using the term generically. The place I’m talking about is called The Supa Centre but is listed on-line as Home Hub Hills.)

The little girls’ Halloween costumes were stomach-churning examples of sexualising kids at too young an age. This one is available in sizes to fit girls aged from 3 to 10: 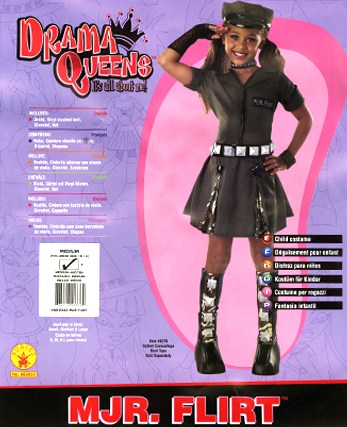 When Halloween becomes an opportunity to sexualise little girls, we’ve crossed a line. Girls aged 3 to 10 should never be dressed up as major flirts. Full stop.

And what do little girls have to look forward to when they grow up? Those ubiquitous bunny ears, of course: 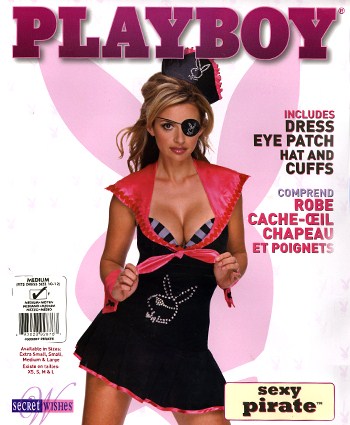 If I sound like some kind of prude, let me just say that I don’t have an issue with women dressing up in a sexy way if they want to. And I totally get it that Halloween is one night of the year when people might want to express their wilder side.

What I object to is that, yet again, women are boxed into a narrow view of what “sexy” is. We shouldn’t be allowing Playboy (or any other brand) to define what “sexy” means. Not all of us feel at our sexiest or most feminine stuffed into a tight corset and fishnets. Real female sexuality is more interesting and diverse than the big-breasted, long-legged Playboy stereotype!

What I object to is that yet again women and girls are being made to believe that their true currency is their body and the best they can aspire to is to be sexy. Standing in that store was exactly like this cartoon by Andy Marlette, which sums it up perfectly. Boys can be superheroes, literary characters and martial arts experts. Girls can be . . . sexy.

Reproduced with thanks to Andy Marlette

What I object to is that there is simply too much blurring of the line between adulthood and childhood. Girls aged 3 to 10  have sexualised soldier and sailor outfits. Women and teen girls have sexualized Sesame Street costumes, like these I saw on Feministing:

The line between childhood and adulthood is often further blurred by retailers who place adult products at children’s eye level — think FHM near the chocolate bars at the checkout. The Halloween store I visited at Castle Hill seemed to be mainly aimed at kids, and I counted 11 children under the age of 10. Yet the adult costumes were mixed in with the children’s ones. Playboy was in amongst Star Wars. But even worse than that, there were some deeply offensive costumes for men openly on display for kids to see. They were too graphic to show on Kerri-anne or to show here. One costume had a fake sheep attached to the groin area. Another had a blow-up doll dressed in a G-string attached to the crotch so that it would appear that she was giving the man oral sex.

I was angry that my children were exposed to this. My son actually asked me “What’s that man doing to the sheep, Mummy?”

But I was polite when I went and asked the manager why this merchandise was on display for kids to see. I think my question was a very reasonable one, but I was asked to leave the store.

When Home Hub Hills’ management rented space to this retailer, I’m sure they assumed they would be selling the usual witch’s brooms and scary masks and lollies. I want to stress that in the past I’d always had good experiences at this shopping centre with my family. This weekend, the centre held a Cat in the Hat Family Fun Day and I can’t imagine that the management would be okay with kids visiting the centre possibly being exposed to depictions of bestiality and oral sex.

If a shopping centre’s management receives enough complaints about a retailer, it may affect their decisions about whom to lease shop space to in the future.  So if you’re as concerned as I am about protecting children from adult content, please join me in contacting Home Hub Hills’ management. Ask them to do whatever they can to prevent retailers from displaying inappropriate adult merchandise where children can see it. Here are the contact details from their website:

12 thoughts on “The real Halloween horror: it’s just another excuse to sex girls up too soon”