This post was first published in The Daily Telegraph, December 26th, 2014.

Educator, author, media commentator, cause for great concern. It seems at various stages in my career I’ve been all of the above.

Last year I received a call from the management team of a company who had booked me as the keynote speaker at an education conference. They were nervous as apparently another prominent figure working with youth had called them questioning my suitability to speak at this event. My crime?  The fact that I had once posted a picture of my daughter on my Facebook page in her school uniform (something the other professional deemed dangerous and irresponsible).

Whilst publicly posting images that allows our children to be too easily identified is certainly not advisable, I had to giggle to myself at how misguided the concern was for it is this anecdote; me explaining why I had done this (“Look! My big girl’s first day of high school!”) and then retelling why I subsequently took it down the next day (“Bugger! Probably not that safe…”) that parents and educators I talk with relate to best. After all, what can be more comforting than hearing that the so-called “expert” got it wrong too?

And let’s just clear the air once and for all. I’ve made plenty of mistakes. Screaming at kids when frazzled? Check. Failing to hand in school notes on time? Yep. Serving up beans on toast (with a side order of exhaustion) at dinner? Guilty; truth be told? I’m actually a repeat offender.

In fact, I am always amused when I am described in the media as a parenting “expert” as the title assumes a level of perfectionism I simply don’t have – nor want. Sure I have formal expertise and qualifications but I think of myself as more an avid explorer. I am intrigued and delighted by young people, and keen to work with them and listen to them. I also love learning from others who devote themselves to education and nurturing. I then relish working out how to best report back my findings. More tour guide than know-it-all.

The other types? The dictatorial parenting experts?  Well they’ve been responsible for some really dodgy advice over the years. Everything from rubbing alcohol on teething babies gums, to letting unattended babies cry it out indefinitely, to using the rod to discipline, thus avoiding spoiling the child (a common theme seems to be we should raise quiet and compliant kids).  But worse still, I think they’ve disempowered many parents who feel that perhaps it is in fact all too hard and that they really aren’t capable of raising their own children to be happy, healthy adults.

As I walk into my home painted in huge letters at the entrance is a quote that helps put things in perspective for me. It is from Julian of Norwich in the late 15th Century, “All shall be well, and all shall be well, and all manner of things shall be well.” These words, considered to be the first on record written in English by a woman, speak of hope and compassion. At the time in which they were written, however, they were considered heretical. Julian was speaking of a God who she saw as being forgiving and loving. The Church back then was all about prescriptive rules; do it this way or be doomed!

Whilst I am not particularly religious I have always found Julian’s message comforting.

And all was indeed well. I did speak at that particular conference. And I shared what I do that works, and was honest about what I could do better.

My favourite piece of feedback from the day? “Parenting teens is not rocket science is it? You reminded me that I’ve got this.”

Yep. You have. This doesn’t mean you should ignore the wisdom of those with years of research and experience under their belt who speak with common sense and a genuine affection for children and families. Rather, it means you should tune in to those who also make you make you feel empowered and hopeful. Know too that although your child may occasionally stuff up (as may you) it will be ok.

Love, laugh, listen, learn, forgive.  And know that in this expert’s opinion? There is much beauty in imperfection. 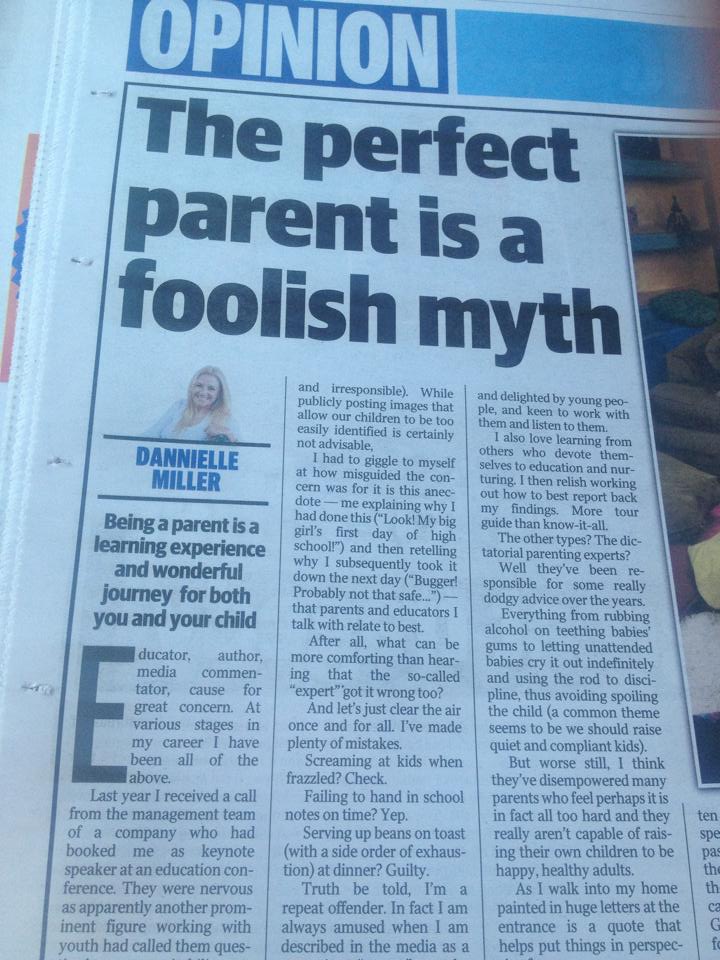