Various newspaper articles have reported that the Head of Warner studios, Jeff Robinov, recently declared that; “We are no longer doing movies with women in the lead.” It is alleged that his studio believes that female stars cannot guarantee top box office returns. No surprise that Warner Bros is now denying this report. Best this type of talk is kept for behind studio doors.

The edict was uncovered, however, by journalist Nikki Finke, who posted it on Deadline Hollywood, her website devoted to movies, as distinct from celebrity business, on October 5. Despite Warner Bros denial, she stands firm.

If women cannot guarantee “big bucks”, should we then become invisible? And if women are no longer given lead roles, what implications will this have for the way girls and women are depicted in film? Surely they will be dire!

There’s no question the amount of product for women has diminished. Every year it’s a little less. The major studios only want to do the sure thing. Of course, these are decisions being made by men, who have a certain language for some of their films. The movies aimed at teenage and even grown-up girls are called chick flicks. The majority of the rest, filled with explosions of cars, buildings and bodies, with enough bare female flesh to satisfy the lowest common denominator, are aimed at teenage boys, the ones who reliably go to the cinema on Friday nights. Those films are called dick flicks. Of all the major studios, only one, Sony, is run by a woman Amy Pascal.” ( Say Goodbye to Hollywood Baby, Oct 15, 2007).

One cannot help but wonder if the reason why films starring women leads are not bringing in top dollars is because many are just so damn inane!  It is rare to see strong female leads in film nowadays, unless it happens to be a period piece ( surely this is ironic given women are meant to be more liberated now than ever before – wouldn’t it be reasonable to expect we would have more diverse experiences and more interesting things to say and do NOW?).

Hylda Queally, an agent at the William Morris Agency who represents Kate Winslet, Cate Blanchett and Hilary Swank, among others, has made comment on the lack of meaty roles for women in film;  “If you don’t want to play the stereotypical wife, girlfriend, lover – a corpse, basically – it’s hard. You see a lot of actresses gravitating to period movies, which are better written and have fully fledged characters.”(As reported by Sharon Waxman, “Fade to Black – Women’s Role in the Movies”, International Tribune, 2001). 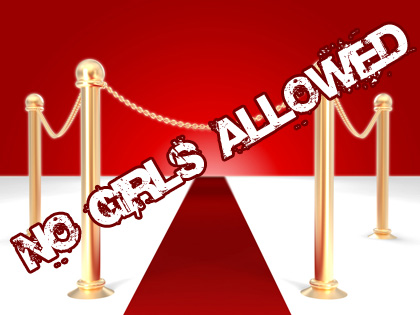 I suspect part of this trend towards patronising “chick flicks” and uninspiring films with female leads that do not fare well at the box office may be due to popular culture’s narrow definition of beauty and intolerance of the ageing process. If films choose to only explore the lives of traditionally beautiful women under 30, they will be less likely to have the scope to explore the more complex lives that other females, including those who are older and have had more rich life experiences to share, might offer.

Frustratingly, the trend towards resorting to radical plastic surgery in order to make older women look more acceptable in film is turning them all into bland, expressionless aliens. Nothing has distracted me more in a film than seeing Jane Fonda’s terrible face lift in the recent film I saw on DVD “Georgia Rule.” As if the sight of the once interesting Jane Fonda looking pained was not bad enough, star Lindsey Lohan looked dangerously thin and was an ugly, cliched version of a Troubled Teen (all sex and attitude). Lohan’s character actually says to a shy young cowboy she has just met, when he tells her he must go as he has to ride his horses, “You won’t have to brush or feed me after riding me.” In fairness to the film, it may have improved but that was 20 minutes in and enough for me. Who writes these lines?!

If this is the type of film Hollywood thinks women, and teen girls, will be drawn to – no wonder we are not buying tickets. I don’t blame the actresses but rather the idiots who decided a character who was after all a Grandmother had to be wrinkle free, and that a sad teen had to be, above all else, HOT, HOT, HOT and THIN, THIN, THIN.

Howard Cohen, the President of independent film company Roadside Attractions, has publicly supported Robinov – to a point – “On a statistical level, he’s right. If you put an equal number of men and women in equivalent movies, the men would carry the day because they’ve been developed as action stars, thrillers, comics. No one develops a James Bond franchise with women. There’s no money put in women stars in other genres, so it’s a self-fulfilling prophecy that they can’t carry a big movie.”

Although after watching the clip with Sean Connnery and Barbara Walters below – and brace yourself, it is a shocker -one must wonder whether all that testosterone / action is so wonderful. And if the world needs more Bonds like this one! “Dick flicks” may bring in the bucks but just what are they doing to our boys’ brains?!

May I suggest studios don’t give up on the girls, but rather start asking what interesting projects they can develop for their leading ladies that will appeal.

3 thoughts on “The Invisible Woman – Coming soon to a cinema near you!”