Mid-November marks the beginning of the high school formals; a time that is less a celebration, and more a season of discontent.

Because along with all the spray tans, fancy frocks and stretch limos comes a swag of advice for girls that ranges from well intentioned but misguided, to outright dangerous.

What’s the one question that sends many a single girl into a panic? “Who are you taking to the formal?”

It’s 2018. Surely we’ve moved beyond pressuring young women to find an attractive man-bag to hang off their arms.

When I supervised formals back in my teaching days, I always felt sorry for the poor lads who had been dragged out for these events, and were then all but ignored once they had performed their obligatory photo duties. I felt sorry too for the girls I knew would look back at pictures from the night and cringe when they saw who they went with just because they felt pressured to pair up.

Let’s encourage more solo operators. As sassy singles, our daughters will be able to enjoy the company of their schoolmates and celebrate all their in-jokes together one last time (which is, after all, what an end-of-school formal is supposed to be about).

In the lead-up to formal, a girl’s list of what she needs for the big night can become the teen equivalent of a bridezilla’s: the right designer dress (actually, two dresses, one for the formal, another for the after-party), jewellery, handbag and shoes, professional hair and make-up, tanning, waxing, and sufficiently glamorous transport to get them there. The total cost is generally well over a thousand dollars.

At one high school, a girl bragged to me that her mother had flown her to Paris to buy her formal dress. I was speechless when, in the next breath, she revealed that there was a down side: as it was a Parisian label, only diehard fashionistas would know the designer, so she would have to explain to the other girls how prestigious her dress was (surely the very definition of a first world problem).

But it’s not just the finances that take a hit. For many girls, the angst over what to wear not only drives them to scrutinise their bodies, but seems to provide an open invitation for others to critique them as well.

I recently heard of a school that had teachers run a seminar for their girls on which colours might best suit them, and on which styles would prove most flattering.

Yet much of the information presented actually focused on how the girls should cover their flaws.

One teen girl who swims competitively was told her shoulders would need to be disguised (she hadn’t been aware her strong arms were considered unattractive until this was pointed out in front of her peers).

Another was told that despite being larger, she could still achieve an hourglass figure with the right garment choices.

We mustn’t spend six years telling our girls they should never be defined by their looks, only to encourage them to conform to narrow standards of beauty once they reach the finish line.

The lead up to formal season is peak dieting time for teen girls with many going to extreme measures to lose weight rapidly, including starving themselves, purging and using laxatives.

Jade, 19, says her battle with anorexia began after she made the decision to drop a dress size for her formal: “But on the night of the event, I’d lost so much weight that my dress just hung off me. I spent the night anxious, scared and hungry. And I stayed that way for years afterwards.”

Let’s not ruin this milestone in our girls lives by offering them anything other than words of affirmation — and the tools they need to critique marketing messages and beauty myths that don’t serve them.

It is a big night; yet only one of the many they’ll have in their diverse, sparkling lives. 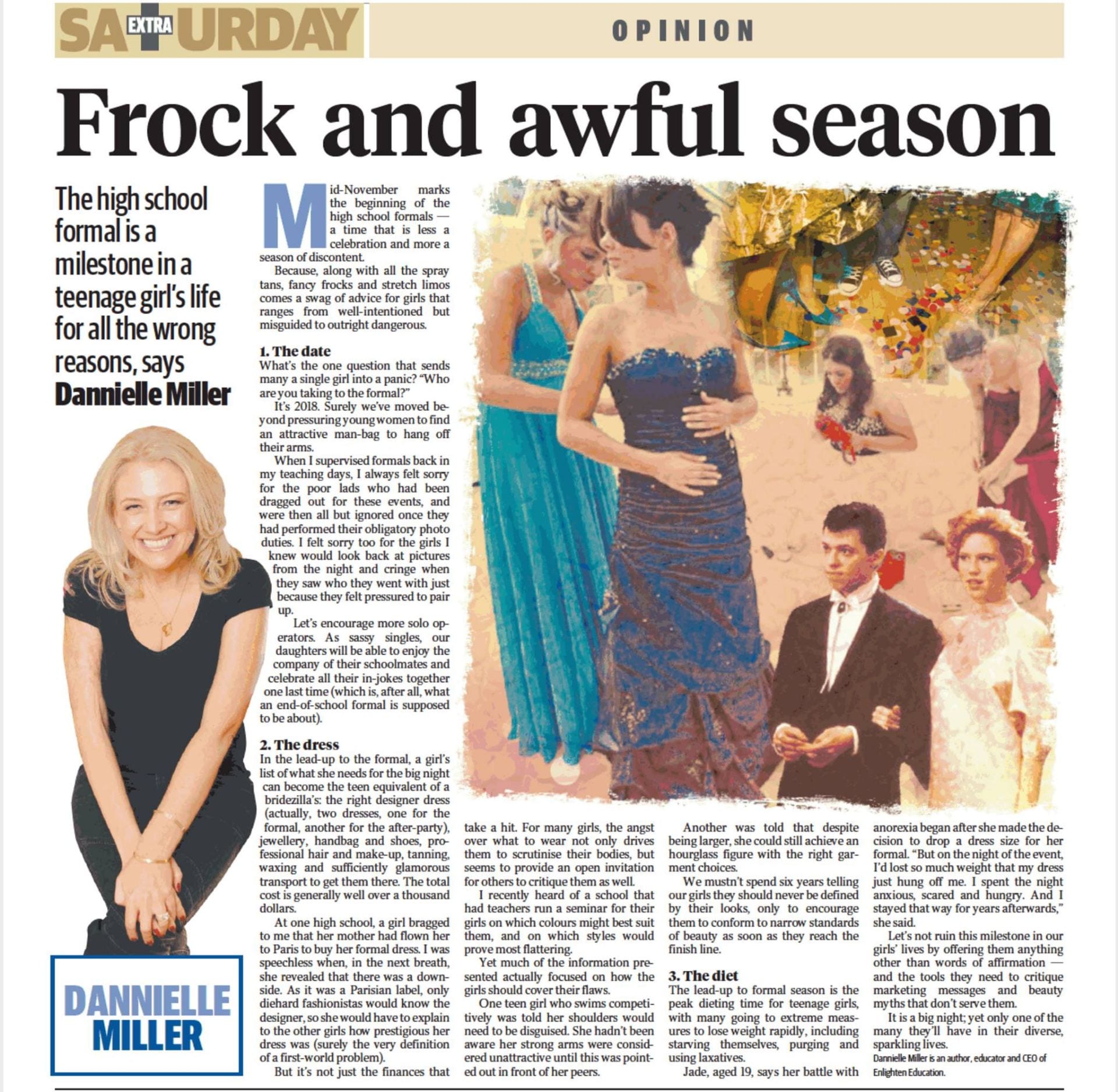