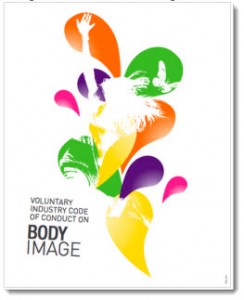 Late last year in this blog, I gave my assessment of the National Strategy on Body Image proposed by an advisory group that was appointed by the federal government. Kate Ellis, the Minister for Youth, has just released the government’s body image policy in response to the proposal. So, how has the policy shaped up?

I had praised the advisory group’s recommendations for a Body Image Friendly Schools Checklist, so I am happy to see that the government will be distributing posters based on the checklist to every primary and secondary school in the country.

Regarding the rest of the policy, I think the intentions are good and many of the principles are undeniably sensible. Stores stocking a broad range of clothing for all shapes and sizes? Of course I believe in this recommendation, and many similar recommendations. However, I also believe that girls and young women deserve stronger action than what this policy takes.

The government has introduced an industry code of conduct designed to encourage the media, fashion and advertising industries to promote more positive body image messages. I agree with most of the guidelines in the code, such as calling on companies to: promote positive body image messages; include images of a range of body shapes, sizes and ethnicities; not undermine positive body image editorial messages with negative advertising; use models who are of a healthy weight and appropriate age; and cater to diverse women. One aspect of the code I am suspect of is that it asks companies to not digitally alter images to an unrealistic or unattainable degree, and to tell consumers when they have altered images. Frankly, this recommendation seems inadequate. Doesn’t any Photoshopping send the message that women are not good enough the way they are? That aside, in large part, I think it will be a healthier world for our girls to grow up in if companies follow the code of conduct. But—and this is a big but—the code is only voluntary.

This seems profoundly naive to me. What media, fashion or advertising company is going to invest time and money in following a voluntary code—unless it’s good for their bottom line?

This brings me to my next reservation about the new policy . . .

A national body image friendly awards scheme is to be launched. Organisations, initiatives and products that receive awards will earn the right to display a body image friendly symbol. It’s like the body image equivalent of the Heart Foundation’s tick of approval. But surely companies will only vie to win an award if it helps their bottom line. Are we seeing the start of the commodification of positive body image? That’s a possibility that truly makes me shudder.

Already we have seen companies such as Unilever using the body image issue to sell products, through their Dove “real” beauty campaigns. Given that Uniliver employs incredibly negative body image messages to sell some of its other brands, such as Lynx, Slim Fast and Ponds Skin whitening cream in Asia, I think it’s fair to conclude that at least in that company, profit is more important than positive body image. (There has also been some questioning of just how real the images in those Dove campaigns are. If you want to find out more, there are articles in New York magazine and Jezebel about a hypocritical casting call for “beautiful” and “flawless” women for their next real beauty campaign. Dove has since put out a statement that they didn’t approve the casting call—though I notice that they haven’t denied an association with the casting company that issued it.)

My main concern is that a body image friendly symbol could become just another marketing tool to drive profit—and one that may well be fairly meaningless to the consumer if it doesn’t reflect the whole reality of a company’s body image messages.

Last year, I noted that the proposed national strategy had nothing to say on the sexualisation and objectification of women and girls. The government’s policy also fails to address these crucial issues, even though the pressure to be too sexy too soon is a major part of many girls’ body image dissatisfaction. Experts in child and adolescent development, parents and social commentators have identified the damaging rise in sexualisation and objectification as something we as a society need to act on now.  The Australian Psychological Society has issued guidelines and has lobbied extensively in Canberra. So, why the deafening silence in the government policy?

Melinda Tankard Reist has written a couple of thought-provoking blog posts on this gap in the policy. Among other things, she discussed the absurdity of the media touting the size 14 model Laura Wells as the ultimate in positive body image simply because she is not thin and is happy to pose almost nude, squeezing her breasts together for the camera. I agree wholeheartedly with what Melinda wrote in a follow-up post:

You can have a range of body shapes, sizes and ethnicities represented, but they can still be posed and styled in sexually objectifying ways. Objectification in a size 14 is still objectification.

Associate Professor Karen Brooks, of Southern Cross University, in her column in The Courier-Mail, like me agreed in principle with the aims of the policy but had reservations. She believes, as do I, that it is unfortunate that the advisory group did not seek opinions from a greater number of outside bodies and individuals with expertise in these issues. Karen also notes that the government’s allocation of funding has opened the way for beauty industry involvement in the teaching of positive body image in schools. I think such involvement is a whole world of wrong, akin to a fast food chain going into schools to promote healthy eating. That’s why Enlighten Education will always remain proudly independent, never accepting sponsorships or partnerships with corporations of any kind, especially beauty and fashion companies.

I also share Karen’s view that it is key for any in-school body image initiatives to be targeted at large groups of girls, over a sustained period. This is something that Enlighten believes in very strongly, because evidence shows that large-group interventions—say, with an entire grade—are far more effective than small-group ones of only a dozen or so girls. It is critical to spread the message to as large a number of girls at once as possible. That way, a girl’s whole peer group is speaking the same language, so the message isn’t undermined.

Over the next few months, the criteria for earning the government’s body image friendly symbol will be fine-tuned. I join with Karen Brooks in urging the advisory group to use this time to consult more widely with experts and with young people. I applaud the government for its good intentions and for acknowledging that negative body image among young people is a real issue that we all need to be concerned about. However, given the policy’s limitations, I again urge parents, teachers and community leaders to keep up the good work of combatting negative body image messages. In the end, it is our responsibility to be body image role models for girls and to send positive body image messages in what we say and what we do.