Long after we have swept away the aftermath of the countdown to a new year (the empty bottles and trampled party streamers) something shiny and marvellous will still remain. The promise of a fresh start.

And I’m not alone in embracing the possibility of change; about 40 per cent of us will have made a New Year’s resolution.

Tellingly, in our looks-obsessed culture, most of these pledges will relate to a desire to lose weight.

Not because we necessarily want to be more energetic or healthier, but rather because we’ve bought into the diet industry’s seductive promise that along with our new body will come a new, more joyful life; “If I just looked like that, then I’d finally find a partner”, “I’ll be happy once I reach my goal weight”. Skinny is fine, but it doesn’t guarantee you contentment or love. Forget carb counting and body fat index ratios. It seems to me there are more important resolutions we need to make (and keep) if we are serious about the passionate pursuit of happiness.

If 2017 has taught us anything, then surely it is that despite all the political doublespeak and accusations of fake news (a phrase that is reported to have risen in usage by 365 per cent since 2016) we still believe that truth matters. The #metoo movement also taught us that the truth almost always eventually surfaces — and cleanses.

Writer Rayya Elias has a mantra worth adopting: “…When everything else in the room has blown up or dissolved away, the only thing left standing will always be the truth. Since that’s where you’re gonna end up anyway, you might as well just start there.”

Sure the truth can be complicated, but owning it tends to ultimately simplify things.

In recent years there has been increased interest in the field of positive psychology, a discipline that looks beyond the treatment of psychological problems and focuses on helping people to actively thrive. Essentially, it’s the science of how to have a more positive outlook on life.

And when it comes to the research on what drives happiness and a healthy mental attitude, the standout is gratitude.

Daily doses of gratitude work best to flex the thankfulness muscle — whether it be through keeping a gratitude journal, writing letters or cards of thanks, giving to the less fortunate, or by volunteering to do acts of service to the community. Thankfulness is also the antidote to perfectionism.

When we develop deep gratitude, we know that we are enough (with, or without, the extra five kilos) and that we have enough (regardless of what gifts we may, or may not, have received at Christmas).

We know social isolation is strongly linked with depression, suicide, drug and alcohol use, and violence. Janet Morrison, from the UK’s Campaign to End Loneliness, believes loneliness is a health risk we don’t take nearly seriously enough, “ … it has the equivalent impact as smoking 15 cigarettes a day and is as big a risk as obesity”.

Yet despite the numerous online connections we make, research has shown that one out of four of us feel we have no real friends. And it is adults who are most at risk of friendlessness.

Culturally, we are encouraged to seek out someone we are romantically interested in and pursue them.

We are also trained to fine tune our skills at attracting a lover — there are dating guides and workshops, even reality shows that share every moment of the journey towards love for us all to dissect. Yet we don’t often discuss how to woo a potential new friend.

Sure we can learn conversation skills, and get involved in clubs or volunteer in the hope we might connect with those who are like-minded. But we also need to be prepared to make an effort.

Rekindling old friendships, and igniting new ones, shouldn’t be put on the bottom of the 2018 to-do list.

Last year on New Year’s Eve I gathered with a small group of close friends to share dinner and engage in a forgiveness ritual; we wrote lists of things we forgave others (and ourselves) for in the year that had past, and then burned these to represent letting go of these hurts.

Rather than being a solemn ceremony, there was much laughter and a focus on the future.

Rituals can be powerful tools for developing bonds, building mindfulness, and providing meaning in a world that can all too often feel chaotic. On New Year’s Day I’ll resolve, as I have for the past few years, to take small, determined steps towards authenticity, thankfulness, deeper relationships and releasing hurts. Some years, I have more success on this journey than in others.

But there will be magic in beginning — again.

This story was first published by The Daily Telegraph, 1/1/18 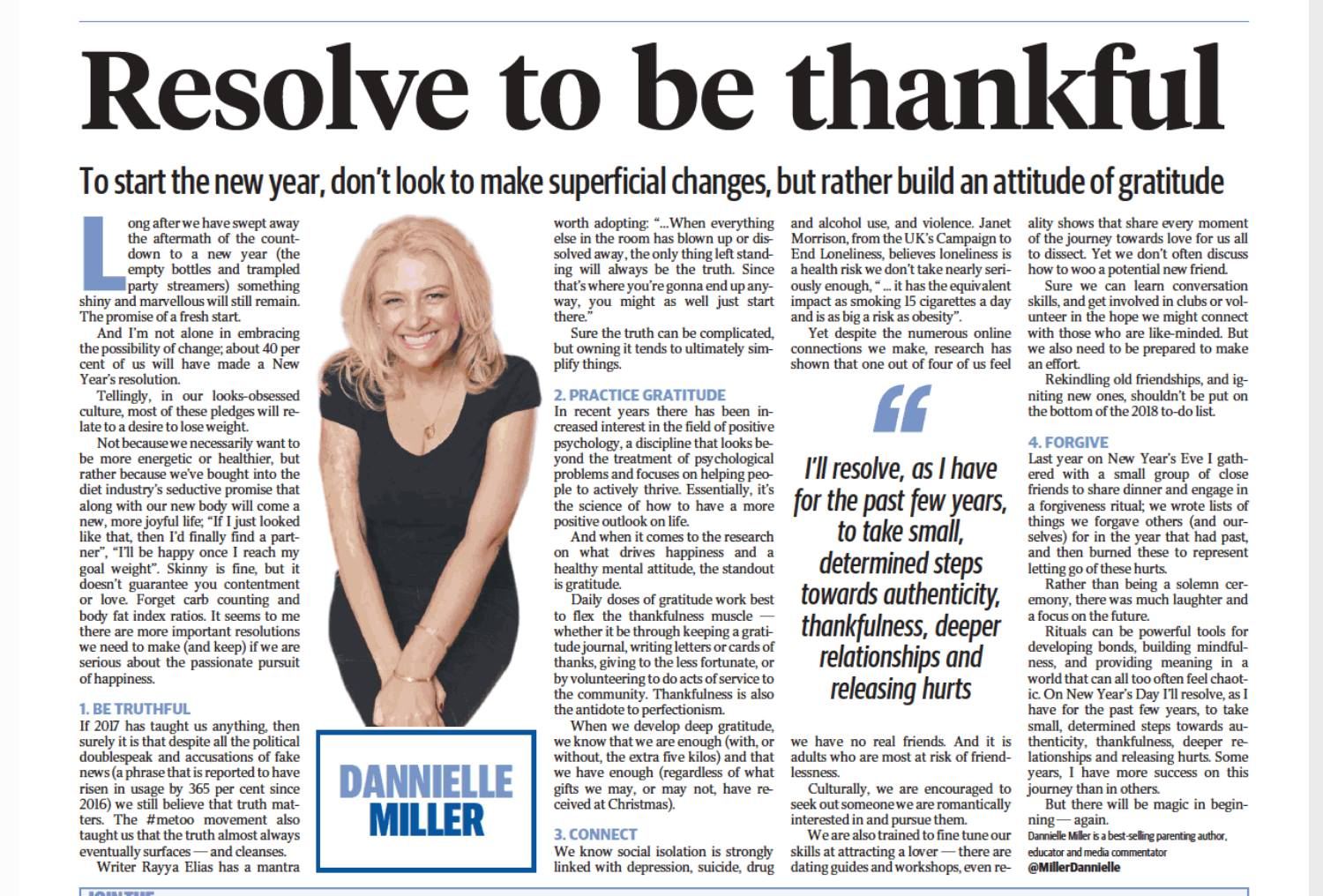