This week I have noticed an alarming trend on Facebook. Many of my teen girl “Friends” have been liking sites that make jokes about “sluts”. I don’t want to give these sites anymore oxygen here but there does seem to be a fresh wave of pages dedicated to this. I became so concerned I immediately sent out a message via our Enlighten Education FB page:

Amazons – here is the deal. I am friends with loads of teens and I notice many are “liking” sites that refer to girls as sluts or make jokes about sluts. Man – this makes me sad! There is NO excuse ever to call another woman a slut or make assumptions about her sexuality. By joking like this, and labelling, we give others permission to do the same…Love, Light and Laughter , Danni xxxx

I was reassured when within the space of 20 minutes, at least 45 girls had agreed with me and a number said they were sharing this as their status too. 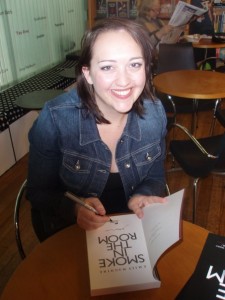 I thought it timely too to publish a guest post by one of my favourite young Australian feminist writers, Emily Maguire which further explores the dangers in defining women, and teen girls, by their outfits.

Emily is the author of three novels and two non-fiction books. Her articles and essays have been published widely including in The Monthly, The Australian and The Age and in 2007 she received an Edna Ryan Award (Media Category) for her writing on women’s issues. Emily was named as a 2010 Sydney Morning Herald Young Novelist of the Year and is the recipient of the 2011 NSW Writers’ Fellowship. Her latest book is “Your Skirt’s Too Short: Sex, Power, Choice.” I am thrilled to share an extract from “Your Skirt’s Too Short” and hope it will illicit debate and discussion. I’d also like to add another argument here in defence of teen girls; whilst we are often quick to judge, we forget it is the culture that surrounds them (which is largely adult created) which tells them at every turn that their currency is their looks, and their capacity to be sexy. How can we condemn girls wearing short skirts when we have brought them Bratz dolls dressed in exactly the same attire since they were toddlers? Why wouldn’t a young woman want to dress like the role models popular culture presents her with? And if we are so quick to judge, why are we not surprised when they judge each other so harshly too?

Let’s not allow ourselves to get caught up in the blame and shame game, nor turn a blind eye when we see teens engaging in versions of it that are masked as being merely for LOL’s.

The meaning of a miniskirt

A good friend of mine was told by a senior co-worker that she should ‘rethink her clothing’. She asked for clarification. ‘You tend to dress like a slut,’ she was told. Note the accusation was not that she was a slut, but that she dressed like one.

If we agree that the term slut means to have more sexual partners than the user of the term finds acceptable, what does it mean to dress like one? Amongst the women I know there is absolutely no way you could guess who has slept with the most men simply by looking. Hell, look at me in my baggy jeans and overcoat and try and guess my sexual history.

I know a woman who had the phrase ‘Muslim bitch’ thrown at her as she passed a group of young men outside a convenience store. Her reaction, and that of all of us who heard about the verbal attack, was to label those young men ignorant, bigoted pigs. The idea that she somehow brought this on herself because of her clothing is frankly offensive.

The comparison with my hijab-wearing friend is apt and I want to explore it a little further. Some people would argue that she did indeed incite the thugs by dressing in a way that advertises her faith. As this well-rehearsed argument goes, women who wear the hijab know that they stand out in the community and so can’t complain when they are abused or discriminated against because they are choosing to draw attention to themselves.

There are plenty of problems with this line of argument, but two in particular are relevant to our discussion about my allegedly slutty-clothed friend. First is the assumption that women’s clothing is a costume meant to signify to our audience what role we are playing, and that we should not complain when our audience responds accordingly.

Of course clothing is a social signal. Many people dress to signal their rejection of mainstream aesthetics or their identification with a sub-culture, for example. Adherents of certain religious groups do the same thing. Even those of us who don’t dress to express membership of a specific group, do adjust our attire depending on the location. We do this because we understand that jeans and sneakers ‘say’ something different than a suit or a bikini or a cocktail dress.

But recognising that clothing is a social signifier is not the same as saying that it invites a specific response. You see a woman in a dress that reveals a lot of skin: maybe her choice of clothing signifies a desire for attention. Maybe it signifies that she is part of mainstream fashion culture. Maybe she loves the colour or fabric. Maybe she wants to keep cool while out dancing. It’s not the right of others to pass judgment on what a woman is ‘saying’ or ‘asking for’ by dressing in a particular way.

The other problem with assuming that women in hijab or short skirts or whatever are inviting a particular kind of attention is that it’s impossible to anticipate how a random person will react. You might think your mid-calf skirt and long-sleeve blouse is modest but that Taliban wannabe at the bus-stop could become inflamed by your naked ankles. And the woman who was abused for wearing a hijab may leave it off next time and be insulted instead for her form-fitting skirt.

Certain ways of dressing may attract more attention than others, but some men will continue to insult women on the street no matter what the women are wearing. The office creep who stares at his colleague’s breasts or legs will do so regardless of how she is dressed, and there has probably never been a rapist who has let a potential victim walk on by because her dress was ankle length.

The subject of slutty clothing becomes particularly fraught when it is concentrated on teenagers. Most have heard their mum or dad utter the timeless classics: ‘Your skirt’s too short!’ or ‘You’re not leaving the house dressed like that!’ I don’t know how many times I’ve heard men—nice, progressive, liberal men—make comments along the lines of ‘I wouldn’t let my daughter dress like [Paris Hilton/catwalk model/random girl standing at a bus stop] because I know how teenage boys think.’ It’s not sexist to suggest teenage girls cover up, they argue, because it’s a biological fact that teenage boys are obsessed with sex and will think about, if not try to initiate, intimate acts with said innocent but skimpily dressed young girls.

Let’s get real: teenage girls do sometimes wear skimpy clothes. You can sort of see how some older people might make a comparison between the tiny skirts and skin–tight tops of teenagers and those of street-walking sex workers. But I bet that if those same critics opened up their teenage photo albums they’d find the same so-called hooker-wear proudly on display. I’ve seen photos of my mum and her sisters as teenagers and they’re wearing skirts so short that I can’t believe someone didn’t write an editorial about the improper influence of Twiggy. Chances are your parents have similar pics stashed in a drawer somewhere.

See, the clothing of ‘young people today’ is exactly the same as the clothing of young people yesterday (every yesterday) in that it is designed to: a) differentiate their generation from the one previous—whether Mum is a right-on feminist or a traditional homemaker, dressing like a burlesque dancer will work nicely to show the world you are not your mother; b) identify with a culture or sub-culture; and c) display sexual awareness and interest.

Obviously it’s the last one that agitates parents and excites the commentariat into a scarcely concealed sexual hypocrisy. The Australian current affairs magazine The Monthly illustrated an article about ‘sex and power in the age of pornography’ with a full page photo of teenage girls in very short skirts. The Sun-Herald’s feature titled ‘Sass to sleaze: the new girl power’, worried that raunch culture has ‘gone too far’ and then went rather far itself using three close-up photos of starlets’ breasts, another pic of a singer’s bare thighs and one of a pole dancer. The presentation of these two articles is representative of the mainstream media’s approach to the subject: young women are perved on, photographed, used to sell papers and then told to stop being so damn sexual.

But teenagers, whatever they wear, are sexual. We seem to have no trouble accepting this about boys: think of modern pop culture classics like American Pie or Superbad in which the quest for sex is an integral part of male bonding and coming of age. The fact that male sexuality is not feared and restricted like female sexuality is evident in the way our culture looks at teenagers. Adults may roll their eyes at boys with their pants half fallen down but there’s no panic about boys showing their bums in order to attract sexual partners.

Yes, clothes for teen girls do tend to reveal more flesh than those for boys, but that’s a reflection of a culture in which women are always provided with less fabric than men (think tux compared to evening gown; men’s business shirt compared to women’s), rather than a signal that they’re up for an orgy. They may well be up for that or anything else, of course, but their outfits aren’t going to tell you that. Clothes do communicate messages, but you have to understand the language to read them properly and, when it comes to teen culture, most adults don’t have a clue.

Teenage boys, on the other hand, do. Many of them are also, it is fair to say, preoccupied with sex, but that fact has no connection to what the girls around them are wearing (just like teenage girls think about sex no matter what the boys around them are wearing). A heterosexual teenage boy is capable of being turned on by anything even resembling a woman’s body. If a girl goes to school in a shapeless sack, teenage boys will spend all day imagining what is under it. Does anyone think boys in the 1950s didn’t have fantasies about what the girls hid underneath their pleated skirts?

5 thoughts on “The Blame and Shame Game”