The last couple of years have been tough for many communities where Enlighten works, with natural disasters such as flooding in many parts of Australia and the devastating earthquake that claimed so many lives in Christchurch, New Zealand. There are many stories of tragedy and heartbreak — but if there’s one thing I’ve learned in working with young people, it’s that they have an incredible, deep capacity for resilience, compassion and love.

Enlighten’s New Zealand program manager, Rachel Hansen, who has worked with a number of Christchurch schools in the year since the earthquake, tells me she is in awe of the resilience of the students and the staff.

Many of them had endured great hardship – losing homes and loved ones. Some were also living with family members who had been severely injured or traumatised. One thing that really moved me was when the girls spoke about how important their friends had been in the months following the quake.

As many of their lives were in chaos they learned how to lean on and really support their friends even more. There was a real sense of sisterhood at having been through something so big together.

Christchurch endured a particularly bitter winter last year, and some of the schools were teaching out of marquees and tents. In December I worked with 130 girls in a marquee (which was their ‘Chapel’ and Assembly Hall, as both had been destroyed). It was a particularly hot day and by the afternoon we were sweltering as if in a sauna. However I was struck by how accepting and cheerful the girls were about everything – it was as if it wouldn’t occur to them to complain. Their teacher told me that when it rained during assembly and the water swept through the marquee the girls would just lift their feet to keep them dry.

There is much we can do to support young people who have lived through natural disasters or other traumatic events, so I’m sharing this guest post by our wonderful Queensland presenter Storm Greenhill-Brown, who has been affected by the flooding in her own town, Ipswich, and has some great ideas for helping the healing process. 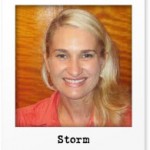 We have had a rather turbulent past year in Queensland. The floods of January 2011 and this year’s flooding in the western part of the state caused great distress for many and have had a significant impact on the Queensland psyche. Recovery efforts are ongoing and emotions are still raw for those who have suffered. Many homes damaged by the 2011 floods were only just rebuilt over Christmas — a full year later — while some families are in a seeming state of limbo waiting for insurance claims to be settled and builders to be found.

What has this turmoil meant for children, whether they were directly affected or not? How can we as parents and as a community help our young people to develop resilience in the face of such traumatic, life-altering events?

The Quest for Life Foundation provides an excellent online series and downloadable workbook for those helping young people through the recovery process. The foundation suggests that we must first assess the impact of a traumatic event on a teenager’s or younger child’s life. How much a child understands and is able to process will depend on their age.

The deep grief of losing one’s house, pets, possessions or family members often results in negativity and a sense of doom. Young people may experience feelings of great fear and a heightened belief that the natural world is wild and dangerous. Parents’ responses to such events are very important. As one flood-affected local mother said, “Our children are around adults who are emotionally unstable on a permanent basis.”

Children need to know what has happened and, importantly, what is being done about it. As adults, we must be able to discuss issues as they arise, but it is important that we don’t overwhelm children with images and information they do not need. An overload of images of earthquakes, tsunamis or flood devastation can potentially be destructive for young people. Teens especially may feel a loss of control or a sense of helplessness and futility.

It is important that children learn to feel compassion and empathy for others, and to focus on questions like “How can I help?” and “In what small way can I make a difference?” By offering practical help to other families, young people can gain a sense of purpose and hope. During the floods, two local boarding schools in my area, in Ipswich, were turned into emergency accommodation centres, and many of the girls and boys from those schools worked selflessly to help families in need. Instead of simply relaxing on their holidays, they worked in shifts gathering and sorting blankets, clothing and food. Many of them took immense satisfaction from being involved. It was a great example of how teens can benefit from looking beyond the boundaries of their own world, which during adolescence tends to narrow down to the self. “More than myself” can be a powerful mantra for young people who are questioning their place in the world.

In my town, a local mum whose entire neighbourhood was decimated by the flood decided to create a support network in her area. This amazing group of women banded together armed with buckets, mops and shovels and began the cleaning and rebuilding process. Because many families were not covered for flooding by their insurance policies, or damage assessment was taking a long time, they felt something had to be done. What inspiring role models these women were for their daughters and sons. Instead of focusing on what they had lost — which was a great deal in many cases — they chose to be grateful for what they managed to save and what they could do for each other. They acknowledged their loss but embraced the positive. To me this is resilience in action, and resilience is a lifelong skill that should be nurtured in our kids.