Don’t you just love good quality, free lesson plans and teacher resources? This web site one is one of my more recent discoveries: 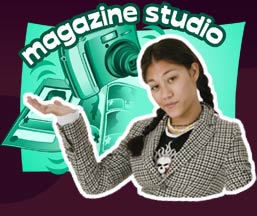 In the Magazine Studio, users compose a magazine layout featuring themselves as celebrities. They write an advice column, explore the power of digital retouching, and reflect on the role of body image in today’s culture.
In the TV Studio, users edit a TV show where the story keeps changing but the images remain the same. They examine their TV viewing choices, comment on teen celebrities, and compare their daily screen time with others.
In the Music Studio, users create a pop star and compose her image and song. They explore the power of music in selling a product and search for truth in media gossip. The comment on the values messages in popular music.
In the Digital Studio, users test their multi-tasking abilities. They share their experiences with the challenges of digital life online. They consider the “what if’s” of social networking sites and reflect on the power of media and technology in their social relationships.”

I have played around on this site and think it will have enormous appeal as it is really educational, interactive, and fun! There are also excellent accompaning lessons and activities for teachers and parents too (all free and downloadable as PDF’s).

I particularly like this one on photo fakery  photo%20fakery.pdf

“After playing Photo Fakery, students look at the web site of a professional photo re-toucher and read and discuss a persuasive essay about the impact of digitally manipulated images on personal identity and cultural values. This activity strengthens reading comprehension, critical thinking, and writing skills. After reviewing the vocabulary as a pre-reading activity, students read independently and complete the questions. Afterwards, they discuss the questions provided on the worksheet.”

It would be marvellous to adapt this exercise for seniors by getting them to read through the highly controversial and illuminating article that appeared in The New Yorker this week on premier photo retoucher Pascal Dangin – “Pixel Perfect.” This article is jaw dropping.

Pascal is the photo retoucher the magazines call in “when they want someone who looks less than great to look great, someone who looks great to look amazing, or someone who looks amazing already-whether by dint of DNA or M·A·C-to look, as is the mode, superhuman.” We are told that in the March issue of Vogue alone “Dangin tweaked a hundred and forty-four images: a hundred and seven advertisements (Estée Lauder, Gucci, Dior, etc.), thirty-six fashion pictures, and the cover, featuring Drew Barrymore.” Not surprisingly, his work is not credited in the magazines that pay him to “translate” their images. How disturbing is this observation by writer Lauren Collins: “Dangin showed me how he had restructured the chest-higher, tighter-of an actress who, to his eye, seemed to have had a clumsy breast enhancement. Like a double negative, virtual plastic surgery cancelled out real plastic surgery, resulting in a believable look.”

Dangin is the man behind the Dove Real Beauty / Real Hypocrisy controversy I mentioned last week – in this article he claims he did the retouching on their ad’s too: “Do you know how much retouching was on that? But it was great to do, a challenge, to keep everyone’s skin and faces showing the mileage but not looking unattractive.”

Used any excellent resources in your classroom? Love to hear about them!