This week the HSC exams finished for another year and, as an educator and the parent of a teenage girl who sat her last test on Monday, I can’t help but reflect on this time.

Not so much on the historical dates and quotes from literature she may have memorised, but on what I hope she and her peers have really learnt from surviving this academic rite of passage.

At some stage during these gruelling last years of high school (years one girl ­described to me as being like The Hunger Games “where kids battle it out against other kids and feel like they could die at any moment”) many teens will want to give up. Some on a weekly basis.They may fantasise about opting out and running away, of getting a rare illness that will leave them unable to do school work (yet strangely still able to watch re-runs of Gilmore Girls and hang out with their mates), of doing anything other than write yet another essay.

But they back up again the next morning, pack their schoolbags, and get on the school bus. Many will think no one understands what they’re going through.

If they read any of the more negative media reports that ­eagerly brand them whingers and wimps, they may even think others are relishing their struggles.

But then they’ll have a debrief with their mates at lunchtime, or find virtual kindred spirits via social media, and ­realise everyone else is just as anxious, stressed and unsure as they are.

They’ll learn that there is a deep comfort in this connection and find relief through using humour (even at times dark humour) to vent.

They’ll learn, too, that those who can see the funny side are highly valued. How else to ­explain why a student named Kelvin who loves “photography, chess, memes and math” developed a cult-like following among the 60,000 students who were members of the Facebook page for 2016 HSC students he helped moderate?

At times they may despair that each failed assessment will have ruined their future life plans.

And yet in the next task they complete they will have performed better than they had hoped for, or their plans will suddenly take on a different shape and they will realise there are still possibilities; that there are always possibilities.

Make no mistake, I don’t think for one minute the current system does our kids any favours by teaching them more about perseverance, camaraderie and resilience than it does about learning.

But I have taken enormous pride and solace in seeing my daughter and her peers realise they are stronger and more ­determined than they had ever realised they could be.

Class of 2016, I’d love to tell you that you will never again be put under such huge pressure, or have your worth sized up by a rank, or be asked to do tasks that seem to have little real world relevance.

The reality is, you may have to face all these demons again.

Feel free to celebrate by burning your books, and gleefully forgetting your math equations. But don’t ever forget what you have learnt about you this year. 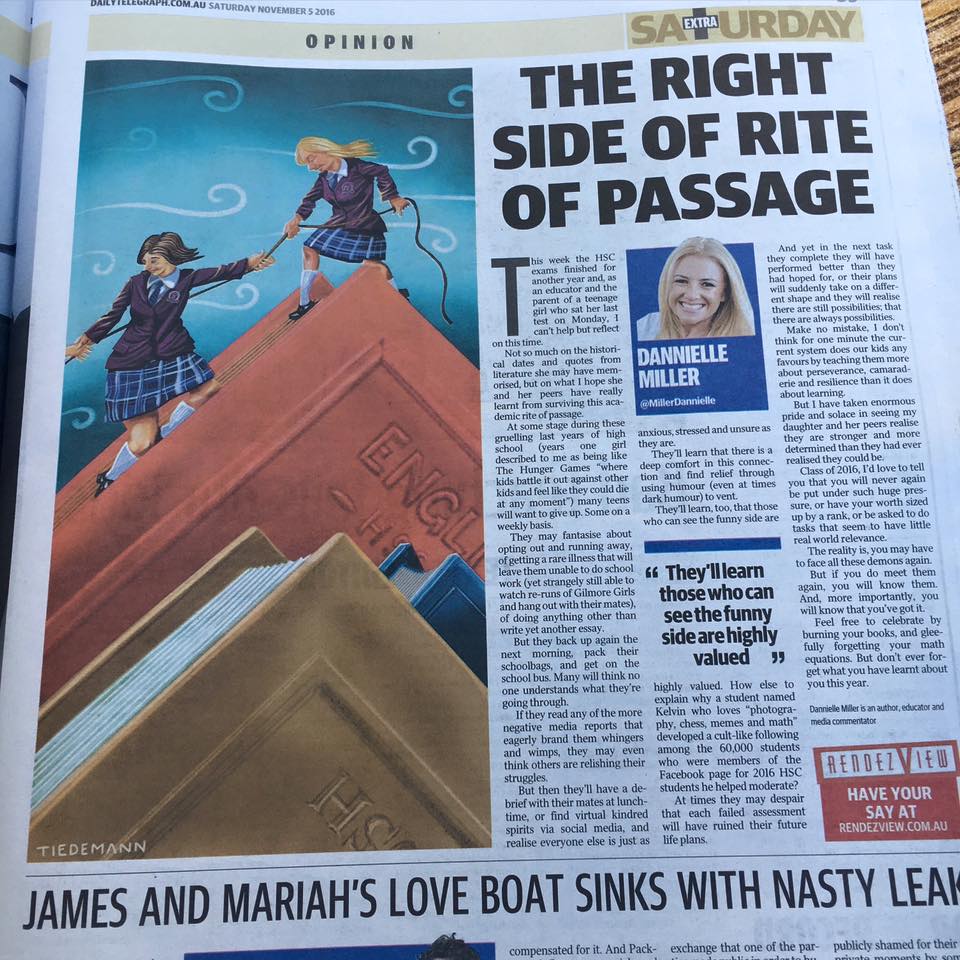 This post was first published in the Daily Telegraph, 5/11/16.