Last week, I did a post sharing media I have been doing aimed at encouraging schools to be more proactive in dealing with sexual harassment. I received a comment from one of my blog readers that at first shocked me . . . and then got me thinking about another issue that affects all women and girls: the tendency in our culture to demean women for their looks rather than to engage with what they have to say. The comment was short, and cutting:

We’ve seen your talks at schools. If you’re so keen to set a good example then don’t turn up to school looking like mutton dressed as lamb. — Kim

I wondered exactly what it was about me that came across that way to her. When I do my self-esteem and skills-building workshops with girls, I wear an Enlighten Education uniform of sorts. We are often up and jumping around with the girls, so skirts and high heels are definitely out. It’s jeans or tights in winter, or mid-length shorts in summer, and then a black T-shirt embroidered with our butterfly logo. 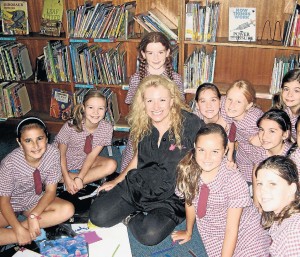 Then I realised that the comment had drawn my attention away from the real issue: too often, when women raise their voices, they are criticised not for what they say but how they look.

Even now, in 2010, is that the currency of a woman or a girl — her looks? Is a female’s Achilles heel still her appearance? If you strike her there, do you take away her only power?

It isn’t the first time I’ve spoken out about sexual harassment or a women’s issue and been criticised not for my arguments but for the way I look. I have been helpfully informed that I seemed to have put on weight. I was sent an e-mail telling me that I couldn’t be a feminist because I have blonde hair. During the 2009 scandal involving Matthew Johns and teammates having sex with a 19-year-old girl, I wrote an article in defence of the young woman, who was being blamed and insulted in the media and on the internet. A reader commented that I was just jealous because I was wasn’t desirable enough to get a football player of my own.

I’m in good company. The woman whose writing had the most profound effect on me when I was young, Naomi Wolf, received a torrent of criticism for being too pretty to be a real feminist. On the other side of the coin, Germaine Greer has long been attacked for all sorts of supposed flaws in her appearance and femininity. Earlier this year, Louis Nowra described her in The Monthly as “a befuddled and exhausted old woman” who reminded him of his “demented grandmother”. It should be noted that Greer herself is no stranger to flinging looks-based insults, famously describing a fellow writer as having “hair bird’s-nested all over the place, ****-me shoes and three fat inches of cleavage”.

Comments that target a woman for how she looks, rather than her ideas, are designed to do one thing and one thing only: to shut her up.

There’s no way you can present yourself that won’t attract criticism from the kind of people who think that criticism of a woman’s looks will hurt more than criticism of her ideas . . . It only makes me more sure that this stuff is worth speaking out about. — Emily Maguire

Melinda Tankard Reist is an author and commentator who often appears in the media to speak out against the sexualisation of girls and women. She publicly commented on the decision of former Hi-5 performer Kellie Crawford to pose for a lingerie shoot in Ralph in order to “find the woman in me” after so many years as a children’s entertainer. Melinda asked people to question why the Wiggles didn’t need to “prove their manhood by stripping down to their jocks”. Much of the criticism she received afterwards didn’t address that question but told her that she was “a bitter ugly woman”, “sad, old and dog-ugly” and that she had “saggy breasts and a droopy arse”.

Old, saggy, mutton dressed as lamb — age is a common theme to this type of criticism. Rather than seeming to gain wisdom, experience and authority — as is virtually expected of men — women are often deemed of decreasing value with each year they move beyond their 30s. We see it throughout our culture. How many good roles are there for actresses over 40? How many women newsreaders have career longevity without resorting to Botox? It is as if once women have passed a certain age, it is time for them to step off the stage. It’s no wonder that many women are angsting and trying to achieve the body of a 20-year-old — an impossible and time-wasting task. Zoe Krupka put it perfectly in a post on the website New Matilda:

How are we meant to do our work in the world and develop wisdom if we are still focused on the size of our butts? — Zoe Krupka

One would hope that the situation was improving, but in fact, it seems to be getting worse. And it is often women who use the strategy of attacking a woman’s looks. Dr Karen Brooks, social commentator and author of Consuming Innocence: Popular Culture and Our Children, told me:

I have had my appearance criticised ALL the time . . . This has been happening to me for 13 years and it’s getting worse . . . I should add that most of the negative comments are from women. — Karen Brooks

Perhaps there is an element of fear of change that drives women to this type of criticism. Perhaps this technique just comes all too naturally to women who have spent their whole lives learning how to play the “compare and despair” game. Perhaps the ultimate sin for women is to show confidence and to love themselves, so critics feel that outspoken women need to brought down a peg or two.

Whatever it is that drives looks-based criticism, the thing that hurt me the most about the comment I received on my blog was that this woman claimed she had seen me present to girls. At every school Enlighten Education has worked in, the girls line up afterwards to ask for a hug, a kiss and to tell us they love us. They tell us that it changed their lives. So it made me sad to think that in the presence of all the joy and positivity and love that bursts out of these girls, for at least one woman the lasting impression was my looks, something that the girls never notice or comment on.

Imagine the change we all — women and men — could make in the world if we took personal attacks out of public debate. Imagine if we all engaged in the debate, made respectful counterarguments, added our own ideas into the mix. Imagine if we all pledged to stop trying to silence one another. I have the greatest respect for the women thinkers and activists I have mentioned here. Do I agree with them on every single issue? Of course not. But I pledge to always argue my case while according them the respect they deserve. It will always be their ideas that I engage with, because ideas — not physical appearances — live on forever.

A comment I received from another woman sums it all up: 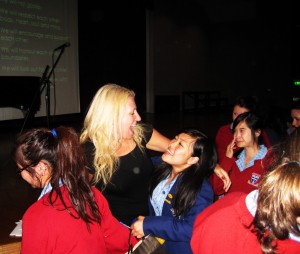 17 thoughts on “Sticks and stones”