I was recently invited onto Channel 7’s The Morning Show to discuss an “Extreme Makeover” story in Girlfriend magazine’s June 2009 issue. Using before and after shots of a teen girl, they show readers just how much work goes into producing the perfect images on magazine covers: the hours of hair and makeup, clever lighting and photography, and fashion styling – not to mention all the digital manipulation necessary to make beautiful girls impossibly flawless, with no blemishes or cellulite, and with perfectly white teeth and eyes. According to the magazine’s editor, Sarah Cornish, Girlfriend’s aim was to dispel the myth that readers too should – or could – look like the beauty icons they see in the media. Click on the screen image below to watch the interview I did alongside Sarah Cornish, or use the following URL: http://au.tv.yahoo.com/the-morning-show/video/-/watch/13306869/ 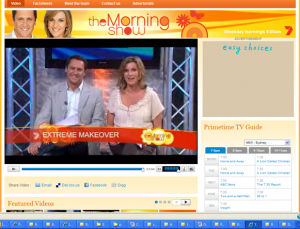 I applaud the magazine’s sentiment, and the June 2009 issue of Girlfriend magazine does include some good articles. There is a “Love Your Body” section and a sealed “Good Advice” section that presents the advice of psychologist Michael Carr-Gregg, author of books on parenting teen girls, and Dr Sally Cockburn, aka radio’s Dr Feelgood, an expert on women’s health. But this valuable and positive information is offset by a range of advertisements and advertorials that offer conflicting, toxic messages. How about this full-page advertisement on the inside back cover? 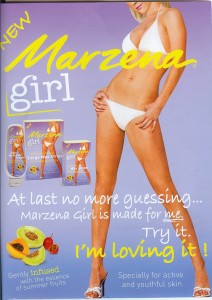 The model looks like she has stepped straight from a shoot for the men’s magazine Ralph: stilettos, skimpy bikini, large breasts. She is faceless. It is all about her body. The ad is for hair-removal products “specially for active and youthful skin”.

After we finished filming the segment at the Channel 7 studios, I raised my concerns with editor Sarah Cornish, and she agreed that the ad was not consistent with the values the magazine claims to espouse. She also assured me this particular ad would not get run again.

Sarah, and indeed all magazine editors, are in highly influential positions and have the power to communicate helpful messages to teen girls about body image. The need to do so has never been more urgent. Girlfriend magazine itself acknowledges in another article, “Drastic Plastic,” that 26% of their readers admit they have contemplated cosmetic surgery as a solution to their angst about their bodies.

I appreciate that editors may not be able to completely revolutionise their magazines overnight, and I suspect that in our tough economic climate they may even become less selective about the advertising they accept – but if they are serious about their commitment to young women, they simply must be more vigilant. During our brief meeting, Sarah struck me as genuine and open to an ongoing dialogue about how she can improve the messages she presents to girls. Watch this space.

4 thoughts on “Step in the right direction or PR exercise?”