Looks like thin is no longer in. Skeletal is the new body ideal judging by the physiques of the female celebrities who are hot property right now.

I have to confess that I, and a number of my friends, were more than a little excited about the premiere of the new 2008 version of 90210. We were all huge fans of the original 1990’s series. The first ever episode aired when I was 13 years old and I was immediately hooked – complete with a huge crush on Dylan and a keen eye that followed the fashion choices of my new role models.

So I must admit that the thought of catching up with Kelly and Brenda again had me refusing to take calls from 8:30pm on the first night it aired.

And yes, it was fabulous to see Kelly and Brenda again (who were reunited at the Peach Pit nonetheless!).

However, I was very distressed by the new female cast who now play the children and little sisters of the originals. They are so thin. I am talking painfully thin. The lead girl “Annie” (played by Shanae Grimes) and her friend “Silver” (played by Jessica Stroup ) are excruciatingly skinny. As one of my mates so eloquently put it in her text message to me during the show the other night, “Watching this is making me hungry”. The characters must be hungry too as the only consumables we saw in Episode 1 were alcoholic beverages, coffee and salads (Annie had salad for lunch in the cafeteria, I guess you can’t look as tiny as she does by eating carb’s/protein/fat/non-vegetable matter). Why can’t teens on TV eat real food anymore? Even The OC had the girls eating burgers, fries, milkshakes and Thai takeaway…. 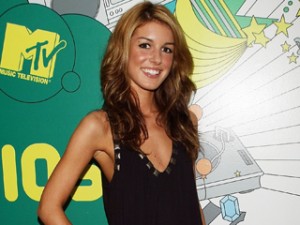 Turns out my friends and I were not the only ones who noticed how thin these new stars are; a couple of articles have popped up on Entertainment websites claiming that “sources” inside Hollywood are reporting talks on set and at the network about the girls’ weight. One article even claimed that the male stars of the program are planning to stage an intervention with the girls as they never eat and the guys think it is unhealthy. Well if this is true, then go guys I say!

Below are pics of the old and new cast… the new photo doesn’t really show just how thin the young girls are in the series (perhaps they airbrushed them to be less thin for the pics?) but oh how the concept of a “hot body” has changed over time. 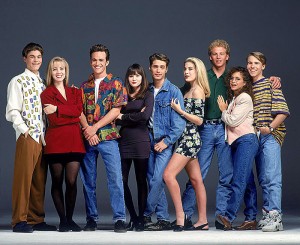 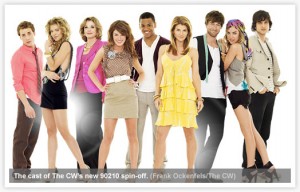 I grew up in the Supermodel era where Cindy Crawford reigned supreme. Cindy was a genetic freak (she was so strikingly beautiful) but her shoulder blades wouldn’t have taken an eye out – she had some flesh on those bones. In the late 90’s Kate Moss rose to fame and the fashion industry deemed the “coat-hanger” was the new body ideal. In turn, this lead Hollywood down the very thin, and the carb-less, garden path. 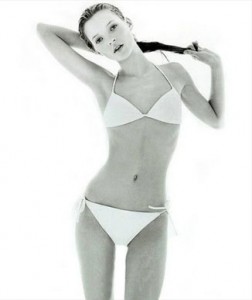 Researcher Botta, in the 1999 study on television images and adolescent girls’ body image disturbance, made the observation that “our culture’s obsession with the thin ideals is now played out in the media via models and actresses who may have eating disorders themselves, who may have personal trainers to help them maintain a thin body, and whose bodies, as portrayed through airbrushing and camera-angle techniques, may not even be their own.” What would Botta have made of 90210 – 2008 style?

Surely it’s not just me being alarmist, and surely the new “Beverly Hills waifs” provide just one example of how much worse have things become.

We are now seeing children as young as 8 hospitalized with eating disorders. Dieting, detoxing, purging…all have become normalized. I have been engrossed in the work of Courtney E Martin; her book “Perfect Girls, Starving Daughters” really sums it up as she points out just how “normal” it has become to equate thinness, food deprivation and excessive exercise with success. Martin also looks at just how much time women spend thinking and obsessing about dieting and their bodies – is this what we want for our young women? To rate “thinness’ over wit, intelligence, talent, warmth? To waste their energy thinking about how they look in skinny leg jeans? No way!

I am hoping the backlash over the body shapes presented on the new 90210 continues to grow. We need to be speaking about this! We need to open our eyes and minds to a broader concept of gorgeous.

Because this look is killing us – literally.

Finally, on a lighter note, if you do still pine for your fix of 90210 (there are rumours of Dylan making an appearance so I can’t tune out yet!) or one of the array of other crappy American shows of this genre – do as my friend does in her share house with the four young women she lives with. Make Monday nights “90210 and cookies” night. Indulge in all the fun, fashion and cute boys without the starvation.

10 thoughts on “Starving for attention”