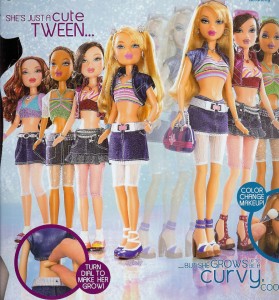 Unlike most little girl’s dolls, which are designed to represent older teenagers or women, Mattel’s “My Scene, Growing Up Glam” doll openly set out to depict a tween, a girl aged 8-13 years. She is dressed in lace stockings, short skirt, diamante belt, midriff top and wears a full face of heavy make-up ( complete with false eye lashes). Her cute accessories? A teddy bear and school books: 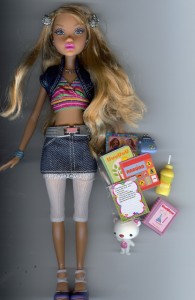 Twist the screw on her back (oh how symbolic!) and her abdomen stretches. It’s gruesome to watch. She looks like she is being stretched by a medieval torture device. 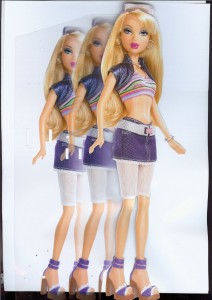 Hey presto! Now she’s a “curvy, cool teen.” But wait, you say, all that has really changed is that her stomach has stretched to make her appear taller!

How telling. It seems there is no physical difference between an 8 year old girl and an older teen in Mattel land.  Nor should the clothes they wear differ. The accessories do change though – she trades in her school books and teddy bear for a full make up kit (“Whoa, her make up changes too!”) and some glossy fashion magazines. Flats shoes are out – its all about the stilettos now. Out too with cute hair clips and in with designer sunnies. 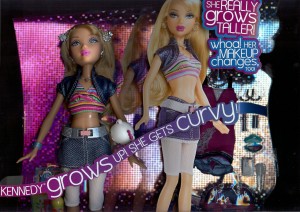 Where do I begin in explaining why this type of doll is so toxic for our daughters? And why do I feel I must actually explain why this is not acceptable. Isn’t it self-evident?

In the wake of the Senate tabling the findings of its much anticipated inquiry into the sexualisation of children in the contemporary media environment in parliament last week, more than ever I feel I need to justify my concerns.

The committee observed “…that children are certainly more visibly sexualised in terms of the media to which they are exposed. This basic assumption was not challenged by any evidence received, and is based on recognition of the increasing targeting of products to child-related markets and the greater exposure of children to information via the many available media forms, and particularly the Internet. However it would be a mistake to equate these influences with actual harm.”

Why would it be a mistake to equate these influences with actual harm? Because not enough long term research has been done yet on the impact of the sexualisation of children on their physical and mental health? Does anyone think for one moment that any research that is commissioned will come back showing that stealing childhood has actually been helpful? Healing? Why do we need to wait for more numbers to come in before we act – there has already been a large body of research that has alerted us to numerous potential dangers including an increase in eating disorders, self harm, risky sexual practices.   Why can’t we err on the side of caution when it comes to protecting children?

Clive Hamilton, former Director of the Australia Institute whose report ‘Corporate P-dophilia’ prompted the Senate Inquiry, summed up the recommenations thus: “The recommendations..amount to nothing more than a polite request that advertisers and broadcasters might perhaps, if it’s not too much trouble, consider listening to community concerns a little more.”

I have found the debate surrounding the Inquiry very interesting too. Those who dare question the path society is taking have been labelled prudish, out of touch, alarmist. Catherine Lumby, the Director of Journalism  and Media at UNSW, expressed concern that some commentators were viewing children as “uncovered meat”, she told the world she was “furious” that children were being made to feel ashamed about their bodies.

I will join Catherine in her fury if anyone dares suggest children’s bodies are provocative and need to be covered up. I too will dismiss as alarmist anyone who wants nappy advertisements banned. But I haven’t met, nor heard, from any of these types. I haven’t seen people up in arms over singlets, or nappy ad’s or innocuous pictures of girls looking pensive. Such people may well exist at one end of the continuum, just as those that design t-shirts for toddlers emblazoned with “All my Daddy wanted was a blow job” do exist at the other end of the scale.

And Ms Lumby just for the record, I have never had a problem with teen girl magazines offering age appropriate advice on sexuality. Magazines are a valuable source of information as some parents do feel uncomfortable having these important conversations with their children. But I do think some of the advice and articles offer too much too soon – do tweens and teens really need detailed information on anal sex and to be told it is a “personal choice” ? Isn’t there a risk that a twelve year old will feel left out when she reads in the June issue of Dolly that over 21% of the readers profiled in their sealed section say they lost their virginity between the ages of 10-13?

And it’s not even just the advice and articles that concern me – it is the mixed messages buried within the pages that really trouble me. The mag’s occasionally do offer great articles on self esteem and body image, yet they allow advertisements for mobile downloads that include slogans like “Save a virgin, do me instead” and “Fancy a quickie?” I never wanted magazines to be banned. I just wanted common sense self-censorship, and age appropriate guidelines on the covers to alert parents and readers to the fact that the content might not be as innocuous as the oh-so-wholesome airbrushed covers might lead one to believe. It seems even this was asking too much.

Do I sound like a sore looser? I feel like one. There was a lot to loose.

I am comforting myself by holding on to the belief that despite the senate’s softly, softly approach, the process itself has at least brought about a heightened awareness of the issues.

Instinctively, we all know that we do not need a government report, or a team of academics, or a myriad of research papers to tell us that enough is enough.

And despite the divisions there is one point on which every one seems to agree – education is key. Girls and boys, now more than ever, need to be savvy media navigators. They need to be given the skills they need to make sense of the adult world that is becoming more and more part of their childhood world too. Teaching and helping girls navigate Girl World is the work that I love passionately, and it is the work that my team and I are gifted in doing well.

This week my own real life “too cute tween” , an eleven year old girl I worked with at a school recently, was told by her dance teacher that she had to start wearing not just a full mask of make-up for her dance concerts, but false eye lashes too. When her mother, who has completed my course for parents, questioned why this was really necessary she was told by the dance teacher that the eye lashes would “increase her (daughter’s) confidence.” Mum and “Ms Enlightened Tween” are both saying no. Neither are comfortable with this and both feel that long batting eyelashes are just too much. As is so often the case, the dance teacher tried making Mum feel stupid – “But all the other parents think it is fine.” When Mum investigated this claim, she found that four out of the ten dance mothers were also actually really worried about the appropriateness of wearing false eye-lashes but they had been scared to speak out.

And whether you think the eyelashes were actually harmless or harmful is ultimately immaterial. What I love is the fact that this little girl will no longer allow herself to be stretched and pulled into becoming a “curvy, cool teen.”

She’ll be a teen who will set boundaries, deconstruct all the mixed messages she will be presented with, and make choices she is truly comfortable with.  She will not allow her sexuality to be shaped by misogynist music, plastic Paris-wannabee dolls, or the contemporary media environment that would have her believe that everyone is up for anything, all the time, and that to be hot she will have to get more make up and less clothes. 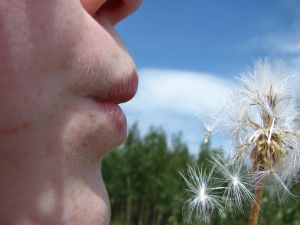 P.S In an effort to offer parents something positive they can latch on to a resource, I have asked Women’s Forum Australia to reproduce here an article from their excellent publication “Faking It.” The extract below in PDF format is entitled ” The sum of your body parts – reducing women to sex objects: how it happens and how it hurts us.” It is a great catalyst for conversation – and we must continue having powerful conversations.

Interested in finding out more? “Faking It” is also being launched in Sydney in July:

This will be one of the World Youth Day events, a chance for the Get Real! message to go global. The event is open to all, even those who are not official WYD participants: go along and be empowered and inspired to GET REAL! I spoke at the launch held in Perth earlier this year and thought the night was just brilliant. So inspiring! For more information, or to let them know that you’re coming, contact

Finally, the PDF below is the Facilitator’s guide for the Canadian Documentary on the sexualisation of children entitled “Sexy Inc.” Even if you have not seen the film, the booklet offers excellent discussion questions:

STOP PRESS – there has been a change of venue for the “Get Real” event – it will now be held in the Parkside Ballroom, Sydney Convention Centre. Same start time. I have been asked to be the MC – hope to see you there!