This week I am proud to have been given permission to publish an extract from one of the speeches given at yesterday’s Reclaim The Night rally in Sydney; this was given by 16 year old high school student Lily. The event was part of what is now a world-wide protest movement by women against sexual violence.

I am awed by Lily’s strength in speaking out in this way, and encouraged by the incredible grass-roots feminist group she has helped establish at her school.

May she inspire us all to work even harder for, and with, our girls. And may we all seek to create even more opportunities for young women to be given a platform from which they can share their experiences too. 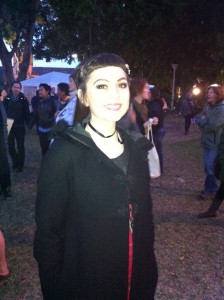 Good evening! Thank you so much for having me. I’m Lily, I’m 16 years old and currently starting Year 12. I’ve spent a good amount of time with technology in my life and tonight I’m going to be speaking about the treatment of women on the internet today, as I see it and know it, and the experiences that other women have had online.

I’d like to start by giving a shout out to the feminist group at my school, Collective Voice, who are here today (there’s the banner)! In 2010 Collective Voice was started by our teacher Ms Fajou, in response to a lack of discussion with our peers about the sexism teens receive from the media, and each other. We discuss what feminism means to us – how we feel about body image, violence against women, homophobia, politics. We run campaigns at school encouraging girls to reject “beauty standards”, making posters and signing petitions.

We also have a very active Facebook page that we use to share videos, articles and current events connected with feminism. Here we share discuss issues that matter to us as young women. It’s awesome. We are building skills of productive dialogue and knowledge and opinion, which is powerful. One thing that we’re working against with Collective Voice is the widespread level of online sexism; a lot of online spaces have been claimed by a boys’ club of obscenity, anonymity and oppression.

I believe it is important, vitally important, to acknowledge that what happens online is still valid despite not being ‘in real life’. The attitudes and beliefs you encounter, the harassment you face, and the sexism which manifests is just as real online as offline. Just like in workplaces, boardrooms or any other social environments, online spaces can be made to feel unsafe and threatening. And when women perceive a space to be unsafe or threatening they are less likely to be able to participate equally in that space. If we stepped into a public space or workplace that was adorned with unavoidably graphic pornographic posters, where the people who you approached yelled hate speech at you or harassed you, where you were belittled or denied equal treatment due to your sex, gender, orientation or opinion – it would not be acceptable.

About a month ago, I attended my year 11 social. I had a good time and goofed around a bit, as you do. A few days later I found a particular photo of myself from the social on Facebook; it had been commented on extensively. Over 10 boys and men who are still complete strangers to me commented freely on my appearance, they debated whether they would masturbate to it, they told me that my photo would haunt me for years to come, they openly, and unapologetically discussed what they imagined my genitalia would look like. They were supported by over 40 others, who had ‘liked’ their comments.

This isn’t the first we’ve seen of Facebook acting as a medium for sexism and abuse, however. Notable additions have been “Punch a slut in the face day” (a group set up in a NSW school by boys who then went on to physically assault girls they perceived as promiscuous), “Define statutory: pro-rape, anti-consent” (from the lovely lads at St Pauls college from Sydney University); “it’s not rape if you yell surprise” and a swathe of pages titled with ‘women in the kitchen jokes’ in 2010. We saw the recent case of ‘Root Rate’, a page for young men to publically rate their sexual experiences with women, encouraging a lot of sexism and derogatory comments. Many of the contributors and the girls spoken about were underage.

Just two weeks ago, the world witnessed the case of Amanda Todd, a 15 year old girl who committed suicide after receiving extreme abuse online and in real time. Todd showed her breasts to a man online about 3 years earlier, and for this she was condemned by her peers and others. Before she committed suicide she posted a video online describing her story in detail.

Jarrah Hodge, who writes and educates on gender representations in media, politics and pop-culture, said, “(In the media commentary surrounding her case) there was no discussion of the pressure girls like Amanda experience to measure their worth through their sexual desirability. From her story it sounds like this man had the hallmarks of a predator—he tried to use her photos to blackmail her and yet she’s the one who got blamed. This comes from the idea that it’s up to girls and women to protect their purity at the same time as all their role models in the media say that you need to ‘get a man’ to be a complete person, that you need to be sexually attractive to be liked, appreciated, and valued. She said the guy she showed off to was telling her how beautiful she was. Given our culture that can be really tempting for a girl.”

What is surprising is that sexist, oppressive behaviour online has become very mainstream, especially considering that women make up the larger proportion of users of social media!

Currently 64% of Facebook users are female as are 58% of Twitter users. In theory, online space is a woman’s domain! And yet, online you receive 25 times as much abuse if you state that you are a woman or if your username is feminine…

…This is not a joke. This cannot be trivialised. What happens on the internet directly influences the way people behave in reality, and regardless how we interact with each other online is still a human interaction.

Of course, I am not the only person to speak out against the way women are objectified and men encouraged to degrade women online. There are numerous activists and online petitions targeting Reddit, Facebook and other forums.

It is how these efforts are responded to that perhaps gives us the most frightening insight of all.

Anita Sarkeesian has been running an online video series called Feminist Frequency since 2009, exploring and deconstructing pop culture in an accessible way. Sarkeesian makes video blogs (a form of blogging for which the medium is video, considered a form of internet television) analysing movies, TV shows, music videos – the things that influence us, and especially young people.

Her most recent project has been ‘Tropes Vs. Women in Video Games’, a 12 video project exploring the way women are represented in video games. During the making of it she has encountered unprecedented harassment. She writes:

“… a harassment campaign is being waged against me and has included attempts to get my accounts banned, a torrent of hate on YouTube, plus countless threats of violence, death, sexual assault and rape. As part of that intimidation effort the Wikipedia page about me was vandalized with misogynist language, pornography and racial slurs.This was not done by just one or two trolls but was a coordinated cyber mob style effort involving a whole gang working together.”

So this is what it all comes down to. Sarkeesian, now backed by over 7000 donors, is breaking the rules of the male dominated gaming community with this project. Not only is she attacking the way women are treated in the games, but the way women are treated in the gaming community – there is no space for women to exist at the same level as men in a community which constantly sees them as objects…

…Now, don’t get me wrong, the internet can be a lovely place. And the reason we all use it so much is because it has infinitely widened our ability to learn, communicate and create. The problem lies in dealing with issues of prejudice and offense – we just don’t know how to effectively serve justice online.

There is no ‘one size fits all’ solution for solving inequality on the internet, just as there isn’t one for ‘reality’. But we, as women, do need to be strongly active. We need to take the knowledge and perspective we have and make it heard. The internet is a highly modern space filled with primitive ideals, and frankly, we’re better than that.

So tonight we are here to reclaim the spaces we exist in and make them safe for all women! Let’s include in that, the online space. And let’s reclaim the right for all women to live free from violence, harassment, misogyny and abuse!

10 thoughts on “Reclaim The Night – 16 year old Lily speaks out about the on-line harassment of young women.”