Last week an infographic went viral that posed the question “Which Female Tech Influencer Are You?” By answering inane questions such as “Jimmy Choos or running shoes?” and “White wine spritzer or tequila with worm?” you are supposed to find out which successful female tech influencer you most resemble. 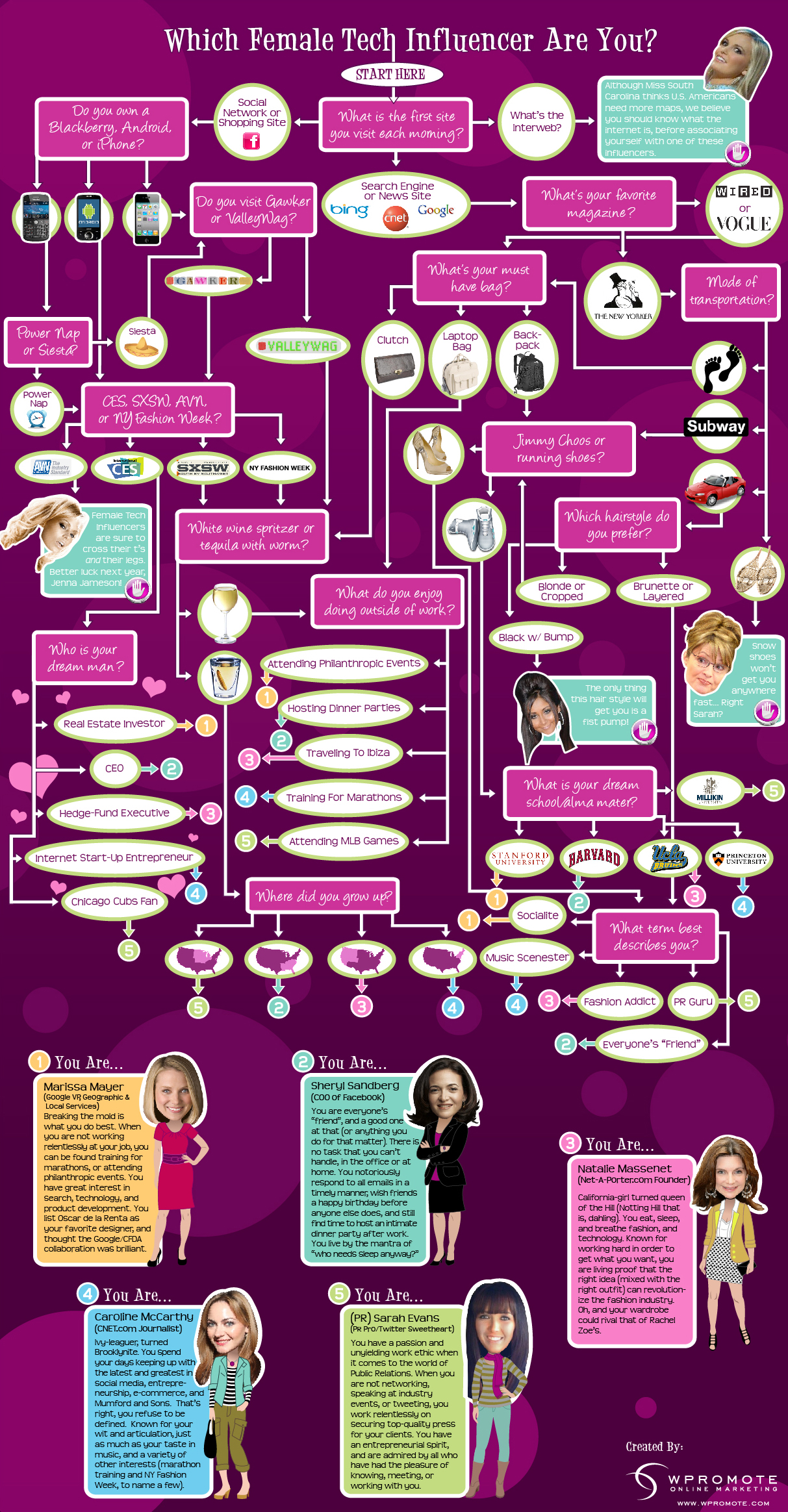 Please. I know this is just meant to be fun but really — isn’t it incredibly patronising to suggest the biggest decision made by dynamos such as Google vice president Marissa Mayer and Facebook COO Sheryl Sandberg is which handbag they might like to take to work? Writer and real-world tech influencer Alexia Tsotsis nailed it on the site Tech Crunch:

The women who have been highlighted here are smart, driven, and have worked hard for their success. They deserve so much more than being reduced to an infographic bobble-head on a cartoon body.

When you think of all the legends in the development of information and communications technologies (ICTs), you rarely hear the names of women. The usual names that spring to mind are Steve Jobs, Bill Gates, Richard Stallman and, recently, Mark Zuckerberg , for being the genius behind the popular social networking website Facebook. Can you imagine anyone asking these men how they prefer to style their hair?

How can we move beyond limiting stereotypes and sexist sniggering?

HERstory is an initiative of Take Back The Tech, a grassroots campaign that encourages everyone, particularly girls and women, to take control of technology and use it as a tool to do something incredibly vital: put an end to violence against women. The campaign lends itself to some excellent and much-needed school-based work on cyber safety and activism. Their website includes sensible online safety tips, campaign banners and posters, videos, blog posts and an “Idea Kitchen” filled with inspiration.  One of those ideas is to tell HERstory by spotlighting “the innovative girls and women around you who are doing creative, inventive and groundbreaking things with technology”.  I had never heard of the following women who shaped the cyber frontier until I visited the website for Take Back The Tech:

Why does telling HERstory matter? Because when only men get attention for their roles in ICT:

This contributes to the idea that ICTs is the domain of men and boys as creators and innovators, and that women and girls are mainly just users and consumers. This in turn affects the choices that parents make in encouraging their children to study science and technology based on their gender, and the masculine culture that permeates the industry, making it hard for women and girls to enter as equal participants and decision-makers. What happens is a perpetuation of this cycle of gender stereotypes and myths that cast women as passive background actors in the development of ICTs and men as active groundbreakers – the stuff of legends.

— Take Back The Tech

I am always inspired by the women I know who are using technology to make changes. The team over at Collective Shout have initiated a number of successful campaigns lobbying corporations to end their objectification and sexualisation of women. Their recent petition to ban the release of Kanye West’s Monster video now has almost 7,000 signatories.

And I am really excited about the new site launched by the Equality Rights Alliance, Sharing Young Women’s Stories. This site has been set up to celebrate 100 Years of International Women’s Day. It features a number of guest bloggers (including yours truly) and encourages people to upload and share stories of women who inspire. There is also a postcard that can be downloaded and sent to  Minister Garrett, asking him to do more to promote healthy body image. Enlighten Education is going to pay to have 10,000 of these cards printed to distribute to our client schools during our upcoming in-school events. We find girls willingly embrace activism!

So, perhaps a revised infographic suggesting the decisions women really make when using technology to shape their careers, and indeed their culture, might actually pose questions like: “You see an injustice. Do you blog on it or set up an on-line petition?” and ” You like to share the love and encourage the women around you who are making changes. Do you Tweet about their work or set up a Facebook Fan Page?”

No . . . even that would be far too limiting. The smart cyber-amazons I know don’t just chose one path. They do it all.

Other Butterfly Effect posts on girls and technology that may inform and inspire you (particularly when planning International Women’s Day events at your home or school) include:

And my 3-part series on cyber world: