The article below originally appeared in Notebook Magazine, November 2009. It has has been reproduced here with their permission. Visit Notebook magazine – www.notebookmagazine.com

In the minds of many parents, a daughter’s teenage years loom like a trial by fire. Cracking the code to adolescent girlhood might seem unachievable, but as Donna Reeves discovers, it all starts with facing up to who you are.

No-one has ever said raising children is easy. While there is a general understanding the early years are tough – sleepless nights, tears, the dreariness of endless laundry – there is a certain terror that fills the hearts of many parents when they come to the realisation their beautiful baby daughters will one day develop into those slightly alien and scary creatures: teenage girls.

All legs and arms and attitude, there is something about teenage girls that induces fear into the most confident of parents. But it doesn’t have to be this way. Behind the prickly, and pimply, surface of adolescent girls lies a genuine psychological and emotional need to remain connected to their parents as they face the challenges of becoming young women. Being afraid of stepping on teenage toes, or believing that adolescence is akin to the lost years, isn’t doing your kids any favours. Instead of setting yourself up to fail, parents, particularly mothers, can grow with their daughters because when it comes down to it, both are facing similar issues.

“There has been this idea that teenage girls are somehow unruly and bitches and divas and difficult; that it’s this awful tumultuous time and the best we can do is bunker down and try and get through it,” says Dannielle Miller, a former high school teacher who has worked with thousands of teenage girls in both Australia and New Zealand. “This is such a ridiculous notion because it sets up this defeatist attitude towards connecting with your daughter and it also sets up conflict because you start to see the conflict as inevitable. It becomes a self-fulfilling prophecy.

“The greatest gift a mum can give to her daughter is to grow with her and to be honest about that journey of growth. If we pretend we all just emerge as this completely whole woman, we’re doing them a disservice by not helping them understand that making mistakes is just part of that journey.”

Dannielle’s book The Butterfly Effect – A Positive New Approach to Raising Happy, Confident Teen Girls (Random House, $34.95) has just been published. It is well researched and documents with clarity and gritty honesty the issues facing today’s teenage girls, such as drinking, body issues, friendship and sex. 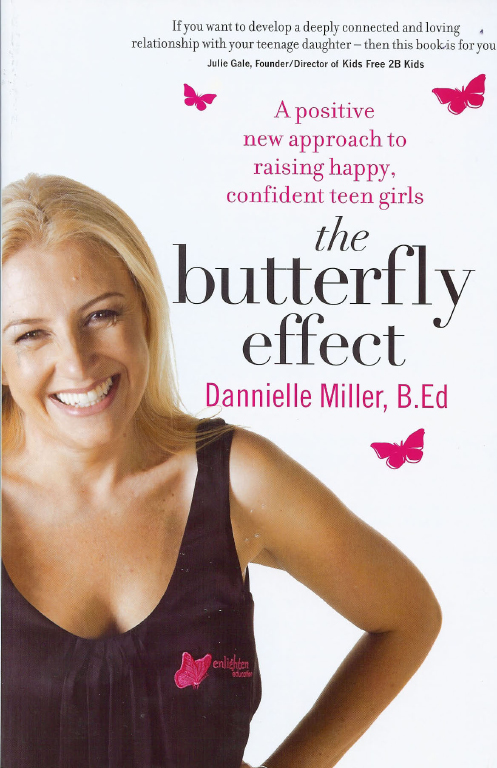 “Sometimes I think other parenting books make the world in which teenage girls live seem so foreign to our world that as an adult, you feel a little bit out of your element in knowing how to step in and help,” Dannielle says. “Yet, the issues really are the same. They might be drinking Breezers while we’re drinking chardies, and they might be watching ‘Gossip Girl’ while we’re watching ‘Desperate Housewives’, but the messages and the reasons why we’re engaging in those things are very similar. If you can start to see the similarities, rather than just the differences, I think it’s a great opportunity to connect with your daughter rather than disconnect from her.”

The Butterfly Effect offers practical advice to parents – in particular mothers – on how to stay connected, or rebuild relationships with their daughters during adolescence. Unlike some other parenting books, where the emphasis is on the child, this book forces parents to examine their own lives and behaviours. It’s an approach Dannielle says she has been using successfully for many years.

“Parents honestly think they’re going to come along to one of my seminars and I am going to sort out their daughter for them, as if she’s the one who needs fixing,” Dannielle says. “Then, within about five minutes of me speaking, I’ll see these little tears rolling down their faces as they realise they need to have a look at what they’re doing in their life. Maybe they’re always on a diet, or lamenting the ageing process, or caught up in a destructive relationship and drinking themselves into a stupor every night. Their daughters see this and that’s the truth of it. Many mothers find it quite confronting, and it is.”

Dannielle says what initially struck her when talking to mothers about their daughters was that they were both facing similar issues. “I was quite surprised that in many ways, despite all the rhetoric about there being this huge generation gap, so many issues that impact on our daughters’ lives really impact on us as women too, and we are really more alike than we are different.

“I noticed in the mothers’ faces that I was really speaking to them as well: they were caught up in the same vortex when it came to things like body image, beauty and drinking. Even when I would talk about things such as managing healthy friendships, the mothers would say, ‘It sounds like you’re describing my friendships with my girlfriends now.’”

One of Dannielle’s key messages in her book and seminars is that mothers have to set a good example and be a positive role model for their daughters. “Girls can’t be what they can’t see,” she says. “If we’re serious about saying to our daughters, ‘I want you to be really sure of yourself, to be really strong, to know how to set boundaries with people, to make healthy choices around alcohol,’ then we have to make those choices and decisions ourselves.”

If there’s one area in recent years that teenage girls have been drastically misunderstood, and perhaps as a result, let down, it’s in the assumption they are more mature than adolescent boys and therefore more independent. Dannielle says that while it is true teen girls do have more maturity than adolescent boys of the same age, they are still emotionally needy.

“The latest research is showing that adolescent girls have the emotional needs for affection and for love as they had when they were seven,” she says. “The first time I heard this, my daughter was seven and I thought about the number of times she might be touched, cuddled, told she’s beautiful. Sadly, by the time girls hit adolescence, and because they’re gangly and look a little bit grown up, we almost leave them to fend for themselves. That’s why they hunt in packs and why their peer groups are so important to them. It’s often the only place where they get that love and affection. It explains why you will always see teenage girls touching each others’ hair, tickling each other, laying all over each other. It’s because they yearn to be touched and to be loved.” 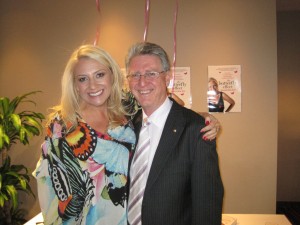 Wanting to be loved doesn’t necessarily mean wanting to be best friends. It’s important to set realistic expectations around your relationships. As Dannielle says, you have to understand that for teen girls, pulling away and coming back and then pulling away again is a really important part of them growing into individuals and becoming independent. This seesawing behaviour can’t be taken personally, or else every mother would spend a lot of her teenage daughters’ years feeling offended or hurt.

“In an effort to connect with your daughter, I don’t think it works for mums to say ‘Alright, we’re going to have these big outings every month,’” says Dannielle. “You can’t force it. Sometimes, the best moments can be when you gently brush past each other in the house, or when you write your daughter a note for her lunch box which she doesn’t even bother acknowledging.

“We need to realise these moments we have with them, even if we think they’re not important, can be hugely important. Often we make the mistake of thinking it has to be a big gesture. It is very true that teenage girls don’t want to hang with Mum all the time, but they do really want a connection.”

One of the simplest pieces of advice Dannielle gives in her book – and interestingly, one of the most powerful – is for mothers to let themselves fall in love with their daughters again. Sure, motherhood isn’t easy, but neither is growing up. Think back to how you were as a teenager and the grief you caused your mother.

“As mothers, if we can get back to the core values of ‘I do love this girl’ and realise our daughters have remarkable qualities and focus on those, rather than try to control them, then that can be a good way of finding mutual ground,” says Dannielle.

“If you can get the parenting bits right and focus on being a good role model, there’s nothing more fun than having a teenage girl around. It is their flaws and their little idiosyncrasies, and the fact they are so brutally honest that makes them incredibly endearing. They’re like big labrador puppies – they’re delightful.”

I will be presenting a public seminar for parents on raising girls at Monte Sant’ Angelo Mercy College – November 11th 2009: this is being hosted by the organisation Young Love. All enquiries should be made directly to them.

Flyer with details may be downloaded here.