The following is a reprint of an article written by Rachel Power for the June 2010 issue of the magazine published by the Australian Education Union (Victorian Branch). It is reprinted here with their permission. It may also be downloaded in its original format as a PDF to share with colleagues: News_4_feminism

Boys’ struggles in the classroom have dominated education policy for a decade. But it has it been at the expense of girls? Rachel Power investigates the return of feminism in education.

BOYS have been the focus of attention when it comes to literacy and gender issues in recent times. Meanwhile, girls have been “silently imploding”, educator Danielle Miller warns.

“Boys tend to explode, and so they draw lots of attention to themselves,” she says. “Girls implode. The statistics on eating disorders, binge drinking and self harm are starting to filter through now and I think this has put girls back on the radar big time.”

Miller, CEO of Enlighten Education and a former secondary teacher, is one of a number of women in education attempting to address some of these issues.

AEU women’s officer Barb Jennings agrees that the recent focus on boys’ failure to thrive in the classroom has led to a paucity of resources for programs and strategies directed at girls.

The exception is the issue of girls and body image, which has gained increasing attention. A 2008 AEU survey of female members found over 90% indicating they were either “very concerned” or “moderately concerned” about girls and women with body image difficulties, eating disorders, self esteem concerns or who were self-harming.

High numbers reported the issues as prevalent in their own school communities and at all levels of schooling, even preschool.

Miller is deeply concerned about the sexualisa- tion of children in the media and its impact on their mental health.

For young women, the ultimate glass ceiling has become the bedroom mirror, she says.

“Behind the facade of success — academically, socially and on the sporting field — our girls are in trouble. Girls exist in a subtle, insidious world created by marketing hype, peer pressure and unrealistic self-expectation, and it is poisoning them at a most vulnerable age.”

Since 2003, the national Enlighten Education program has gone from having “three or four clients to literally hundreds” — mainly secondary schools looking for a way to address body image and self-esteem issues and enhance outcomes among their female students.

Miller says parents and teachers are increasingly aware that the “sexed-up lifestyle” being marketed to children is having a devastating impact — on all young people, but girls in particular.

She wants to give girls the tools to critically evaluate the messages that bombard them every day and develop ways of responding intelligently and objectively. Enlighten Education delivers workshops for girls on everything from time management and coping with stress, to safe partying and maintaining positive friendships.

Among those contacting Enlighten Education for help are schools confronting a rise in inappropriate behaviour among their female students, with several reporting that Mondays are spent “cleaning up the carnage” of what happened on the weekend.

Welfare officer Fiona Isles was one such client, seeking a strategy for dealing with bitchy behaviour among female students in her region. “There were concerns from teaching staff about the types of behaviour they were seeing, particularly exclusion [of peers],” says Fiona, former wellbeing officer for the Portland Education Network. “It’s mainly in the playground, but of course that filters back in to the classroom.”

Enlighten Education offered what she wanted: a program that would help the students develop conflict resolution skills, as well as celebrate what it means to be a girl. Over the past three years, 180 Grade 6 girls from the town’s three main primary schools and the shire’s smaller rural schools have come together to take part.

“There was a lot to organise and some schools were less receptive than others about the whole ‘girls’ thing’,” Fiona says. “But to see the girls so receptive and willing to listen and share their thoughts was so brilliant.”

Its success has reinforced her belief in the need for programs that nurture girls and create a bond between them, without the pressure to “show off” for the boys, she says.

Fiona has since devised a program called “Power Girls” for her Grade 3/4 students at Baimbridge College in Hamilton, based on resources gathered while working for the Education Department.

“We ask them to develop their own image of what a Power Girl would be,” she says. “Girls can be passive and worried about hurting someone’s feelings. So we teach them how to be assertive without being aggressive, how to stand up for themselves and have a voice.”

Other educators are taking it one step further and introducing their students to the “F” word.

Teacher Anna Treasure’s “intuition” told her that the female students at Point Cook Secondary College were “starved” of information about feminism.

With the Year 12s away on a special study camp, and “teachers throwing up a whole lot of ideas for workshops they wanted to do”, Anna took the opportunity to trial a women’s studies program with small groups of Year 10/11 girls over three days.

The school’s 2009 student opinion survey had shown a negative self-perception among the Year 11 girls when it came to the differences between themselves and their male peers.

“It’s a new school in a new area — there’s nothing else here — so the playground becomes a kind of theatre, with everyone on show.”

While students study health and sexuality — and sometimes look at texts from a feminist perspective as part of English lessons — there is no dedicated gender studies program at the school.

In fact, South Australia is now the only state that offers Women’s Studies among its Year 12 elective subjects.

Anna drew on various resources to create her program but “pre-empted all of this (by saying) how much I love men,” she says. “I have five brothers, and male colleagues and a partner who are all great.”

She used psychologist Martin Seligman’s three primary conditions for happiness — feeling that you can “be yourself”; fulfilling work; and a strong relationship with a significant other — as a starting point to look at why each of these prerequisites was compromised for women of previous generations.

She also used material from the Miss G project, a Canadian gender studies organisation, to create a multiple-choice quiz and a timeline exercise. “When they had to work out which events happened a long time ago and what happened more recently, they flipped out!” Anna says. “They couldn’t believe that homosexuality was still considered a disease until the 1990s, or that pay disparity still exists.”

Her final activity was to present the girls with two images, one of a woman in a full-length burqha and one of women in a beauty pageant, and ask them to discuss “who was more free”.

She says the girls developed a whole new sense of history and their place in it. “So when they arc up about doing their work, it’s now in the context of women’s struggle for equal education!”

Where to for feminism?

Author Monica Dux isn’t worried that your average teenage girl is still wary of describing herself as a feminist.

How to give young women a new way of using the term was the central motive for her latest book, The Great Feminist Denial, co-authored with Zora Simic.

“I don’t think a 17-year-old girl needs to be calling herself a feminist,” says Dux. “If you educate 14–17 year old girls that ‘This is feminism’, it’s like leading a horse to water. Many of the challenges that will sharpen their sense of gender injustice still lie ahead.”

She believes that feminism has in many ways been the victim of its own success. “It’s easy to see how the marrying of the sexual revolution and increasing body obsession has diluted empower- ment messages and created this fallout of ‘raunch culture’.”

But if young women are given a sense of their legacy, they will be more likely to recognise the value of feminism later in life, she says.

“A feminist consciousness is often there; it’s just having an opportunity to articulate it. If you don’t have that awareness, when you come to certain moments in your life where you think something’s wrong or unequal, you’re not going to identify with feminism.”

When surveying young women, Dux and Simic found that most were alienated from feminism by distorted stereotypes created by its detractors, such as former PM John Howard. That makes it all the more important that feminist history now be part of the national curriculum, says Dux. “It is really important to educate young people about the massive impact that feminists have had on so many aspects of our lives — culturally, socially and politically. It’s not a marginal aspect of history; it’s about the way we all work and live.” 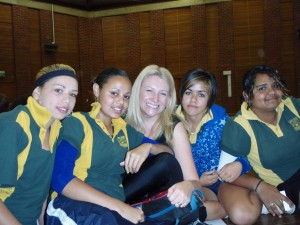 Miller finds that while girls initially feel disconnected from feminism, their attitudes change once they realise there is diversity of appearance and opinion within the women’s movement.

“We need to bring it to this generation in a way that’s more palatable. They can still like fashion and boys; they can still shave their legs and be a feminist.” She says the media never portrays feminism in a positive light, so educators

have to demystify feminism and make it relevant. “The adolescent female brain is driven by emotion and impulse,” says Miller.

“You have to make them see that it matters; make them passionate about it. They get really charged up once they become informed about the history of feminism and the battles still being fought.”

Dux agrees: “We’ve just got to start claiming back the label, and I think standing up and arguing against all the misconceptions about feminists and feminism is one of the keys to achieving this.”

2 thoughts on “Putting Girls Issues Back On The Radar”