I have been expressing concern over music and music videos that demean women for some time. Back in 2008 in a post “Claim back the music” I questioned the growing trend towards lyrical sexism and misogyny:

I went so far as to call on radio stations to devote a day to music that portrays women in a positive light:

Five years ago if you had suggested we needed Earth Hour, an hour where we all turned off the lights to remind ourselves to be mindful of power consumption and our impact on the planet, you would have been thought a radical environmental extremist. Yet as things literally heated up, the lights all went out. How much hotter do things need to get on our airwaves and on our TV sets? I suspect society will also agree we have now indeed reached tipping point and will embrace a day that seeks to claim back the music.

Smart radio stations will jump on board. Overseas, special days devoted to the positive portrayal of women in music have pushed radio stations ratings through the roof…

And as companies madly chase the female dollar, surely keeping women happy and showing them, and their daughters, respect can only be a smart and strategic marketing move?

Sadly, rather than noting change what I have noted is just how mainstream hypersexual imagery in music has now become. Case in point? At the Australian Small Business Champion Awards held in November last year, where Enlighten were Finalists for Educational Services Business of the Year, the entertainment was a Gaga tribute band. You may recall me questioning Gaga in my previous post Lady Gaga’s Toxic Mess:

(in her film clip for “Telephone”) Lady Gaga gets thrown in a sadomasochistic-porn-fantasy version of a women’s prison; there is violence, sexual intimidation, graphic tongue kissing, cigarettes, and barely any clothes. Then her lover Beyonce bails her out so they can go on a killing spree, murdering multiple people, most of them strangers, by poisoning them. They look like they’re having a great time. They drive off into the sunset. Think “Thelma and Louise” but drained of all meaning and instead filled with product placement for mobile phones, sunglasses and other branded gear you may soon be expecting teen girls to start asking for.

A snapshot of how women are portrayed in the musical charts at the moment also proves I am right to remain concerned. Number one on the iTunes charts is the song “Dirty Talk” by Wynter Gordon. She repeatedly tells us she is no angel, wants to “fight through the night” and likes it “hard-core”:

Legs up, on the bar,

in the back of your car,

can you make me scream

In case you’re not familiar with the terminology, “cherry pop tag team” is a reference to her wanting to have sex with many partners – one after the other. One assumes she’d prefer this to happen whilst being made to scream.

Cause I may be bad, but I’m perfectly good at it

Sex in the air, I don’t care, I love the smell of it

Sticks and stones may break my bones

But chains and whips excite me

I appreciate that sadomasochism does not predispose those aroused by it to participating in or enjoying violent acts outside the metaphoric bedroom – yet I can’t help but wonder if the young fans get the distinction. Surely mainstream exposure to lyrics like this, sung by artists they admire, make it more challenging for them to distinguish what is acceptable in a relationship? As I cited in my recent post Because We’re Worth More, the most recent national data shows that one in three women has experienced physical violence since the age of 15, nearly one in five women has experienced sexual assault since the age of 15 and almost every week, one woman is killed by her current or former partner.

The reality is not very sexy or song-worthy is it?

Meanwhile HipHopConnection.com has leaked a video teaser for the Kanye West hit song “Monster.” The teams at Adios Barbie and Collective Shout gave me the heads-up on this one. So alarmed were they by the scenes of eroticised violence against women that they have put together a petition to ask for it not to be released here. They explain why it is so disturbing. 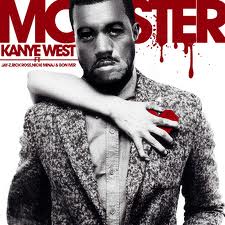 In just 30 seconds, viewers take in image after image of eroticized violence against women:

– Dead women, clad in lingerie, hang by chains around their necks.

– West makes sexual moves toward dead or drugged women propped up in a bed.

– A naked dead or drugged woman lays sprawled on a sofa.

If that’s not enough, a behind-the-scenes clip of the video includes a semi-naked dead woman laying spread eagled on a table in front of Rick Ross as he eats a plate of raw meat. It is likely we can expect more brutal images in the full-length video.

The victims in this video are clearly women. Only women. And the men, Kanye West, Rick Ross, and Jay-Z, are far from bothered by the female corpses. They seem to enjoy being surrounded by lifeless female bodies, apparent victims of a serial killing.

The official release date of the full-length video has not yet been announced. Let’s make it clear to Universal Music Group, the controlling company of West’s record label, Roc-A-Fella Records, and MTV that the music industry’s portrayals of women’s pain, suffering, abuse, objectification, and victimization as valid forms of entertainment are not acceptable.

We call on Universal Music Group and MTV to combat violence against women by refusing to support, promote, and/or give airtime to West’s “Monster” video.

I urge all my readers to sign this petition too. It will take less than a minute.