Further to last week’s post on an alarming new type of lewd cyber scavenger hunt, I thought I’d share this Opinion piece by author, columnist, journalist, semi-retired academic and social commentator, Dr Karen Brooks. It was first published by The Courier Mail and is reproduced here with the authors permission. I was pleased to have contributed to to the discussion. 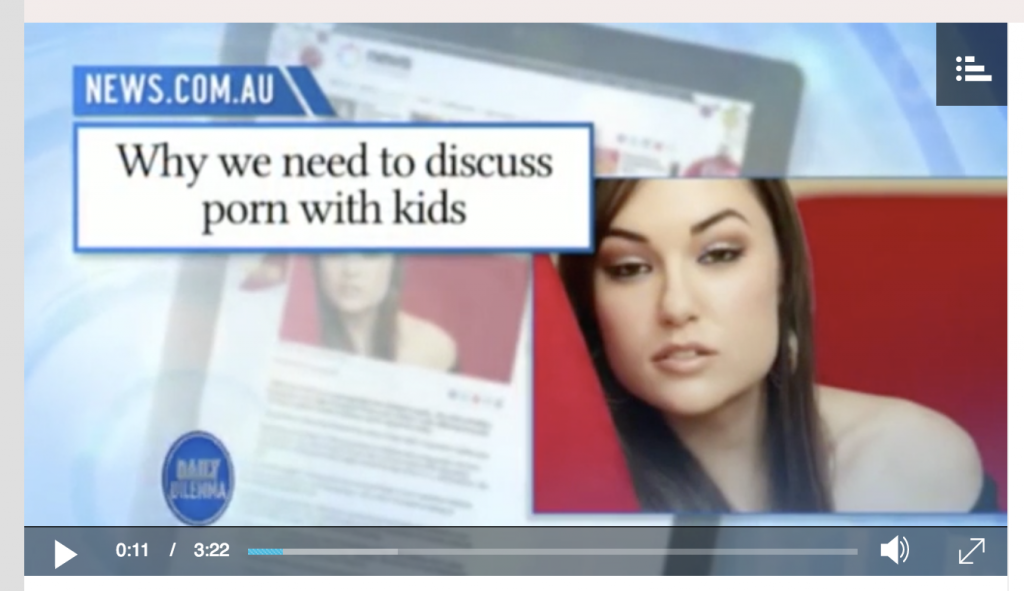 According to the Australian Bureau of Statistics, over 40 per cent of all sexual assaults in Queensland are perpetrated by school-age children, while the number of young people under 19 committing sex crimes in Australia has almost doubled in five years; 770 are under the age of 15.

Experts believe the shocking increase can be attributed to easy access to online pornography, which is giving young people distorted and unhealthy ideas about sex and relationships.

In the past, for a child to sneak a peek at an adult magazine or movie was risky. These days, all young people need is a smartphone and that world is theirs. Only, it’s changed: it’s more graphic, demeaning, sadistic and brutal — especially towards women.

Kids are copying the sexual behaviours they’re viewing — whether the exposure has been accidental, involuntary or deliberate (for example, an older person showing them) — and at a time when they’re naturally curious and wanting to experiment with their sexuality, to test the boundaries.

As a result, they’re developing toxic relationships with sex, their bodies, and each other.

But it’s not only through pornography they’re being exposed to warped ideas about sex. Popular culture inundates them daily (through music, fashion, ads, movies, TV etc), and the idea that sex sells — even acceptance from peers.

When well-known celebrities, such as the Kardashians, Katy Perry, and Madonna willingly share naked pictures of themselves, claiming they’re aspirational, for a political cause or to self-promote, or US congressmen send “dick pics” as a form of flirting, is it any wonder the kids are baffled and the lines between sexuality, acceptability, and pornography are being blurred?

For young people, sending a naked selfie/sexting, has virtually become part of contemporary courtship/friendship and even a rite of sexual passage.

Yet, not only are we seeing confusion around issues of consent and privacy with this, but a growth in predatory behaviours, where young men especially bully and blackmail girls into sending nude pictures, and the girls, believing it’s a way to be noticed and liked, acquiesce.

What often happens is that trust is broken and the image is shown to a wider audience and slut-shaming occurs. The consequences of this can be personally and publicly devastating.

Not only can a young person’s reputation be shredded, the image left in cyberspace in perpetuity, but both the sender and recipient can find themselves facing criminal charges and labelled “sex offenders” (even if what they’ve done is consensual), because they’ve made and distributed child pornography.

So, what are we, as parents, adults, as a society, to do about these and the invidious effect they’re having on young people’s digital and real identities?

Firstly, it’s important to understand and accept that young people exploring their sexuality is perfectly natural and normal.

Sexting has become one of the ways to do this.

In a harrowing article in Qweekend, Frances Whiting cites Detective Inspector Jon Rouse of the Queensland-based Argos Taskforce, who reminds us, “We are not dealing with criminals, what we are dealing with is innocence, naivety, sexual exploration, and using technology to do that.’’

The “Young People and Sexting in Australia Report” (2013), states we need to “recognise that sexting can be an expression of intimacy… Framing sexual expression only as a risk does little to alleviate anxieties or feelings of shame that young people may experience in relation to their sexualities.”

Dannielle Miller, author and CEO of Enlighten Education, who works with thousands of young people across the country, agrees. She warns against moral panic and shaming. She also knows the abstinence approach — with sexuality and technology — doesn’t work.

She argues, “We urgently need to teach all young people about what respectful relationships look, sound and feel like.”

But when we provide them with very little in terms of “relevant, engaging relationships’ education”, we fail them.

We need to rethink sex education, at home and schools, and focus on intimacy, emotions; how we feel as opposed to what (not) to do. We need to have frank discussions about power, control and how pop culture exploits our sexual insecurities as well as entertains. How technology can be both positive and misused — the choice is ours.

But when the adults in a young person’s life and the popular culture in which they’re submerged can’t role-model healthy relationships, with each other, sexuality or technology, then how can we possibly expect our kids to have them?

Rouse says there’s only so much authorities can do. He warns parents, “you’re paying for these devices (phones etc), you’re providing these devices… take some responsibility for what’s happening on them… it’s not an invasion of their privacy, it’s parenting.”

It’s time we step up.