Last night on ABC’s Q&A Janet Albrechtsen made the following statement on the state of feminism amongst our young women:

A few days ago at a Sydney girls’ high school, the girls were asked whether they were feminists. Of 90 girls, 30 girls put their hands up. Now, I think that’s quite unfortunate. These are girls who are obviously in favour of female suffrage. They’re in favour of equal pay and yet there is something going on here that a lot of young girls are not finding feminism attractive. The debates around quotas and discrimination are all part of a wider debate about feminism and we have to ask what it is that’s turning young girls away…

I’m not sure that I agree with Ms Albrechtsen’s assumption that this generation of girls are fleeing from feminism. Rather, I think they have a healthy interest in women’s issues, even if they do not necessarily relate to the terminology. Monica Dux, author of The Great Feminist Denial, argued in an article I was also interviewed for (“Putting Girls Issues Back On The Radar”) that a feminist consciousness is there but that we have just got to start claiming back the label.

And make no mistake, it is vital that we connect this generation of young women to the feminist agenda as the work is far from done.

Despite making up 45% of our workforce, the number of women on corporate boards is just 8.3% (an issue the Q & A panellists also discussed at length). Violence against women is a huge issue: one in three women has experienced physical violence since the age of 15; nearly one in five women has experienced sexual assault since the age of 15; and almost every week, one woman is killed by her current or former partner. One need only look at popular culture to see that misogyny and sexism are not only alive but indeed well paid (think footballers who choose to behave badly and Charlie Sheen). Meanwhile, for our sisters overseas, every day is an ongoing battle. The following extract from REFUGEES magazine, produced by the Office of the United Nations High Commissioner for Refugees, is deeply shocking:

There are approximately 50 million uprooted people around the world – refugees who have sought safety in another country and people displaced within their own country. Between 75-80 per cent of them are women and children.

Females are subjected to widespread sexual abuse. In Bosnia and Rwanda rape became a deliberate aim of war. More than 20,000 Muslim women were raped in Bosnia in a single year, 1992, and a great majority of the female survivors of Rwanda’s 1994 genocide were assaulted.

More than 300,000 youngsters, many of them female refugees, are currently serving as child soldiers around the world. The girls are often forced into different forms of sexual slavery.

More than 16.4 million women today have HIV/AIDS and in the last few years the percentage of women infected has risen from 41 to 47 per cent of the affected population. In sub-Saharan Africa, teenage girls are five times more likely to be infected than boys.

The majority of trafficked people are women, especially those bound for the world’s sex industries. Females are particularly vulnerable to trafficking because many have little individual security, economic opportunity or property or land ownership. Many victims are kidnapped or sold into slavery by their own families.

An estimated 1.3 billion people worldwide, 70 per cent of them women, live in absolute poverty on less than $1 a day.

The team here at Enlighten Education also investigated some of the reasons why young women are distancing themselves from the “F” word when designing our newest workshop aimed at inspiring girls to be proud Feminists – Real Girl Power. Some girls thought the work was done: “We have a female Prime Minister and a female Governor General.” Others thought that only those with “hairy legs” and those who hated men could join the club. Kate Ellis, our Minister for Employment Participation, Child Care and Status of Women, hinted at the latter misconception too when she revealed on Q & A that when she first entered politics she was advised to cut her hair and wear glasses (despite having perfect vision). Can we be taken seriously as female leaders, and indeed as feminists, if we have long hair, stilettos and wear lippy?

We do not owe it to feminism to dress down. Nor, of course, should we feel pressured to dress up. Feminism surely must be about informed choice.

Sarah Casey, a friend and colleague, is currently completing her PhD at Griffith University. Her focus is on the relevance of feminism to the world today. Sarah argues that feminism will be revived for mainstream audiences through action rather than continual academic dialogue, which is often inaccessible to the majority of youth. “I believe that human rights violations against women throughout the world need to be addressed with urgency and focussed feminist organisation that takes into account and critiques youth culture. For example, we must tap into and explore new technologies, celebrity consumer culture and philanthropic capitalism,” writes Sarah.

In our work, we have discovered  that  when we inform girls about some of the struggles women are enduring in the third world, they soon realise that the feminist battles have not all been fought. A Western woman’s experience is vastly different to that of a woman in the developing world.  We remind girls that not only are they privileged to have choices, but that they also have powerful voices they may chose to use to effect global change. Sites like The Girl Effect and Plan International’s Because I Am A Girl are both great starting points and offer not only education but also practical ways in which we can all contribute to making a difference.

We also encourage girls to act on issues that do affect them directly. We distribute “Girl Caught” stickers (you may download a PDF with these stickers here: GirlCaught Stickers(2009)) inspired by the US Mind on The Media campaign that encourages girls to talk back to advertisers who portray women in a negative light. To say girls love these would be an understatement – every time we hand these out at school girls try to sneak extra copies from us! 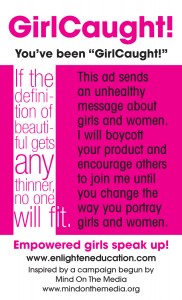 We are now also distributing The Equality Rights Alliance’s postcards calling on The Hon Peter Garrett (Minister for School Education, Early Childhood and Youth) to put the Voluntary Industry Code of Conduct for Body Image into force. An electronic version of this card may be sent from here.

I’d love to hear how you are connecting the young women at your school to feminism too.

Postscript: Thank you to Rachel Hanson for bringing this excellent TED Talk to my attention. Here young feminist Courtney Martin ( author of the insightful Perfect Girls, Starving Daughters) gives a personal account of how she reinvented feminism and connected with the movement.