Have the PCD’s (The Pussycat Dolls) stooped to a new low?  I was watching the film clip to their song “I Hate This Part Right Here” when I was stunned by the scene depicting one of the girls draped in a very suggestive “come and get me” pose over a pinball machine. This appears in a film clip set in the desert (it’s all lone roads, cacti, wolves and deers up to this point) which made the shot all the more bewildering. It’s about 2min 30 in:

The first thing that came to my mind was that this was designed to be reminiscent of the infamous gang rape scene in the Jodie Foster film The Accused – a scene in which Foster’s character is gang raped on a pinball machine in a small-town bar. This scene was absolutely harrowing and had me, like so many other cinema goers, leaving the cinema sobbing.

Am I reading too much into this? And if I am, what else are we to make of a pinball machine in the desert decorated by a panting Pussycat Doll?

Glorifying violence against women is sadly not new. Dolce and Gabbana alluded to gang rape in their 2007 advertising campaign:

And what about the episode of America’s Next Top Super Model that featured the wannabe models posing for shots that depicted them as victims of violent crime? 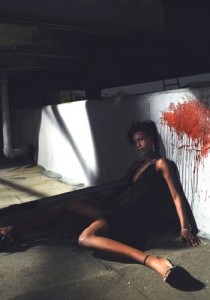 Loved blogger Venice of Brasil’s post on why we should all be vigilant against any attempt to eroticise violence against women:

It also seems like just one more crime the beauty industry commits against women. This is not a place where women are celebrated. They are scrutinized, demeaned, told they are too old, not thin enough, not pretty enough, etc. just to sell more products. Top Model sells at least one new product an episode through its format. I am sure that this is just another publicity stunt for the show in which media people and feminists get upset, and the majority of the desensitized public sits back thinking, “what’s the big deal?”

4 thoughts on “I hate this part right here”