Skip to content
The time for token gestures and endless discussions about the physical, emotional psychological and financial costs of violence against women and the impact this has on individuals, families and communities has long passed.

In Australia, one woman every week dies at the hands of her partner. According to Our Watch, a not for profit organisation aiming to engage the community in action to prevent violence against women and their children, the combined health, administration and social welfare costs of violence against women is estimated to be $21.7 billion a year.

We must seek out new, creative ways forward.

And we must start walking the talk.

Women’s Community Shelters sees first-hand the pain and wasted potential behind the much-discussed family violence statistics. Since 2013 they have established six shelters in NSW and accommodate up to 100 women and children fleeing violence every night.

Yet they’re desperate to make their services redundant.

CEO Annabelle Daniel says: “Make no mistake, we are a vital service, but we’d like nothing more than to be able to eventually close our doors. We want to demonstrate that building capacity and providing education at the local level, and providing a practical application for this learning, will work to reduce domestic violence, provide channels for early intervention, and enhance crisis outcomes for local women and children.”

To this end, WCS have now entrusted me to launch their new education initiative, Walk The Talk, which is based on a pilot project I first ran in 2015 as a pro-bono board member for my local women’s refuge.

Phase one of the program involves my Enlighten Education team speaking to high school students about respectful relationships, teaching them conflict resolution skills, and inspiring them to be change makers. No lecturing. No scaremongering. Rather, it’s a strength-focused, inclusive program for both genders filled with laughter and connection.

The initial education component is then followed up with an opportunity for students to practically apply their learning; they are invited to adopt their local refuge.

Young people will support the work of these shelters through helping with fund-raising, assisting with raising community awareness, and volunteering at key events.

Capture their hearts and their minds, and hands will follow.

Already 12 schools (Catholic, independent and government) have committed to participating.

The 187 teens we launched the program with earlier this week in North West Sydney could not wait to “walk the talk” and put everything they learnt with my team into action by brainstorming ways in which they could help their local refuge, The Sanctuary.

I was particularly touched by the 15-year-old young man who was keen to call his Nanna.

He said: “She really does the best knitting. I know she’d knit blankets and toys for us. I can talk to her tonight?”

Then there were the groups who excitedly brainstormed possibilities ranging from the practical (setting up a box at the canteen so everyone can put their change in it) to the creative (painting art works for the women to take with them when they transition out and into their own new homes).

Their Year Advisor and I were both almost in tears of pride and possibility.

Statistically, we were well aware that within this cohort there will be kids who are currently directly affected by domestic violence; this was an opportunity to help reduce the stigma surrounding this, and an exercise that helped give them back a sense of their own agency.

I was heartened too by the young teen girl who told me she was going home tonight to teach her little sister everything she learned: “We need to pass these empowering messages on! We can solve hard problems!”

Yes. You can. As an educator who has spent almost 30 years teaching teens, I’ve always believed that if engaged in the right way, young people can (and will) change the world.

So when the teens who decided they wanted to build a vegetable garden to sell the produce questioned me on how helpful this might be as it would take a long time for their crop to grow, I smiled and reassured them they should simply go ahead and plant the seeds.

This article was first published by The Daily Telegraph, 22/2/19

Walk The Talk update – Phase 1, the student in-school delivery component, has now been completed to huge acclaim! I was really thrilled with the phenomenal feedback from the student participants. We have had almost 2,000 students from 15 schools complete the half-day workshop. 100% said they’d recommend it to other students, and (on average) over 97% of both boys and girls rated it as either Very Good, or Excellent! It’s safe to say they were both educated, and inspired.

Phase 2 is now happening with schools completing their own projects to assist their local refuge. We’ve already had fund raising drives including sausage sizzles and Mother’s Day stalls and large numbers of students signing up to volunteer to help at events. 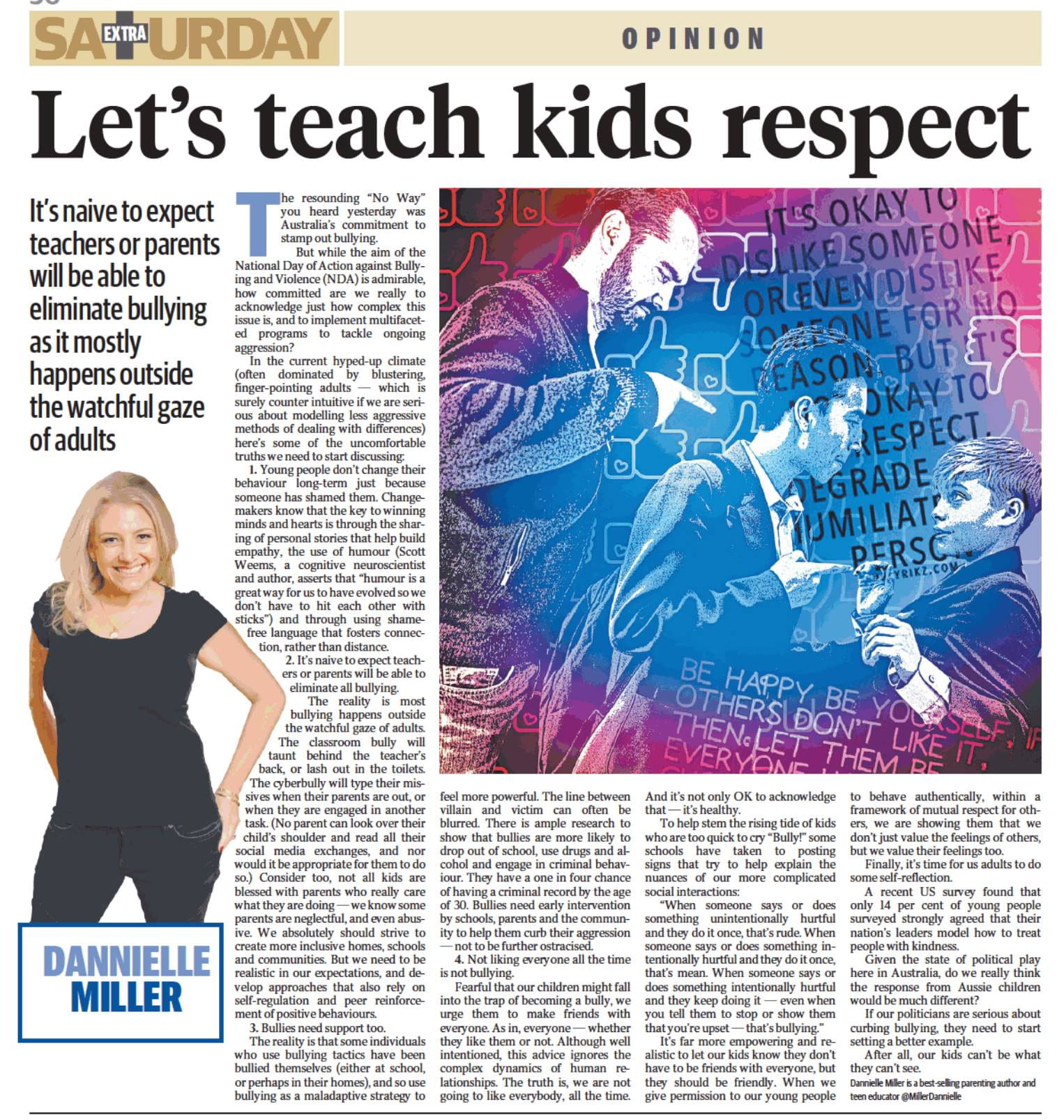