The following post was first published in the Daily Telegraph newspaper, and online at RendezView, 26/12/15.

Is it any wonder that after overeating, overspending and feeling over the in-laws, so many of us escape between Christmas and New Year to the movies?

The December holiday period is in fact one of the most lucrative for cinemas, as evidenced by the unstoppable box-office performance of Star Wars: The Force Awakens, which set a new record for worldwide ticket sales on its release.

But as much as I love tales of underdogs defeating dark forces, this Boxing Day I’ll be lining up to see a different set of fighters bravely putting their lives on the line and challenging existing power structures.

Bring on the suffragettes.

Opening in Australia today is this historical period drama Suffragette, which tells the story of the “Mothers, Daughters, Rebels” who risked everything in their battle for the vote.

It won’t necessarily be comfortable viewing. I suspect many cinemagoers may be shocked at both the plight of women in 1912 (when the film opens) and the brutality of the British government’s response to their campaign.

But how vital it is that we learn more about women’s stories; particularly considering much of what we learn at school in history is often so very male-centric.

Back when I was a high school history teacher I was frustrated at just how difficult it was to access quality resource material on the role women played in various historical periods. During wartime for example, most textbooks reduce the role of women to either waving off their sons to war, or to nursing; to narratives of motherhood and sacrifice.

In reality, female contributions were far more diverse, from women taking on traditional “men’s work” outside the home, to serving as special agents in World War 2 (Australian educated Nancy Wake became the Gestapo’s most wanted person for the work she did with the French Resistance and remains this country’s most decorated servicewoman). Why have there not been more films telling their tales?

In a recent New York Times Magazine article on sexism in cinema a top entertainment executive, who insisted on anonymity, offered an insight into why so few women’s stories, historical or otherwise, reach an audience, “ It’s a hundred-year-old business, founded by a bunch of old Jewish European men who did not hire anybody of color (sic), no women agents or executives. We’re still slow at anything but white guys’’.

Suffragette is, therefore, a rare cinematic gem as it not only sheds light on a crucial period in the history of the fight for gender equality, but has two women at the helm with both a female director and screenwriter.

So today I will grab my popcorn and head to the movies, not only to honour the memory of my suffragette sisters, but also to support the work of women in film.

Yes, we have come a long way. But it’s clear the fight continues. 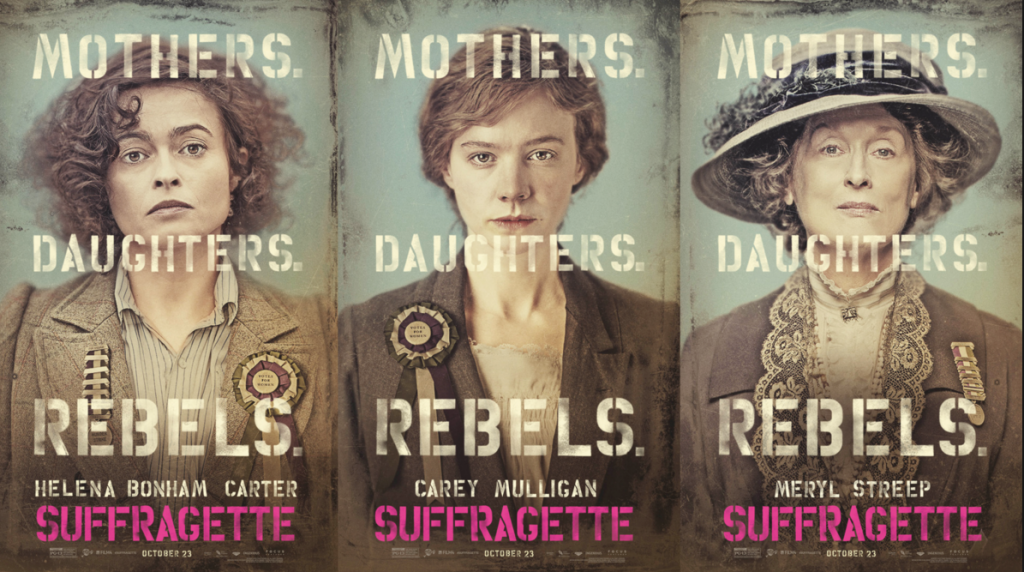