I lament the use of terms such as “liberation” and “empowerment” to sell women more and more product. In this post I want to particularly question the use of terms implying female empowerment in the growing trend to convince women to change what is surely something quintessentially female — our vaginas.

Case in point?  The latest series of advertisements for Schick Quattro’s TrimStyle all-in-one razor and bikini trimmer. The ads invite you to “celebrate your inner confidence” and, using the language of liberation, “free your skin”.  According to the company’s PR blurb,  five everyday Australian women were photographed and filmed for the campaign wearing nothing but lingerie, in and around some very public locations in Sydney’s CBD.  Men are shown gawking at them, whilst other women look on admiringly. The women do have inspiring stories — there is a single mother and a cancer survivor — yet surely as the advertisement is for a bikini razor and they are seen posed in lingerie, we can only assume that their confidence actually comes from having well-groomed vaginas. 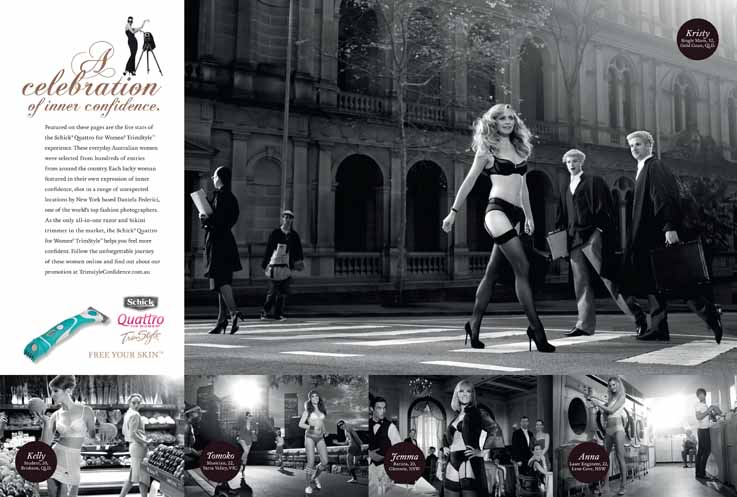 Speaking of well-groomed vaginas reminds me of one of the most flabbergasting moments in talk-show history. In January last year Jennifer Love Hewitt famously discussed on American TV that she had devoted an entire chapter of her new book on relationships to decorating her hairless vagina with jewelled decals — a practice known as “vajazzling” that is gaining in popularity here, too. Hewitt told her host “Women should vajazzle their vajayjays . . . It really helped me.” She went on to say, “After a breakup, a friend of mine Swarovski-crystalled my precious lady . . . and it shined like a disco ball.”  It really “empowered” her, she insisted  (although apparently she was not quite empowered enough to use adult terms for her anatomy).

Forget the war on terrorism — if the amount of ads for decorating, shaving, waxing and electrolysis are anything to go by, it is the age of the war on women’s vaginas.

Actually, it is not just grown women who are being told they should doubt their own genitals. During the formal season last year, beauticians noted a huge increase in the number of young women wanting “intimate” grooming treatments. Girls as young as 14 were asking for Brazilian waxes. Enlighten Education’s Program Manager for New Zealand, Rachel Hansen, who is also a women’s health and sexuality educator, tells me of a school in NZ for Year 1 to 13 students that ran a beauty salon’s ad for Brazilian waxing in the school diary. Imagine pulling out your five-year-old daughter’s homework diary and an ad for Brazilian waxing jumping out at you.

It seems teens no longer even know what “normal” is. In episode one of the UK’s 2009 Sex Education Show, when teens of both sexes were shown images of women with pubic hair, they gasped in what seemed to be shock or disgust. The producers had set out to show that in reality “we all come in all different shapes and sizes. From penises to pubes, bums to boobs whatever you’ve got it’s all perfectly normal.”

Cosmetic surgeons would have us believe otherwise. As if waxing, plucking, electrolysis and decorating is not enough, far more serious procedures are being widely promoted by surgeons as  important for restoring women’s “confidence”. Researcher Karen Roberts McNamara argues that women are going under the scalpel to have their vaginal openings tightened and their labias made smaller because they have been convinced this will “normalise” them and thus give them confidence:

The sanitized ideal of the clean, delicate, discreet vaginal slit, so widely used in the plastic surgery industry discourse, functions in such a way as to cast the bodies who have not undergone these procedures as necessarily dirty and unsightly . . . Scholars have noted that in years  past, women rarely had the opportunity to see other women’s vaginas and thus had no sense of how a typical vagina might look. Yet with the mainstreaming of the adult entertainment industry, the situation has changed dramatically. Now, a beauty standard has emerged, one established primarily through porn actresses, nude models and strippers . . . The irony of this situation is that in pornographic films and photographs, everything from eye colour or stretch marks, to genitalia, can be modified digitally.

Amanda Hess, in her excellent piece “The Problem With Defending The Sacred Choice To Vajazzle”, concludes with a call-to-arms of sorts that I am taking up, and that I urge all girls and women to take up.

For now, the more extreme performances of femininity, like breast implantation, vaginal ‘rejuvenation,’ and Vajazzling aren’t considered the norm for women. I’m not going to be met with shock when I remove my pants and reveal to my sex partner that I haven’t converted my pubic mound into a shiny disco ball. But these days, it wouldn’t be out of the ordinary for him to be shocked that I’m not perfectly waxed. The body hair ship may have sailed, but vaginal modification is at a point right now where we are still in a position to fend off the tide. And my greatest fear is that someday, we will wake to find that our girls are being routinely Vajazzled upon puberty, and realize that we never stood up to say, ‘This…is . . . ridiculous.’

10 thoughts on “Hands off our vaginas”