I am thrilled to be one of the keynote speakers in July at the conference of the Federation of Parents and Friends Associations, of the Catholic Diocese of Maitland-Newcastle, in NSW. I will be speaking on how to raise amazing girls and clinical psychologist Andrew Fuller will be talking about his area of expertise, boys. I am often asked what I believe are the greatest challenges girls face and I am also often asked “What about the boys?” So I am grateful to Aurora, the diocese’s monthly newspaper, for giving their permission to share this article in which both Andrew and I get to answer those very questions. 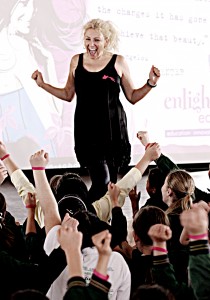 What kind of a girl were you?
Bossy. Busy. I was determined to expand my empire from ruling over my little sister to becoming “President of the Universe”—until I hit adolescence. My inner dialogue then became darker and more focused on how I looked. As I had scars (I have a third-degree burn) I became convinced my body’s “flaws” would limit my potential. How telling that, as little girls, we believe we have fantastic powers and unlimited potential, yet as older girls we start to feel powerless and see our currency as based on how we look!

It took me some time to reclaim my Presidential Powers.

What gifts do girls offer?
I find young women simply delightful! They are honest (ok, I admit at times they may be brutally honest—like the teen girl who recently asked me “So did they have make-up back when you were a teen too?”), affectionate (girls at our events will literally line up to hug and kiss me), and passionate. If you capture their hearts, their minds follow.

I think as teens, girls in particular can look so grown up and act so worldly, we forget that they truly still need our love and attention.

It’s tough raising girls—right?
There are absolutely many challenges. We know body image is a huge concern for many young women; in fact surveys have shown as many as 94% of girls say they do not think they are as beautiful as the average girl, and up to 25% say they would like to change everything about themselves.

The most problematic thing is that girls can look as though they are doing well. They are experts at putting on the “I’m all right” perfect girl façade. Yet behind bedroom doors, they may well be imploding.

The key I think to parenting girls and boys is to reach out. Read what parenting experts have to say (not just my book of course, but get lots of viewpoints so that you are informed), talk to the parents of their friends. It really does take a village to raise a child.

What is the single biggest challenge facing girls today, and how might parents address it?
I believe that despite all the progress feminism has helped women make, the ultimate glass ceiling still seems to be our bathroom mirrors. Girls caught up in playing the “compare and despair” game will not reach their personal or academic potential. Their inner dialogue will convince them that despite all they achieve, unless they can fit the increasingly narrow ideal of beauty that they are bombarded with, they will not be “worth it”.

I love the fact that healing our girls really encourages parents also to heal themselves. Girls cannot be what they cannot see. Our girls will not see themselves as whole unless we as parents see ourselves as whole too. We “big girls” need to stop engaging in toxic self-talk, lamenting the ageing process, yo-yo dieting . . . we need to step up and be role models for our daughters.

If you could give parents of girls one piece of advice, what would it be?
Don’t believe the self-fulfilling prophecy that mothers and teen daughters are destined to fight and drift apart. Don’t expect her teens to be troubled. Rather, connect with her. Enjoy her. Teens need us just as much as they did when they were toddlers! Every stage of parenting has its challenges but every stage also has joy . . . see the joy now too.

If you could give teachers of girls one piece of advice, what would it be?
See her as a whole person not just an academic candidate. Don’t dismiss her personal issues. If a teen is fighting with a friend, that matters most to her. You can forget learning until there is a resolution! It is strange to me that we never take time to explicitly teach such vital skills as resolving conflict. When we work with girls in schools they hang on our every word when we help them learn how to make sense of “Girl World”! We have a generation of young women who are being expected to cope with an increasingly complex world, yet they may only have child-like strategies to fall back on.

What kind of a boy were you?
I was quite a shy boy but very lucky. Not only did I have my parents and family, I had an aunt and uncle who owned a farm so I got to play and roam. My neighbours also adopted me and I had breakfast with them every morning until I went to secondary school.

What are the joys that boys offer?
Boys are gung ho, wild, touchy pranksters who love stories, games, jokes and mucking about. They are the masters of minimalism. If you ask them to write 50 words on something and they write 51 words, they think they have overdone it. They are the practitioners of just-in-time management which is why they will leave almost any chore to the last possible moment.

It’s tough raising boys—right?
Keep boys busy and it’s pretty straightforward. They want to know you are there for them but they don’t want you in their face. Let them know that you respect them and even though they will pretend that they don’t want to hear you, make sure that they know you love them.

What is the single biggest challenge facing boys today, and how might parents address it?
We’ve narrowed the definition of success so much that many kids, girls as well as boys, think they are failures and cannot succeed. We can be the antidote to this craziness by insisting on our children’s right to be individuals and to find success in their own ways. Be the person who turns to young people and says, “I have no idea what you are going to do with your life or how you are going to get there but I know you will be an absolute world beater.” Believe in them.

If you could give parents of boys one piece of advice, what would it be?
Mothers of boys need to know that they provide a role model for his future relationships with women. Care for sons but don’t be too ready to rescue them. Love them but expect them to solve their problems. Don’t let them wriggle out of hugs or conversations with you. Know when to “become invisible” when their friends are around but be there as a backup.

Fathers of sons need to learn to stop trying to improve their sons. If a father can accept his son for who he is and believe in him, he does more to build his confidence and self-esteem than all advice and lectures put together.

If you could give teachers of boys one piece of advice, what would it be?
Boys thrive best as part of a “gang”. The most important gang they will ever belong to is their family. The second most important gang is your classroom. Run your classroom like a gang! Have clear rules and high expectations. Be the leader of the gang. Let boys know how to succeed and they will shine. Also know that boys’ love of games and competitions overrides any lack of motivation they may feel so run your classroom like a mix between a computer game and a game show!

To learn more about Andrew Fuller, go to www.andrewfuller.com.au. To read Aurora, click here. And for more information about the Federation of Parents and Friends Associations’ July conference, call Linda McNeil on (02) 4979 1303 or email her at linda.mcneil@mn.catholic.edu.au.

One thought on “Girlworld meets the Boyzone”