My post below was originally published by The Sydney Morning Herald, 24/3/12.

If sales of the books and early movie tickets for the new teen fiction series The Hunger Games are anything to go by, it seems teen girls are starved for a heroine with real fire. Author Suzanne Collins quite literally dishes up spark with her character Katniss Everdeen; a reluctant leader of a revolution who becomes popularly known as “the girl on fire”. 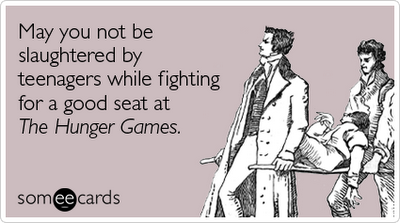 Comparisons to the wildly successful Twilight trilogy are inevitable, because the heroines in both find themselves torn between two lovers.

But this is where the comparisons should end. Bella and Katniss would have little to talk about. While Twilight’s Bella is the quintessential damsel in distress, Ms Everdeen is far more likely to protect, rather than need protecting.

After reading the trilogy, I admit I didn’t quite understand the extent of the fervour. When yearning for a female rebel, I prefer the home-grown heroine of the Tomorrow, When The War Began series, Ellie Linton, to the rather emotionally limited Katniss. And while interesting enough, the premise is not particularly original. The series is set in a post-apocalyptic North America where children are made to compete in a brutal, televised fight to the death. The world depicted is incredibly corrupt, the adults all seem absent or deeply flawed.

But it wasn’t written for me, so I’ve asked girls why it resonates with them. The New York Times attributes some of the buzz to the clever use of social media by the film’s marketers. But that alone does not explain it. The answer is more simple – girls are looking for an alternative to the limiting stereotypes our culture keeps dishing them up. And on this point, I hear them loud and clear.

Emily Maguire, feminist and author of the book for teen girls Your Skirt’s too Short, makes this striking observation about how we culturally treat young women.

“About five years ago, I found myself increasingly annoyed by the overwhelmingly negative, often completely, stupidly wrong media coverage of young people, particularly young women. As I’m sure many of you have noticed, almost everything written or screened on TV about teenage girls presents them as either sex-mad airheads or sweet, delicate flowers. Either out-of-control tarts ruining society or innocent angels being ruined by society … No wonder so many girls feel misunderstood. The version of their lives presented as news is a salacious cartoon; the characters meant to represent them are sexually loose magnets for trouble, not necessarily because they’re bad, but because they’re morally retarded and culturally illiterate.”

If the times we live in are toxic for girls – think of the huge pressures on them to be not only thin and hot but to be smart and successful; to be everything, all at once – then equally toxic is how the media and society choose to engage with young women. We lecture and lament, police and patronise. Rarely do we acknowledge that we struggle with many of the same issues our girls struggle with and many ordinary girls are doing extraordinary things and making sensible, admirable choices.

Katniss is too busy surviving to send provocative messages of herself via text, too committed to leading the revolution to engage in mean-girl gossip. If she goes hungry, it is because she cannot find food rather than because she is dieting. And she is ultimately determined to take down her society rather than let it take her down.

Girls no longer wish to be dished up sugar, spice and all things nice. Nor do they want to be offered faux empowerment via raunch culture.

So what if I found parts of the series laboured and pessimistic? These books have tapped into the real need teen girls have to be viewed as multi-dimensional and fierce and have got them thinking and talking, about leadership and loyalty.

And that’s a win

One thought on “Girls have been hungry for this revolutionary heroine”