I hate the way the term “girl power” is used to package messages for girls that are anything but empowering! Here are some of my personal “grrrrrs.” All belong straight on the Wall of Shame.

1. www.girl.com.au A web site that claims to be “Empowering Girls Worldwide.” This site is just a huge sell out. Could they push any more product if they tried? The products they do push range from the new made-for-kids film Kung Fu Panda to Bratz body spray -so surely they are pitching this site at very young girls? But wait – there’s also Brazilian waxing, a post on “man-sharing” and a feature on “being a witch in the bedroom.” Basically, ANY product or service remotely connected to girls from ages 6-60 seems ok here. Hint for the web hosters – throwing one or two articles in on bullying does not make your site “empowering.” 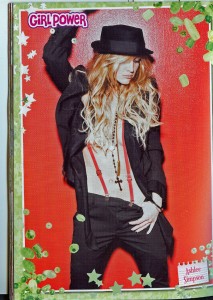 2.  “Girlpower” magazine – aimed at 7-12 year old girls. What is so empowering about the poster of Ashlee Simpson they have included for little girls to put on their bedroom walls? She is wearing no top – not even a bra, and is pulling her pants down to show more of her crotch.

Why include a “Hotness Scale” that encourages small girls to have a crush on Nick Lacey ( who is 35 years old – older than many of their fathers!) and the new star of Gossip Girl, 23 year old Chace Crawford – this show is M rated and therefore not one any of them should be watching yet! The character Chace plays is portrayed as having a drug problem and needs to be sent to rehab. Mmm…I am thinking that Jessica Simpson’s ex and a “bad boy” pot head are not ideal for my 9 year old!

Why too did the Editor choose to include this particular image of cute little Smurfette in their feature article on her? 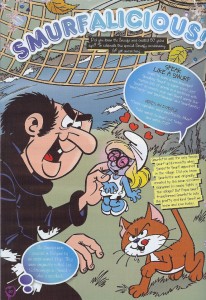 I find the image really predatory and sent the email below off to the Editor of Girlpower magazine last week:

I am a teacher and parent. I also run workshops for young girls in schools on self esteem and body image. Amongst other things, we encourage girls to critique the media and deconstruct images that are presented to them.

I am confused by your choice of images for the feature story on Smurfette in this month’s issue of Girlpower (page 60).

Smurfette has been captured. She is being leered at by the older male character and his cat – both clearly look as though they want to hurt her. Yet Smurfette looks at the older man lovingly – she looks like she is enjoying being preyed upon. Out of the all the images of Smurfette you could have used I find this choice really puzzling and am hoping you can explain what it is meant to be / represent? It may be a part of a storyline but the story (and the outcome of this bizarre encounter) are not explained at all in the article and all readers have is this one picture to try to make sense of. I have asked my two children (6 and 9) to explain what they think it means – both have said it is REALLY scary “because the old man is evil and he is going to kill her” and that Smurfette “must love to be hurt.”

Not a very empowering message for children is it? Certainly this is not an image that could in any way be said to contribute to “girl power”.

I will appreciate your feedback.

I haven’t heard back yet.

Why has raunch culture become confused with empowerment? A recent music review I read described girl power bands as being those that “are all about hitting women with a dose of female empowerment, but without any danger of alienating the boyfriend — potential or otherwise.” The reviewer, Bob Dobson, then went on to offer this very telling observation, “When watching the average girl band video she will see strong, assertive women comfortable in their sexuality, kicking a no-good boyfriend’s ass to the curb. He sees hot chicks dancing.” So not so empowering after all.

There have been amazing female singers and girl bands that have been all about power and strength –  but the groups most often listed as being about “Girl Power” today are really all about getting their gear off and pouting. Pussycat Dolls? Empowered? I don’t see it. Dobson explains it thus:

On an intellectual level, their gimmick has been reinventing burlesque dance and transposing this concept to modern pop by employing a post-modernist remix culture ethic to the reinterpretation of the musical art form. Essentially they’re a really pretty KLF, or the Vengaboys with production values.”

What the? Not sure I follow. Don’t follow his argument on why the Pussycat Dolls are a group that showcase “Alpha Divas” either-

If anything, the alpha diva of the Pussycat Dolls is any one of their many celebrity guests. Paris Hilton, Scarlett Johansen, Cameron Diaz, Britney Spears … the list goes on. Pretty much anyone vaguely female, famous, attractive and living in Hollywood has made an appearance with the group.”

So all we need to be “empowered and alpha” is to be female, attractive and star struck? Brilliant. NOW I can see why “Total Girl” magazine would have included the Pussycat Dolls on their made-for-tweens CD compilation: 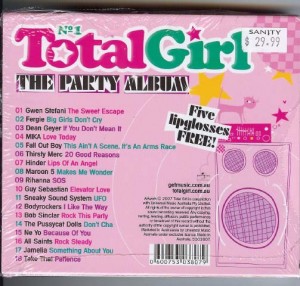 Comes with free lip glosses too – for added empowerment.