When I first started working in schools with young women to give them the skills they need to move beyond mean girl machinations and body image blues, I envisioned I’d be working only with high schools. The frequent SOS calls from primary school teachers soon made it apparent, however, that this type of proactive work needed to start in Year 6.

And yet in the past twelve months, it’s been Year 4 girls that seem to be causing the most concern. Although it is well known that relational aggression tends to peak in the middle school years (Year 5-Year 8) this demographic does seem to be more vulnerable than ever before.

1. A significant number of girls are hitting adolescence at a younger age. Over the past 20 years, the average onset of menstruation has dropped from 13 years to 12 years and seven months (although it is increasingly common for girls to start menstruating as early as eight and nine years of age). Significantly, the hormonal surges associated with puberty, known as adrenal puberty, will be happening even before any physical traits become apparent and can cause heightened emotions. There is also often a divide that forms between girls who may look very childlike still, and others who will begin to look more like young women.

2. Rather than finding childhood carefree, many kids of both genders report feeling overwhelmed. They may be in families that are experiencing financial hardship, or relationship breakdown. With only childlike strategies to fall back on, many can’t cope alone; a recent University of Sydney study found the largest increase in the use of antidepressant medications was among children 10-14 years old.

3. There is increased external academic testing happening in our primary schools. Parenting expert and passionate proponent for play, Maggie Dent, blames NAPLAN for damaging our children. “Too much emphasis in the younger years on testing steals time away from the vital work of play” says Maggie, “and it through child-led play and caring human interactions that we learn how to build relationship and resilience.”

4. The average age for first exposure to porn is 11 years old. The type of messages young people receive about their emerging sexuality via this medium are often both confusing and confronting. One Principal shared with me how a young girl at her school was being asked by a male peer to send nudes, “This little girls was literally playing with dolls one minute, and being thrown into a situation where she had to try to cope with sex based harassment the next.” Parents who bury their heads in the sand and think there’s plenty of time for conversations around sexuality and respectful relationships later are doing their children a dangerous disservice.

5. Social media platforms such as Snapchat and Instagram stating the minimum age to sign up is 13 years. Despite this, surveys have shown that three-quarters of children aged 10-12 years have ignored the age limit, many without any parental guidance or monitoring. While we tend to be (rightfully) alarmed at the possibility of our girls being groomed by predators online, or bullied by their peers, we put far less thought into how we can support them to make sense of the narrow definition of beauty and messages around materialism they will be bombarded with when following their favourite influencers. Teachers tell me they are concerned about students in Year 4 who are already dieting, or refusing to participate in swimming as they fear looking fat in their costumes.

Once our girls reach double digits, we might be fooled by their increased desire for independence and more grown-up appearance to take a step back. Yet the reality is they still desperately need us to hold their hands just a little longer and support them to safety navigate the path to womanhood.

This post was first published in The Daily Telegraph, 8/9/18. 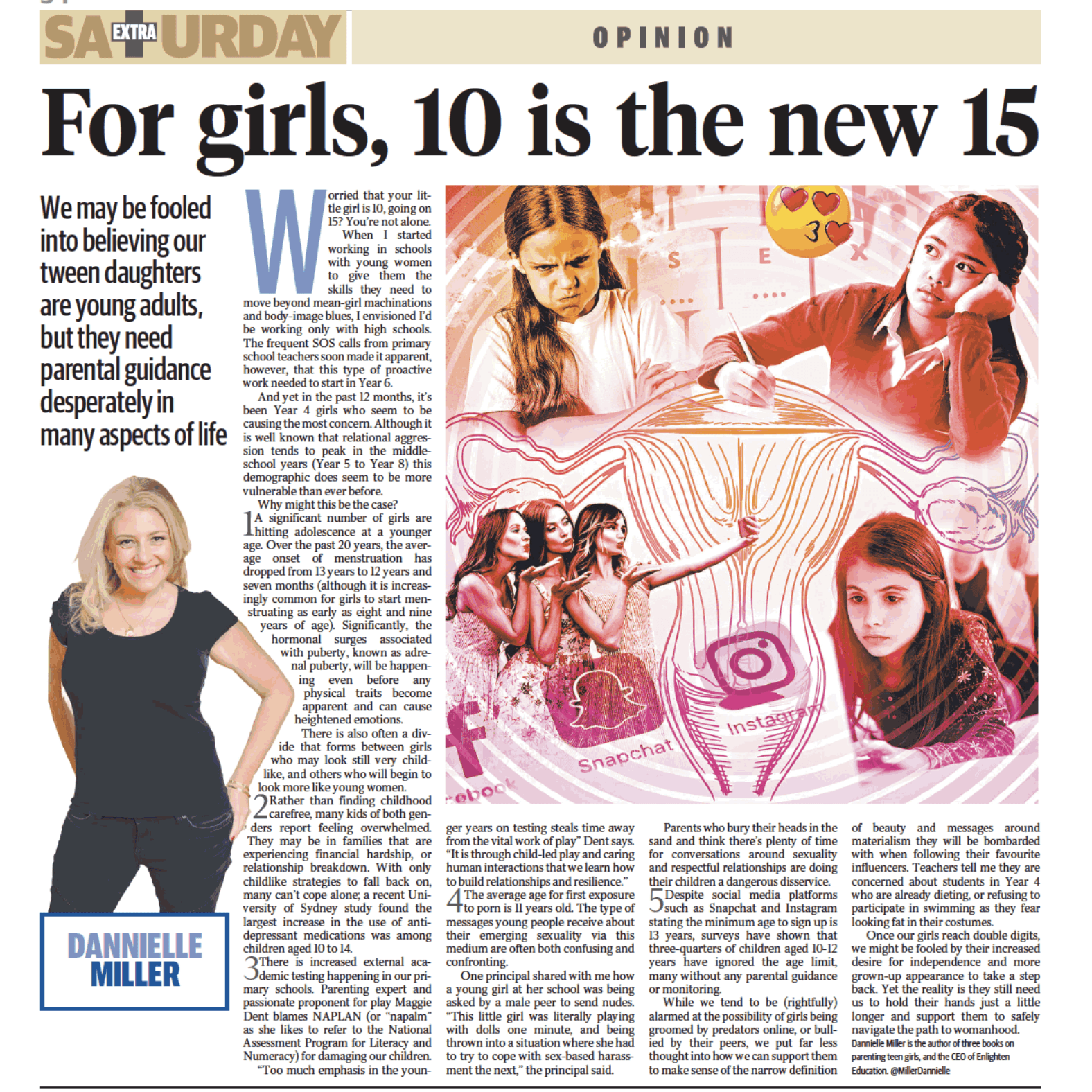