This is the Fashionista Generation. Chalk it up to Gossip Girl or Next Top Model or all those banks who handed out credit cards like they were candy — whatever the reasons, designer labels have become a part of our culture. We use them to fit in, to stand out, to create a glow of status and power.

Girls use brands to look more mature and hip; their mothers, to look more youthful and hip. This makes the marketers very, very happy. And it leads to some really creepy crossovers. Christian Louboutin — the French cobbler who only the fashion elite had heard of until Sex and the City but whose red-soled shoes all suburbia now lusts after — recently designed Barbie shoes for women. And women’s shoes for Barbie. The Barbie fantasy (or nightmare, depending on your point of view) is now reality: you and your teen daughters can walk in Barbie’s hot-pink stilettos, and she can walk in yours. At last, the circle is complete! The plastic woman and the living, breathing one are united. Childhood and adulthood have merged.

It’s rather pitiful, really, that in order for poor Barbie to be perfect enough for Monsieur Louboutin, she had to get cosmetic surgery on her “cankles” (a word in my top ten list of loathsome fat-talk terms it’s time we pledge to never use again). Barbie was already dangerously thin, people! If a real woman had her figure she would be classified anorexic and she would be unable to menstruate or have children. I thought we all knew that by now. Apparently the fashion world didn’t, because her grossly cankulous lower limbs needed to be made even more slender to be deserving of the designer’s shoes. On one level, it’s tempting to shrug this off as utterly ridiculous, just some designer who’s totally out of touch with reality behaving silly, but the fact that Mattel — a manufacturer of toys for children — indulged his whims actually makes me furious. Deep down, this is the message it sends to girls and women:

You’ll never be good enough. In fact, it turns out that the unrealistic ideal woman isn’t even good enough. 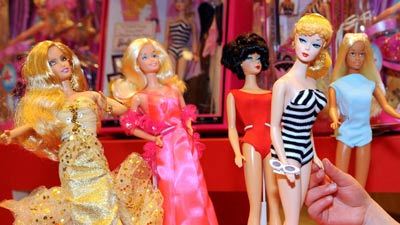 How often has a day of clothes shopping turned toxic for you or your teen daughter? It can be daunting to see the racks filled with sizes that seem suited only, in fact, to a Barbie doll. What do you tell yourself in the changing room mirror? You wouldn’t be alone if you have fallen prey to some pretty self-hating thoughts under the fluorescent department store glare. There are women and girls who buy clothes a size too small for them so they will feel compelled to lose weight. Women and girls who unthinkingly repeat the old chorus “Does my bum look big in this?” as they twist to look at themselves in the mirror. Women and girls who feel ashamed because they aren’t the “right shape” for the latest designer label offering, as though there ever has been, or ever should be, such a thing as the “right” shape.

The tragedy is that too many women and girls diet to fit themselves into “must have” fashions, or they work themselves into an epic neurosis because they can’t achieve the look they see in fashion magazines and on billboards. That ideal look is achievable for only a tiny number of people (models are thinner than 98% of the population), or it is unachievable at all because it isn’t even real. Ralph Lauren recently Photoshopped model Filippa Hamilton to such an extreme degree that they made her look more like an insect than a woman. 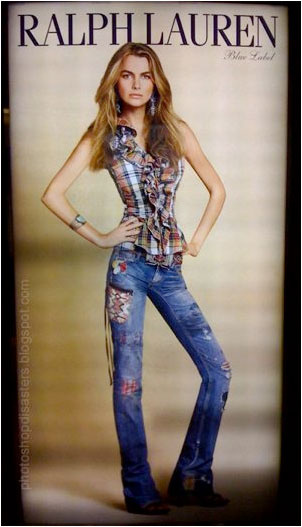 It’s not a good example when you see this picture; every young woman is going to look at it and think that it is normal to look like that. It’s not . . . It’s not healthy, and it’s not right.

This was one of the final jobs she did for the company. She says that after 8 years of modelling for Ralph Lauren, they decided she was too fat for their clothes and cancelled her contract. Reality check: Filippa Hamilton, too fat for Ralph Lauren, is 178 cm and 54.5 kg, or 5′ 10″ and 120 pounds.  I’m sorry, Filippa, but  even before this deranged level of Photoshopping, your weight was not normal and healthy; you were already well into the underweight category of the healthy weight range.

Too many women and girls are berating and belittling themselves for being unable to fit into or look good in clothes modelled by skeletal models. I like nice clothes and shoes. I like to feel good when I walk out the door in the morning. And I don’t have a problem with people wanting to be fashionable. What I do have a problem with is clothing companies that make girls and women feel badly about themselves and talk badly about themselves. I have a problem with the fact that in many cases, women’s fashion is designed by male designers who probably know as much about building a rocket ship and flying to the moon as they do about the real lives of real women and girls.

What if we all make a pact not to buy fashion labels that make us feel less than beautiful? What if we say no to marketers who try to make us feel that we will never be good enough? They will  have no choice but to change their products and the way they market them.

During Fat Talk Free Week let’s transform the negative self-talk in the changing room into something far more constructive. Instead of punishing ourselves for not fitting into fashion designers’ narrow ideal let’s demand that fashion designers cater to our needs. And let’s choose to celebrate our differences and our unique qualities — rather than trying to squeeze them all into those designer jeans.

9 thoughts on “Fat Talk and the Fashionista Generation”