What do a cage fighter, a quantum physics professor and an award-winning crime novelist have in common? They’ve all messed up – and learned a lot in doing so

“It was like I was in a nightmare. I just froze in front of millions of people. I was in the cage, fighting, and I could see my opponent throwing punches at me, but I couldn’t move; they were just slamming into my face. In between rounds my coach was talking to me and I could see his lips moving, but I couldn’t hear what he was saying. I went from being the biggest thing to come out of Australia to fight in Las Vegas for the Ultimate Fighting Championship [UFC], to being the worst fighter ever.”

In 2007, Soa “The Hulk” Palelei, a mixed martial artist who competed in the heavyweight division for the UFC, lost his first major fight against Eddie Sanchez in the third round by a technical knockout. His fighting contracts with the promoters were cancelled immediately afterwards.

“Before the fight my hotel room had been filled with people. Hollywood celebrities like Adam Sandler and Kevin James had been high-fiving me, telling me I was the man. Afterwards, I sat in my hotel room all alone; I thought, “Well, now where is everyone?” No one would even answer my calls, so I had to make my own way to the airport and fly home by myself. The whole flight back to Perth, there were so many things in my head. I was abused as a child, beaten up. I was homeless for months as a kid. And now? I felt even more ashamed and useless.”

Why is it that the feeling of shame that so often accompanies a mistake can be the most destructive of all human emotions? “It can damage a person in ways that no other emotion can,” explains Dr Natalie Ferres, who has a PhD in psychology and researches emotional intelligence, resilience and self-management. “Guilt or regret can be fine if you acknowledge lessons, take accountability and move on, but if someone experiences enough shame? They can become self-loathing to the point that they become self-destructive. It can even cause neurobiological damage. We know some of the neurochemical correlates of shame and how it literally gets stuck in our brain circuitry.”

For Palelei, his initial response to failure was to compulsively both read the online hate directed towards him. Oh, and to eat. “At one stage, I was up to 160kg.”

Crime writer Candice Fox says the years of rejection she experienced when first trying to find a publisher for her four books led her to being “in the biggest hole ever. I had been writing since I was 12 and had written many books, but there were four that I properly pursued publication for and I was rejected by everyone in Australia and worldwide. The rejections felt very personal. My mistake was in how I responded to this. I was so angry, and jealous of other published authors. I saw myself as nothing. Because I only felt powerful when I was writing.

“I had a strange childhood in which I had no real power, which is why I escaped into these imaginary worlds I created through my writing. My mum had six kids of her own and would also foster kids. So there’d be 12 or 13 kids in the house and you’d sometimes want to go and hug your mum and you just couldn’t, as there’d be some traumatised kid upset as their parents may have just been arrested and they needed her more. It made high school rough. These kids would bring in not only their own life traumas, but as some had been neglected they might have lice, or ringworm or hand, foot and mouth disease. I’d get all this, too. So I was this weird kid with nits who came to school in a minibus filled with children, who just liked to sit by herself and write stories. And I thought, ‘But if I can’t get published and become a writer, then who am I?’ I definitely felt shame.”

During his time at a top-tier management consultant firm in the US, Michael Biercuk, a quantum physicist who is now an associate professor at The University of Sydney, says he looks back “with self-disgust” at how he interacted with his colleagues. “My mistake was profound. I did what [someone with] a PhD in science would do; I spoke honestly about our organisation’s shortcomings and provided potential solutions that I thought would improve the business without any kind of radical restructure. But I completely failed to understand either the local workplace culture or how my comments might be perceived by others, especially peers and supervisors. It became me parachuting in with the solution in hand and effectively saying, ‘All of you have been wrong all along.’ And that was exactly what my failure was. Despite education at some of the best universities, I was never taught the basics, the fundamentals of business interaction or social psychology. My peers and some managers saw me as a troublemaker and some even considered me a traitor to the firm.”

Like so many who look back at their mistakes with newfound clarity, Biercuk says that he eventually gained some clarity from choosing to see what had happened from his colleagues’ perspective, and from reframing it as a learning opportunity. “Over the course of many years developing as a professional, I’m continuing to refine my ability to mitigate my natural tendency to just give an answer and think more about how I can build consensus.”

For Palelei, shame was eventually replaced with grit; with hard work, optimism and a goal: to return to fighting for the UFC.

“One day I woke up so heavy I could hardly breathe. And I thought, ‘You will die like this, dwelling on that mistake.’ So I snapped out of it. I knew I had to get back to the UFC. I knew if I could just get back there I would know exactly what to do this time and how I was going to do it. I never crawled my way back. You know how some people say you have to crawl before you walk, walk before you run? I was sprinting. I would walk into the gym and just demolish everything. I was pushing, hustling, grinding. And every night I would visualise what would happen when I stepped back into that cage.

“I was single-minded; although I was winning title belts in other competitions, they were just something to pull my pants up with. It was all focused on being back to the UFC. After I won three fights, they still said, ‘No way!’ After five, six, seven more wins, they said, ‘No.’ And I thought, well at least they didn’t say ‘no way!’ this time. Just a no is better. After my tenth win, they said, ‘OK.’”

Palelei stepped back in to the Octagon in 2013, six years after his initial defeat. This time, he won. In total, Palelei has won four out of his seven UFC fights (including one where he fought with a fractured rib he’d suffered during training beforehand).

Paradoxically, it’s the more exacting world of science that may provide a model for how we can best foster cultures where it’s not only OK to make mistakes, but valuable to discuss them openly. In discussing his work in academia, Biercuk explains, “There is a huge value placed on very transparent, brutally honest discussion. Everybody is trying to work to the solution of some technical problem; somebody puts up an idea, somebody else says no that’s wrong for the following reason, and everybody is kind of OK with that. If I say something at the whiteboard in a discussion with colleagues that’s not correct, somebody will show I’m not correct and I’ll just have to accept it, move on and know this happens to everybody.”

In other words: we all make mistakes. One of the ways in which we can move past these is through the sharing of our less-than-positive stories. These not only act as instructive, by helping others from making the same errors, but as protective, by minimising the dark shame that can make a person feel like they’re bad or worthless when, really, like us all, they’re only human.

Like Palelei, Fox also used movement to push through the feelings of failure. “I got into the gym and started running. That was so good for my mental health.” Like Biercuk, she was adaptable and willing to learn: “I went to TAFE to study creative writing, and then later to uni; I did an honours and a masters.” She also shifted her perspective: “I went from picturing this great big club of writers that I was excluded from and watching them from a window outside, to thinking, ‘How can I get better at learning this craft?’”

Fox secured an agent and within days had two major publishing houses fighting over her books. She is now published by Penguin Random House and in 2014 won a Ned Kelly Award (honouring Australian crime writing) for her debut novel Hades. Her second title, Eden, won another in 2015, and she was shortlisted for this year’s Ned Kelly for her third book Fall.

Ferres argues, however, that it’s not so much the ultimate moments of triumph that make stories like these appealing, as it is the sharing of vulnerability. “Our big mistakes, aired to others, can make us appear more human, particularly if we show that we’ve learned from them. We can also be inaccurate when guessing other people’s reactions – many people respond positively to those who admit mistakes. Presenting an idealised version of ourselves separates us from others and we miss out on true connection.” 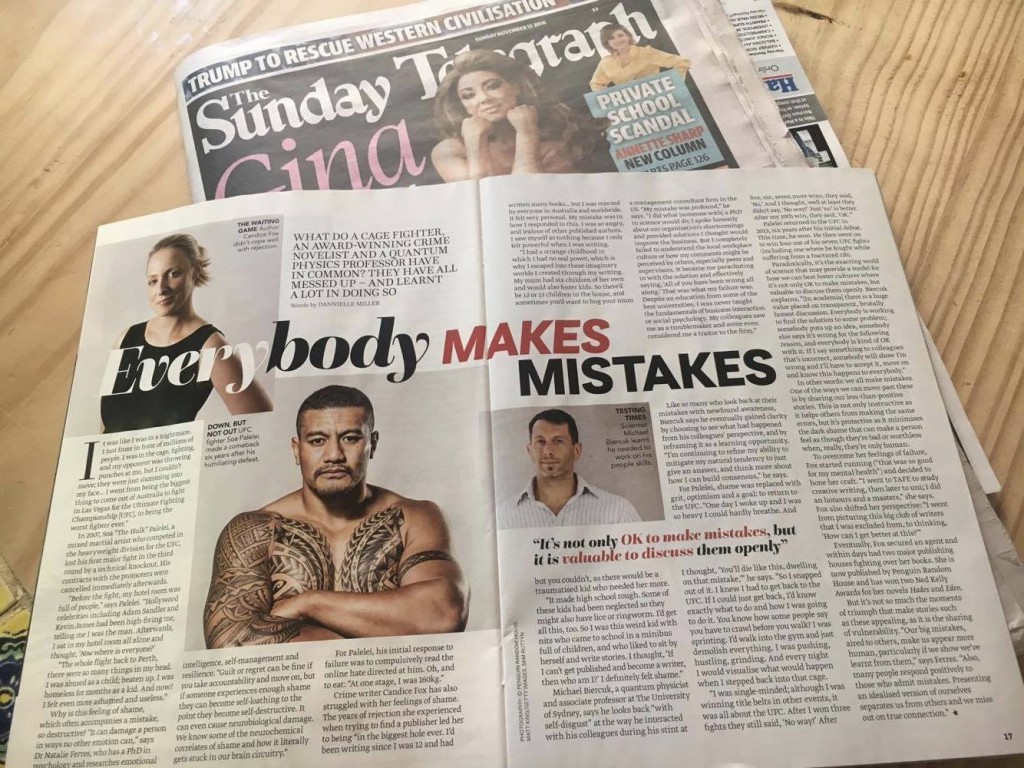 This was originally published in Stellar magazine, which appears inside The Sunday Telegraph (NSW), Sunday Herald Sun (Vic) and The Sunday Mail (Qld). Although it is not directly related to the topics I usually post about here, I think there is much to be gained from sharing stories around resilience and perseverance – especially with young people.