I was really interested in the findings of a study conducted by Janet Hyde, a University of Wisconsin-Madison professor of psychology, and Janet Mertz, a UW-Madison professor of oncology, on girls and mathematics. They analysed studies from around the world on mathematics performance along with gender inequality as measured by the World Economic Forum’s Gender Gap Index. Their conclusion? Girls do understand mathematics, but we don’t want them to.

Their research showed that the widely held belief that most women aren’t hard-wired for careers in science and technology is erroneous. Rather, the researchers provide several possible cultural factors keeping females from excelling in maths, including classroom dynamics in which teachers pay more attention to boys, while failing to nurture even mathematically gifted girls. In addition, they found stereotypes may drive guidance counsellors and others to discourage girls from taking engineering courses. The lack of female role models in maths-intensive careers was also identified as a possible reason why girls may steer clear of these paths.

I confess that I once said to my daughter when she was struggling with maths, “You’re just like your mummy. We both love reading and writing but find maths and science tough.” Way to go, Danni. What kind of message was I sending Teyah? The same message Mattel’s Barbie gave girls when she spoke her first words in 1992: “Math class is tough!” How limiting. Throughout history there have been accomplished women across all fields of learning. We need to take every opportunity to remind our daughters of the many women who have achieved academically. 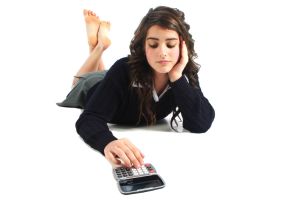 The following websites may be worth encouraging your budding maths star to explore:

Girlstart – American site created to empower girls to excel in mathematics, science and technology. They have an interesting blog and a related website where girls can complete maths-based puzzles, etc.

An extensive list of general maths sites is also offered at the South Australian Department of Education and Children’s Services site: http://www.millnthps.sa.edu.au/websites/mathematics/general_maths.htm

Even the most simple empowering messages we give girls can have a lasting effect on them. Fifteen years ago, Rachel, who is now a grown woman, was in a class I taught at high school. She recently emailed me to share the following: “I still remember the first thing I noticed when I walked into your classroom in Year 10: a sticker on the top of the board that said ‘Girls can be engineers too.’ Yours was one of the few classrooms where I believed that I could achieve something.”

I’d love to hear how you have been encouraging girls to move beyond all sorts of limiting stereotypes.

One thought on “Embracing her inner mathematician”