Last week the Herald Sun reported that children as young as seven are being hospitalised with eating disorders. Equally as alarming, The Children’s Hospital at Westmead’s eating disorders clinic, which specialises in working with people aged seven to 17, has experienced a 270 per cent increase in admissions since 2000.

The crew at Kerri-anne asked me to come on and discuss this worrying trend with viewers yesterday. I asked for Melinda Hutchings — an eating disorders survivor, ambassador for The Butterfly Foundation and author of the incredible Why Can’t I Look The Way I Want?: Overcoming Eating Issues to accompany me to offer her personal insights.

As is always the case with live breakfast television, there wasn’t enough time to offer all the insights we would like, so I have asked Melinda to be my guest blogger this week. 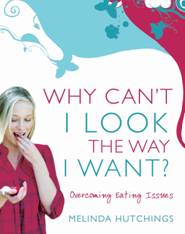 A study published in the Medical Journal of Australia in 2009 found that between July 2002 and June 2005, 101 children aged from five to 13 years old were newly diagnosed with an eating disorder. About two-thirds were affected by anorexia nervosa; the rest were experiencing “food avoidant emotional disorder”, a condition unique to children, which involves extreme weight loss driven by high anxiety levels, rather than wanting to be thin.

And according to a 2003 study of 135 South Australian children conducted by Professor Marika Tiggemann, of the School of Psychology, Flinders University, two-thirds of girls in year 1 believed that being thin would make them more popular. Even more believed weight gain would attract teasing.

Children spend much of their early lives at school, an environment that can be competitive, with hierarchies often based on physical appearances. A negative fixation on weight and size potentially lends itself to self-destructive thoughts and behaviours, which can be triggered by situations, comments or events that bring up feelings of anxiety and worthlessness. These include family arguments related to eating (e.g. “You’re not leaving the table until you’ve eaten everything on your plate”), feelings of being misunderstood, rejection by peers (e.g. “Go away, we don’t want to play with you”) or feeling like a misfit.

Negative emotions can lead to unhealthy thought processes and feelings of insecurity around body image. If left undetected, these feelings can lead to the onset of an eating disorder.

In my book Why Can’t I Look the Way I Want?: Overcoming Eating Issues, there is a chapter dedicated to the early warning signs. These signs are often subtle and can be passed off as “normal” behaviour – unless you know what to look for. Common warning signs include avoiding eating in front of others, making excuses to avoid family meal times, obsession with food preparation and a change in attitude towards food, e.g. becoming vegan or cutting out entire food groups under the guise of wanting to be “healthy”. In addition, ritualistic behaviour when eating, such as cutting food into tiny pieces, insisting that meals are eaten at a particular time each day or obsessive use of the same crockery and cutlery is cause for concern.

There are also warning signs before the warning signs. If a child is constantly complaining of headaches and tiredness, or appears to have trouble coping at school, this could indicate there is something deeper going on. Emotional issues, including feelings of inadequacy, often manifest as physical ailments, so stay aware of any symptoms that persist or behaviour that indicates difficulty coping, such as falling behind in class.

Becoming vigilant about the early warning signs means there is a very real chance of catching the behaviour before it spirals from an eating issue into an eating disorder.

Here are five tips for parents and carers:

1. Eat with your child as often as you can so that you become familiar with their eating habits.

2. Watch for changes in those habits, especially anything that appears unusually strict and lasts for several weeks.

3. Listen to the language your child uses around food. If they start talking about diets or calorie contents, or complain that they are fat (when they’re not) this is a red flag.

4. Watch for a change in disposition. If your child displays hostility around meal times, they could be experiencing internal conflict towards food.

5. If your child eats large amounts of food constantly but doesn’t realise how much they are eating and/or aren’t enjoying it, especially during times of stress, this could indicate obsessive eating.

In the event your child begins to display an aversion towards food and changes in their eating patterns, seek medical advice as soon as possible so that they get the right treatment without delay. Early intervention is critical in reframing the mindset before it becomes entrenched.
Melinda Hutchings